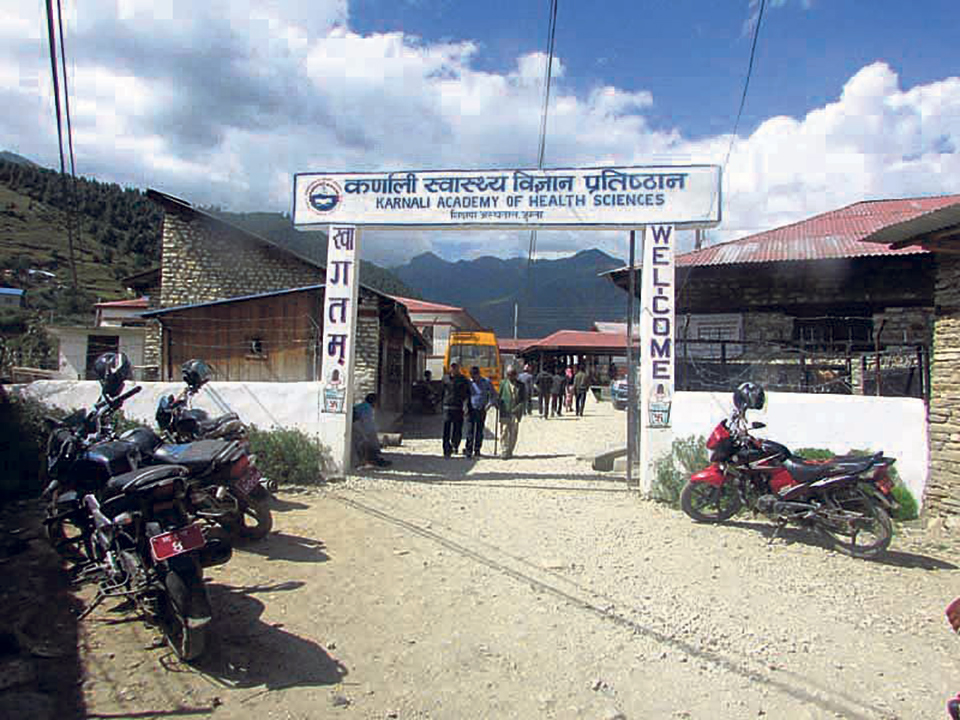 JUMLA, Sept 2: Laxmi Prasad Devkota, a local of Jumla, had no option but to spend hefty amoung and travel all the way to Surkhet and Nepalgunj for treatment whenever he got sick. He never imagined in the wildest of his dreams that his home district would ever get a good hospital. But Karnali Academy of Health Sciences, which has been operating since the last eight years, proved him wrong. It has been attracting patients from several districts now.

"Not just the patients from far-flung villages of Karnali but also from the bordering towns now come to the hospital," he said. "You get good service and the fees are affordable," Devkota added.

The hospital has given respite to many people in the far west. Madan Mahat of Bajura, who was at the hospital last week for the treatment of hernia, was more than happy. "I had heard from many that Karnali Hospital offers quality service. Now I could experience it," he said.

Mahat is going to promote the hospital in his hometown. “Everyone should know about the quality service. There are many people who undermine this hospital and seek treatment elsewhere and even go as far as India. That incurs huge amount of money and time," he noted.

Amit Sarki, 65, from Nepalgunj is another man who has been greatly impressed by the hospital. He was at the hospital to remove stone from his bladder. And to his surprise, the treatment was first class. "I simply had no idea that it would be so much hassle-free. I had anticipated something else," said Sarki, who returned home from Jumla on Friday.

Sarki also praised about the hospital's location and the climate. It will not take long for the hospital to become 'the best' in the region, he claimed.

Patients from Bardiya, Sindhuli, Banke, Surkhet and Jajarkot among other districts feel the same about the hospital. 'High-quality service at negligible fee' has made it quite popular among the service seekers.

According to Min Bahadur BK of Bardiya, the hospital is already the number one in the region. "There is no need to go anywhere else for treatment when you have such a hospital here," he said. BK was recently at the hospital to fix his fractured leg.

When this hospital was established under the Karnali Academy of Health and Sciences in 2011, it lacked staff and equipment. Patients would not get even medicines. "That was in the initial years. But now, things are totally different," noted a local of Jumla, Umesh Pariyar.

The major reason behind the hospital's success is the production of necessary human resource by the academy itself. Students enrolled in the academy for medical studies have to serve here for some time. The hospital has its own oxygen plant and many other basic pre-requisites.

As per the hospital's data, 269 people from outside the district received service from the hospital in the last one year. The academy has also been running mobile health service at five districts of Karnali including Jajarkot, Rukum and Achham.