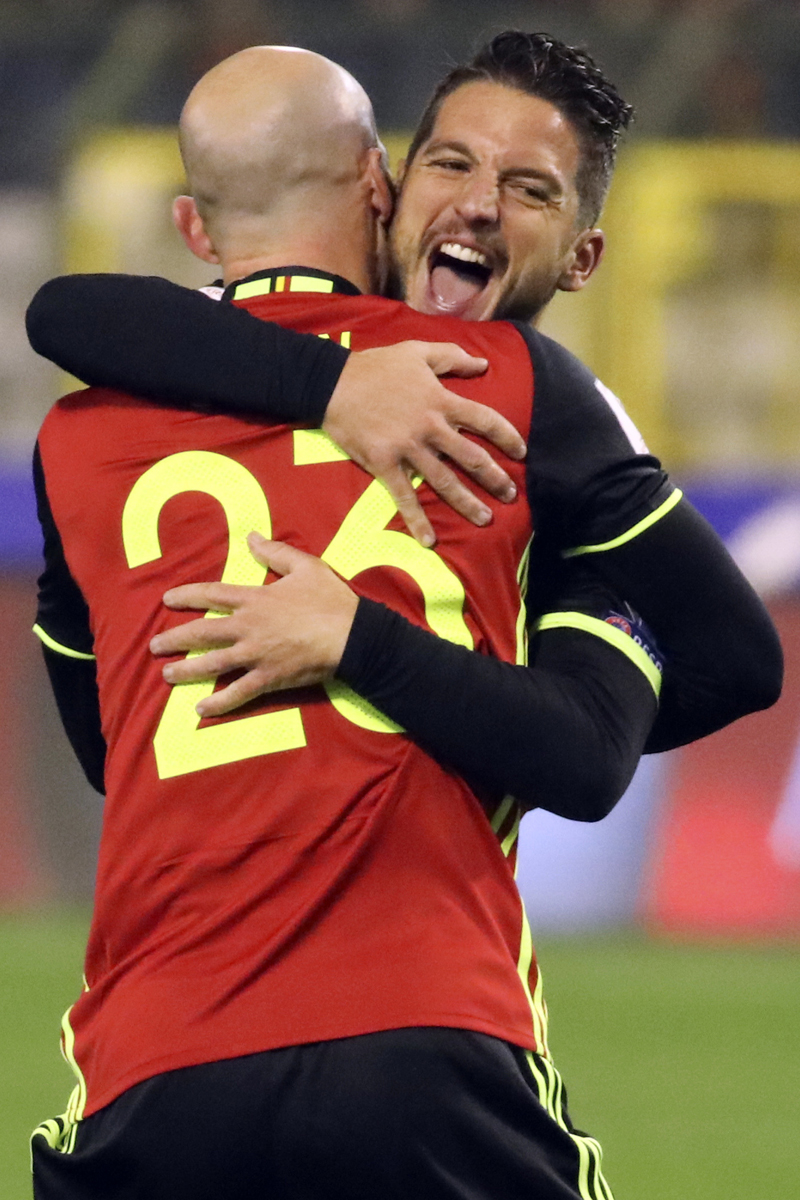 Belgium, which beat Estonia 8-1, and Switzerland extended their perfect starts to join Germany as the only European teams with four straight wins on the road to Russia.

Switzerland's 2-0 win over the Faeroe Islands ensured it stayed top in Group B from prolific Portugal, which beat Latvia 4-1. The European champion has 16 goals in its past three matches, including seven for Ronaldo.

Still, Belgium's 21-goal tally is Europe's best, and Eden Hazard and Romelu Lukaku were both on target in Brussels.

Two big names returned to the scoresheet for the Netherlands in a 3-1 win at Luxembourg. Arjen Robben was playing his first international game this year, and Memphis Depay scored twice.

Only group winners advance direct to the 2018 World Cup finals, and four runners-up will go to Russia through a playoff round.

Here is what happened on Sunday:

The Netherlands closed the gap on leader France only after conceding a goal to Luxembourg for the first time in 53 years.

Arjen Robben returned to national duty after a year sidelined by injuries with a trademark goal in the 36th minute, cutting in from the right and shooting low into the far corner.

The Bayern Munich winger's return was ended after only 45 minutes, by which time Luxembourg had leveled from the penalty spot through defender Maxime Chanot.

"It's a great shame," said Robben, who was advised not to take risks with a small cramp. "I wanted to play."

France, which beat Sweden 2-1 on Friday, leads by three points from the Dutch. Sweden is third on goal difference.

It was an eventful evening for Cristiano Ronaldo in Faro.

He scored one penalty in the first half, missed another in the second, scored again, and struck the Latvia crossbar with a late header inPortugal's 4-1 win.

After Ronaldo's 59th-minute spot-kick struck a post and bounced away off the goalkeeper's legs, Latvia even leveled in the 67th through substitute Arturs Zjuzins.

Portugal substitute Ricardo Quaresma then crossed for William Carvalho to restore the lead and Ronaldo make the win safe with a volley. Defender Bruno Alves added a fourth in stoppage time.

Leader Switzerland was often labored in beating the Faeroe Islands 2-0, with goals in each half from recalled forward Eren Derdiyok and captain Stephan Lichtsteiner.

The Swiss, which beat a Portugal team without Ronaldo in September, is three points clear.

Earlier, third-placed Hungary beat Andorra 4-0 and has seven points before traveling to play Portugal in March. Then, Switzerland will be favored to beat Latvia at home.

While group leader Belgium was crushing Estonia, the dramatic tension unfolded in Athens.

A last-gasp goal by Giorgos Tzavelas allowed Greece to keep its grip on second place with a fiery 1-1 draw against Bosnia and Herzegovina.

Both teams ended the game with 10 men, with Kyriakos Papadopoulos getting a red card for striking Edin Dzeko — in his attempts to wrestle the ball away — and Dzeko getting a second yellow card for pulling Papadopoulos' shorts down.

Bosnia, which dominated most of the game, led in the 33rd when Miralem Pjanic's free-kick bounced off the right post and then goalkeeper Orestis Karnezis' back before finding the net.

Tzavelas scored with a blistering shot outside the area in the fifth minute of stoppage time after Bosnia's defense only half-cleared a long throw-in.

Greece trails Belgium by two points before the teams meet in Brussels on March 25.

Belgium followed up its 6-0 win over Gibraltar by going three up in 25 minutes in Sunday, through Thomas Meunier, Dries Mertens and Hazard. Estonia reduced the deficit before half time.

Belgium added five more in the second half, including a second for Mertens and two late goals for Lukaku.

Cyprus beat Gibraltar 3-1 in the group's other game.

SEVILLE, June 27: Their back three may have a combined age of 101, but Belgium's defence stood tall against the... Read More...

Portugal's Cristiano Ronaldo celebrated his Madeira homecoming with an early strike but Sweden wrecked the party by hitting back from... Read More...