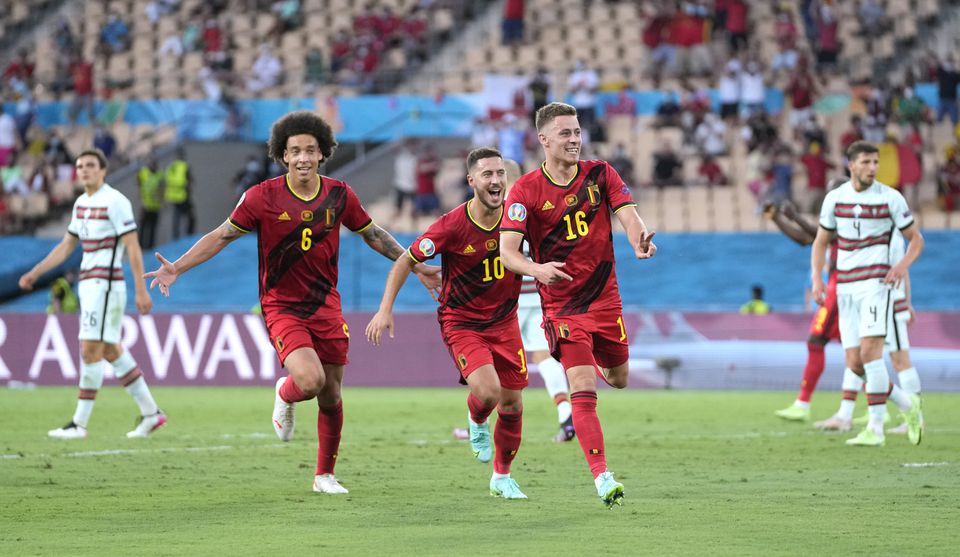 SEVILLE, June 27: Their back three may have a combined age of 101, but Belgium's defence stood tall against the attacking might of Portugal as Roberto Martinez's side proved they have the grit as well as the talent to win the European Championship.

Belgium's 1-0 win over holders Portugal in Seville, settled by Thorgan Hazard's first-half howitzer, was far from pretty as the night's big last-16 tie largely failed to live up to its billing.

But as Portugal's Euro 2016 winning campaign proved, you do not always have to play pulsating football to win a major tournament, and Belgium took a major step forward here that stands them in good stead for the rest of the tournament, especially with Italy awaiting them in the quarter-finals.

Belgium's array of attacking talent and run to the 2018 World Cup semi-finals put them among the favourites for this Euros although doubters pointed to their ageing defence, which looked like being their Achilles heel.

Fears they could get caught out by a record-hungry Cristiano Ronaldo were heightened when 35-year-old Thomas Vermaelen, who is seeing out an injury-stricken career in Japan, was picked at the heart of the defence along with Toby Alderweireld, 32, and Jan Vertonghen, 34.

But an outstanding team effort meant Belgium kept Portugal at bay, even with Fernando Santos' side firing 23 shots at goal, the most of any team at the tournament without scoring.

"What you saw today was years of commitment, years of giving everything, and the commitment they have with the Red Devils is incredible," Martinez said of his back three.

"The talent they have makes the duty of defending an art. This game should be shown in the academies of Belgium of how to defend."

But the performance was not just down to the veteran defenders.

Axel Witsel and Youri Tielemans did a superb screening job in a double pivot in front of the defence, while wingbacks Thomas Meunier and Hazard were able to get forward without ever getting caught out.

While the game will be remembered for Hazard's unstoppable thunderbolt, he also worked his socks off in defence when Belgium defended astutely in the second half.

Thorgan's older brother Eden was also outstanding, taking the pressure off his side with the skill and control for which he is renowned, although there was concern he had suffered yet another injury when he limped off late in the game, after Kevin de Bruyne had been forced off with an ankle problem.

Dangerman Romelu Lukaku was not given a huge amount of service but did an invaluable job in holding the ball up and was happy to knock down and control long passes to keep Portugal on their toes.

"We never lost concentration, there were difficult moments, and the way Portugal tried to get the victory until the last minute gives me a lot of satisfaction," added Martinez.

"This is what a winning team needs. We all know the talent and good football we can play, but today we showed all the other elements you have to show. As a coach I couldn't be prouder."

Ronaldo to try to make more history at Euro 2020

Seville, June 27: Cristiano Ronaldo will be trying to make even more history at the European Championship when Portugal takes... Read More...

Four arrested with Red Panda hide, two others with musk
18 hours ago