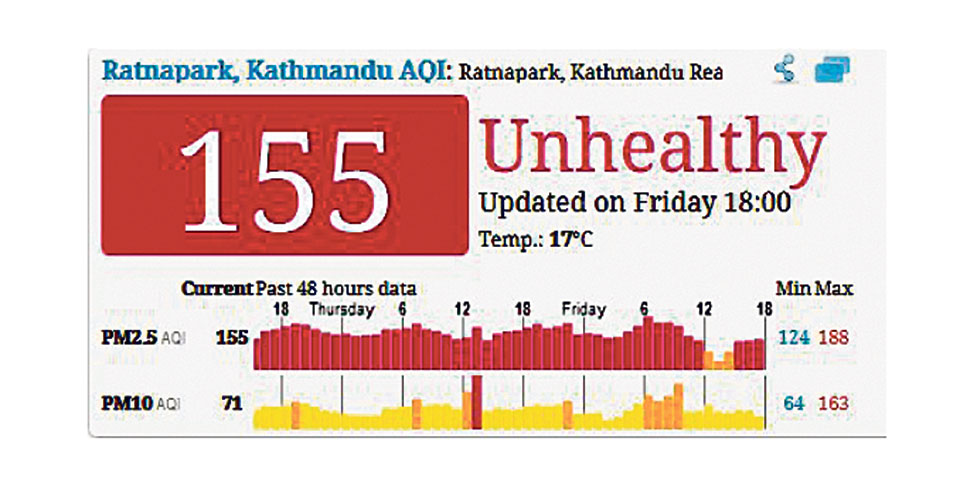 ‘Increases the chances of dementia’
KATHMANDU, Nov 23: Kathmandu sees a sharp rise in air pollution levels during winter months. The city is enveloped in dust and smoke. The seven Air Quality Monitoring Stations, spread across the Valley, have already begun showing “unhealthy” Air Quality Index (AQI) readings, as evident in the data of the last seven days.

“PM2.5 levels have already risen to unhealthy levels in most of the stations in Kathmandu,” says Rajeshwar Poudel, an environment inspector at the Department of Environment, under the Ministry of Forest and Environment.

Particle pollution, also called particulate matter (PM), is a mixture of solid and liquid droplets floating in the air. Coarse dust particles (PM 10) are 2.5 to 10 micrometers in diameter. Fine particles that are 2.5 micrometers (PM 2.5) in diameter or smaller, which can only be seen with an electronic microscope, include particles produced from all types of combustion, including motor vehicles, residential wood-burning, forest fires, agricultural burning, and some industrial processes. Experts say they can penetrate deep into the lungs and irritate and corrode the alveolar [a hollow cup-shaped cavity found in the lung tissue where gas exchange takes place] wall, and consequently impair the lung function.

With the AQI readings exceeding 150 in a majority of the stations in the Valley, the pollution level is flagged as “unhealthy” with a red sign. “As ozone level is only measured in Ratnapark and other two stations -- established in Phohara Durbar and US Embassy premises in Maharajgunj,  the AQI is mainly determined by the level of PM 2.5 in Nepal,”   informs Poudel.

Besides Kathmandu, another 13 stations are operational in urban areas across the country.  These stations provide real-time data on pollution levels, offering rich information to study potential health effects of air pollution.

According to Airvisual.com, a Swiss group managed website that collects and analyses air quality data from across the world, AQI for Kathmandu on Thursday morning was 166. The level of PM 2.5 was 85 micrograms per cubic meter or µg/m³, which is double the national standard and four times higher than the WHO standard.

The National Ambient Air Quality Standard Guidelines published in 2012 have set the PM 2.5 standard for Nepal to be 40 micrograms per cubic meter of air while it is 120 µg/m³ for PM 10.

The data from Airvisual.com shows that Kathmandu is ranked 100th most polluted city. Kathmandu’s air pollution (PM2.5) increased from 45.9 micrograms per cubic meter in 2017 to 54.4 in 2018, which is an increase of 19 percent.

Worse, air quality and polluted city ranking by Airvisual.com shows that Kathmandu is the seventh most polluted city with 166 US AQI  as on 21 November 2019.

“The current level of pollution in Kathmandu is toxic to human health with women, children and outdoor workers affected mostly and pollution has contributed to a rise in non-communicable diseases in Nepal,” said Dr Megh Nath Dhimal, a senior research officer with Nepal Health Research Council.

The World Health Organization in 2016 reported that the deaths due to ambient air pollution, mostly in urban areas like Kathmandu is about 9,943 per year. According to Breathlife, a partnership campaign of WHO, UN Environment, World Bank and Climate and Clean Air Coalition, a total of 37,399 annual deaths in Nepal are caused by air pollution--that includes both outdoor and household air pollution.

Referring to the NHRC-commissioned comprehensive Situation Analysis of Ambient Air Pollution and Respiratory Health Effects in Kathmandu Valley, 2015, Dr Dhimal added, “The daily averages of PM2.5 which was higher than the national standard have a significant effect on respiratory morbidity mainly on chronic obstructive pulmonary disease (COPD) and pneumonia.”

“Excessive exposure and inhalation of PM 2.5, carbon monoxide (CO) and nitrogen dioxide (NO2 ) lead to upper and lower respiratory tract infections in children and can cause chronic health impacts on adults”  he added.

Professor Dr Shital Adhikari, who specialized in Pulmonary and Critical Care, admits that pollution has contributed to the increase in the number of asthma patients. “The fact that the number of cigarettes smokers has decreased over the years but asthma patients are increasing sharply, shows that the pollution is contributing to the rise,” he said.

Topography vs human geography
Katmandu witnesses a gradual increase in pollution levels from November and this reaches its peak in January. Thanks to the bowl-shaped topography of Kathmandu that restrict the movement of the wind, which forces pollutants to linger in the Valley air.

“Let’s not only blame the topography, we know it’s a challenge. More importantly, it’s human geography which is more responsible for the pollution,” said Ram Prasad Regmi, of the Department of Physics at the Tribhuvan University, whose PhD dissertation is on Kathmandu’s pollution.

However, the weak enforcement of the regulations is a major concern. “Our challenge lies in the utilization of the data needed for responding to the impending threat to human health. We lack strong political will and plan of action to respond,” said Bhushan Tuladhar, an environmentalist.

A draft air quality management action plan prepared back in 2017 is still in a limbo.  The plan has spelled out integrated measures to curb the pollution levels and assess the impact of air pollution on health, environment and economy, and has also included specific recommendations for hospitals, industrial units and brick kilns.

According to the Department of Transport Management, there are over 1.2 million motorcycles and over 300,000 four-wheelers in Kathmandu. Vehicular pollution is one of the major components of air pollution in Kathmandu.

Mohan Bhattarai, an engineer at the department, informed Republica that the department has recently forwarded a new proposal to review the criteria for green stickers for vehicles to make them less polluting. He also admitted that 20-year old public vehicles are still operating in the Valley although the government announced a ban on them two years ago.

Pollution affects human memory
Researchers elsewhere have found that the human memory is damaged by pollution. A landmark research conducted by the UK’s University of Warwick shows that human memory is significantly worse in parts of England with high levels of nitrogen dioxide (NO2) and air particulates (PM10).

“The difference in memory quality between England’s cleanest and most-polluted areas is equivalent to the loss of memory from 10 extra years of ageing,” the University said in a statement.

The research findings will be published in detail in Ecological Journal in March 2020. The University has said the result was consistent with prior laboratory animal studies linking harm to animal brain from air pollution and it contributes to an understanding of a potential transmission mechanism from air quality to risk of dementia.