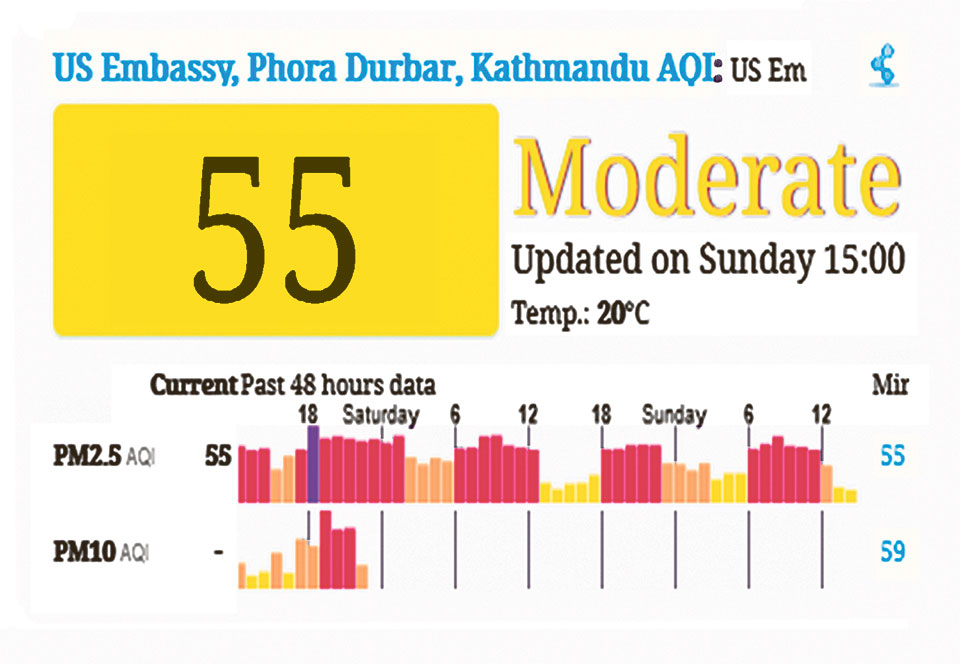 KATHMANDU, Dec 2: Kathmanduites can take a respite from the winter pollution, at least for a few days. And the credit goes to the westerly wind that has blown away the dust particles eastward.

With the absence of fog, smoke and dust from the valley, several mountains including Jugal, Dorje Lakpa and Ganesh among others were clearly visible Sunday.

“The strong westerly wind has brought down the Air Quality Index (AQI) value to a “moderate” level, said Rajeshwar Poudel, environmental inspector at the Department of Environment, Ministry of forestry and Environment, adding, “The PM 2.5 which largely decides the AQI in Kathmandu was also lesser than the World Health Organization (WHO) standard Sunday.”

PM 2.5 measures fine particles that are 2.5 micrometers (PM 2.5) in diameter or smaller, which can only be seen with an electronic microscope, and include particles produced from all types of combustion, including motor vehicles, residential wood-burning, forest fires, agricultural burning, and some industrial processes.

Of the seven Air Quality Monitoring Stations in the Kathmandu, two stations – both run by the US embassy – updated their AQI readings at 55 at 3 pm Sunday. The pollution level is considered “moderate” in terms of the health implications. The AQI ranking is based on the degree of particulate matters (PM) present in the air, along with other pollutants – namely ground level ozone, carbon monoxide, sulphur dioxide and nitrogen dioxide.

“Everyone else: It’s a good day to be active outside.” reads an advisory from the US embassy, which runs these two stations in the Valley – one stationed on the US embassy premises and another at Phohara Durbar. Until last week, the AQI reading was above 150, which is considered “unhealthy” for everyone, and hazardous for children and asthma patients.

The accepted pollution level remained a good news for Kathmandu, which saw the inauguration of the South Asian Games (SAG) on Sunday. President Bidya Bhandari formally launched the 10-day games amidst a grand ceremony Sunday. The odd-even rule for vehicles also eased the vehicular traffic and contributed to reducing the pollution level, argued Poudel.

The Department of Hydrology and Meteorology is also buoyant with the arrival of the strong westerly wind. “The westerly wind, which entered Nepal three days ago caused increased snowing in high altitudes, rains in a few places in the western region and cleared the air in the Kathmandu Valley,” Shanti Kadel, senior meteorologist at the Meteorological Forecasting Division, said, adding, “The next three days would see fair and clear weather in the Valley”.

From December to February the westerly wind dominates the weather with the daytime seeing increased wind speed, added Kadel.

Each year Kathmandu winter welcomes strong westerly winds, said Professor Ram Prasad Regmi, from the Department of Physics, Tribhuvan University, “But this is not a permanent phenomenon, this happens once or twice during the winter. Once the effect of the westerly wind subsides, pollution in the Valley returns to the same unhealthy levels.”

Kathmandu witnesses a gradual increase in pollution from November and this reaches its peak in January. Thanks to the bowl-shaped topography of Kathmandu that restricts the movement of the wind causing the pollutants to linger in the Valley air.