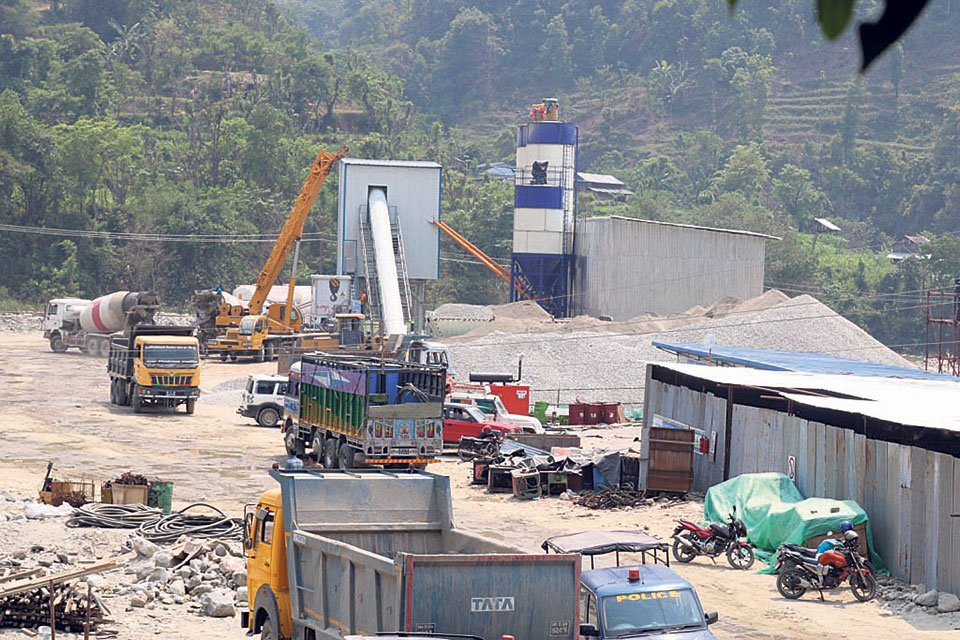 DHADING, Nov 21: The construction of the factory of Huaxin Cement Narayani Pvt Ltd has resumed after being halted for five months due to flood.

About 700 workers have been deployed on daily basis for the reconstruction works, and an additional 600 Chinese workers will be added, according to Pitta Bahadur Dallakoti, chairperson of Benighat Rorang Rural Municipality. “As soon as the festivals were over, 400 Chinese workers including technicians and 300 Nepali workers started working,” he said, “Management of the factory’s physical structure, office buildings, and river is being done in the first phase.” The company has aimed to start production from June 2020.

The company said it will continue construction works by recruiting another 600 Chinese workers and 300 Nepali workers, raising the total workers’ base to 1,600 workers.

The rural municipality has carried out maintenance of the road connecting the highway beside Malekhu River to the construction site. The road was also destroyed by the flood. There was a dispute between Gajuri Rural Municipality and Benighat Rorang Municipality about who would fix the road.

Former Speaker of the House of Representatives Krishna Bahadur Mahara had laid the foundation stone of the factory in March.

The construction site is on the riverbank, and used to be a paddy field that was swept away by floods 26 years ago. The bank area of 400 ropanis was acquired for the establishment of the factory. The rural municipality had provided the company the right to use 300 ropanis of land, but a sub-committee formed by the Public Accounts Committee (PAC) of the parliament had canceled the land lease agreement, stating that leasing the land to the company was unlawful.

The cement factory is being established with an investment of Rs 17 billion, and is claimed to have the largest foreign direct investment in Nepal.

The agreement between Investment Board Nepal (IBN) and the Chinese company was signed according to a bilateral agreement signed between Nepal and China during Prime Minister Khadga Prasad Oli’s state visit to China. The IBN, on behalf of Nepal government, had approved the foreign direct investment of Rs 15 billion for the establishment of the company.

The company has 80% investment from the Chinese and 20% from the Nepali investors. It had set a target to complete the construction work of the factory within nine months. The factory is expected to produce 60,000 sacks of cement daily.

DHADING, May 20: The family members of a child, who died after falling into a pit dug up by a... Read More...