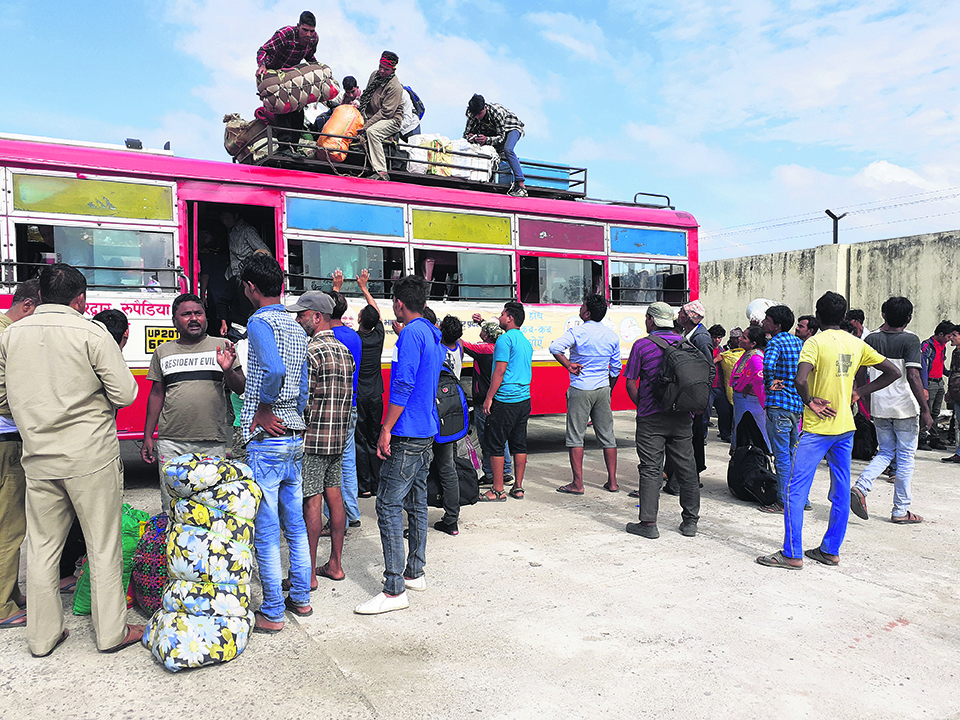 Nepalis returning home from India at the Nepalgunj bus stop in this recent picture.

NEPALGUNJ, Sept 29: Bakhat Bahadur BK and his wife, spotted near the Indo-Nepal border in Nepalgunj on Saturday afternoon, were all smiles. The couple was coming home from Himachal Pradesh of India for celebrating Dashain with their family members at home. “It feels so good to return home. We planned the return for many months. Now that we are on our way, we are really feeling great,” said Bakhat, a local of Chanute village of Surkhet.

In the past years, Bakhat used to work alone in India. Three months ago, he took his wife also along with him. Because they have been working at the new place for just three months, the couple was bit nervous about getting leave. “We were not sure whether we would be able to return home this Dashain. But they approved the leave and here we are on our way home,” said Bakhat.

Kamal Yogi of Tulasipur of Dang was no less excited. He was also seen with his family members when we spotted him at the same border. “We cannot celebrate Dashain in other’s place. So, coming home to celebrate with our own people is just exciting,” he said.

Yogi and his wife went to Hariyana of India 16 months ago. Last year the family was not able to make it for Dashain. “Then we were quite new in the new place. Asking for leave was problematic,” Yogi said. “But we were quite determined to make it happen this time.”

The couple said that they did not face any hassle on the way to home. But what happened at the border was something he did not like. “They were pulling each and every passenger to their rickshaws. Some of them even tried to drag us to their auto rickshaws. But the police did not intervene,” he complained.

Border areas remains quite crowded during Dashain and Tihar and mobility of goods and people gets very high.

According to Sub Inspector Madhav Prasad Rijal of Area Police Office Jamunaha, around 1000 Nepali workers are returning home every day these days from India. Next week, he expects this number to grow further.

“Dashain is nearly here and with that more Nepalis will return home from India. Nowadays around 1000 of them are returning home in a day, the numbers will grow in the next few days,” he said.
Special security arrangements have been made at the bus station. For safety and security of passengers, additional police personals have been deployed at border areas.

“We have been trying our best to provide them secure environment. There is presence of police at every sensitive border point,” Sub Inspector Rijal said.

Despite the claim, passengers don’t seem satisfied with police service. They say they are irritated because of the rickshaw and cart pullers. Some take away bags from passengers and even steal and runaway.

“Sometimes they behave so weirdly. We face this kind of hassle every time at the border,” stated Yogi. “Sometimes they rob you off your luggage as well,” he added.

According to Yogi, Nepalis face more problems on the Indian side than in Nepal. Police and officials try to draw money from poor workers, he noted.

“Sometimes you might get lucky but most of the time it’s a hellish experience on the India side of the border,” he said.

Rijal meanwhile stated rickshaw and bus drivers charging extra fare are being booked by police. For instance, from Rupaidiya to custom office, the rate is just Rs 20. But considering Dashain rush, passengers are forced to pay Rs 50.

“Some are found doing that and if caught we fine them. They try to earn money illegally, and we are trying to control it,” said Rijal. “Similarly, if rickshaw owners are seen forcing passengers to come with them, we take action. We are trying to make the environment more welcoming to the people,” he added.

Even small hoteliers trouble the passengers during the time of Dashain. According to returnee workers, they charge higher rates for tea and other edibles on the way.

“For everyone this seems to be a time to make money. The government must put such people behind the bar,” Yogi remarked, adding that all border points should be carefully monitored by the security forces.

Kalapani, Lipulek and Limpiyadhura are integral parts of Nepal: Govt
15 hours ago