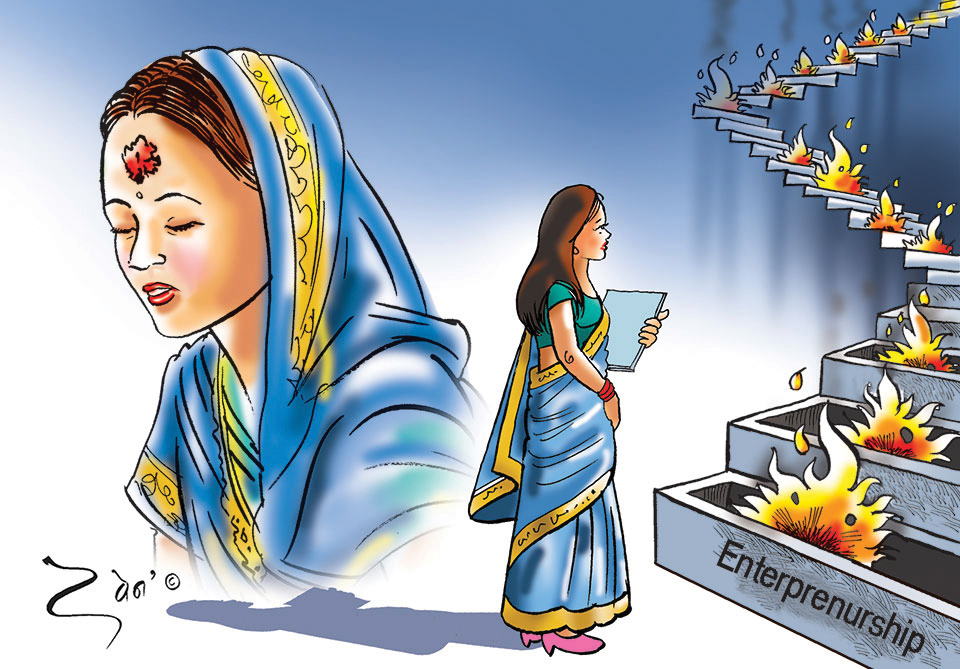 By ignoring special needs of female entrepreneurs, we are missing an opportunity to modernize the country.  Female workers are in a position to contribute to the country’s growth

Should policy making be more nuanced to accommodate the need of evolving demographic trend in Nepal? If phrased like this, the answer is likely to be an almost unanimous ‘yes.’ And yet, policy making tends to be rigid and changing a policy takes ages. Take for example, policies regarding women entrepreneurs. In a survey of managers and owners of 622 Nepali firms conducted by the International Labor Organization (ILO) two years ago, women entrepreneurs identified access to finance and difficulty of getting customers as two top barriers to growth. These barriers are confirmed by many entrepreneurs in subsequent private conversations. And yet neither banking sector’s lending policies nor any other enterprises’ promotion policies address these two barriers as of yet.

Female entrepreneurs matter for many reasons. First, Nepal’s demography is changing in many ways. Women, as Nepal Labor Force Survey (2017) conducted by the Central Bureau of Statistics (CBS) indicated, are leaving villages in record number and concentrating in cities. The findings of the survey showed that 4.4 million women moved from rural Nepal to urban Nepal, where as only 64,000 women moved from urban to rural areas. Women are in cities, but they are not necessarily doing jobs. Labor force participation rate (LFPR) for women now stands at lowly 26.3 percent, comparable to South Asian average of 26.5 percent. According to Nepal Economic Census (2018) conducted by the CBS, only 30 percent of a total of 900 thousand establishments in Nepal are managed by women whereas about 16 percent of these establishments are exclusively owned by women. Many women living in cities run mom and pop shops supported with the remittance of their migrant husbands.

Domestic policies such as Industrial Policy (1993), Industrial Enterprises Act (1993), Amended Industrial Policy (2011), Trade Policy (1983), and revised Trade Policy (2015) are some of our recent policies affecting entrepreneurship development. They are all generally gender neutral. These policies fail to recognize the demographic changes happening within the country and also fail to recognize the special need of female entrepreneurs.

Costs of failure
There are three main consequences of such failures. First, they perpetuate the difference between male and female in a society where many parents now care about the welfare of their female offspring than ever before due partly to decreasing rate of fertility. Nepal’s average household size has decreased, from 5.5 in 1996 to 4.2 in 2016, according to the Demographic and Health Survey of Ministry of Health. Gender neutral policies may have been acceptable in the past, but now more parents than ever resent such cavalier attitude of the government.

Second, they may not achieve the desired results of realizing overall industrial growth. Take, for example, the case of handicraft industry. It has consistently been one of the major export items of Nepal, accounting for somewhere between 0.5 percent and one percent of total GDP in the 1990s. It still accounts for more than five percent of total exports. An old survey indicated that 40 percent of total women entrepreneurs in Kathmandu Valley were in handicraft industry. And yet, the leadership of handicraft industry rarely has women representation. Consequently, women-led handicraft industries have not been able to graduate from Micro, Small, or Medium Enterprises (MSME) to large industries. We can partially blame the lack of influence of women entrepreneurs in domestic policy making for this. When Trade Policy (1983) was designed, women were not even consulted. Even the Trade Policy (2015) only cursorily mentions women entrepreneurs. The related Industrial Policy (1993), Industrial Enterprises Act (1993) and amended Industrial Policy (2011) fare no better. These policies were important in creating business-friendly environment in Nepal but they were primarily motivated by an integrated goal (increasing production) rather than disaggregated goals (increasing production while ensuring that different subpopulation groups were benefitting from these policies equitably).  Women entrepreneurs, who needed support, suffered from this short-sightedness.

Third, by ignoring the special needs of female entrepreneurs, we are missing an opportunity to modernize the country.  Female workers are here, ready, and in a position to contribute to the country’s growth. Fifty four percent of all workers in Human Health and Social Work Activities are female, according to the latest labor force survey. Fifty two percent of the total applicants to government jobs in fiscal year 2017/18 were female, according to the statistics provided by the Public Service Commission. Female workers were traditionally working informally, performing household chores or agricultural works, and now this all can change. And this can only benefit overall economy. Nepal’s female labor force participation rate is low at 26.3 percent, according to NLFS(2017), and a study by the Asian Development Bank in 2015 on women in the workforce showed that an average Asian economy can increase its per capita income by 30 percent in one generation and 70 percent in two generations if they close gender gap.

Ways to change
There are two major ways in which this situation can be improved in Nepal. One, by initiating credible and effective domestic policies. Our policies must address major barriers facing women entrepreneurs. Women entrepreneurs association such as FWEAN should be encouraged and invited while drafting trade policies even if these associations may not cumulatively account for much of the nation’s productions. Furthermore, the interface of entrepreneurs and government should be friendly to women entrepreneurs. Offices where they go to register companies and pay tax should have sufficient women representation. According to Public Service Commission (PSC), 23 percent of all government positions are now held by female workers and this is expected to reach 35 percent in the near future. Now it is time to delegate many of these workers to places where they interface with ordinary people.

Trade and industrial policies should also be oriented to address the need of female entrepreneurs. Nepal’s most recent trade policy (2015) has called for a program to be launched to promote industries run by women and other marginalized communities and link them to the export. This is a progress over the previous Trade Policy (1983) which was silent on inclusion issue. Earlier, in 1995, Women Entrepreneur Development Unit was set up inside Cottage and Small Industries Development Board (CSIDB) after 34 years of its existence. The mention of women entrepreneurs in the recent Trade Policy and the setting up women unit within CSIDB are small, nevertheless important, steps. But more significant initiatives are now needed.

Gender-sensitive policies are also due in other important fields where women already have some presence. For example, a recent report on leveraging trade for women’s economic empowerment by the ADB indicates that supporting women entrepreneurs in tourism, agricultural trade and rural development should help, and so should a well thought out plan for the integrated support for MSMEs. Gender-sensitive policy making is not new in Nepal: gender-responsive budgeting (GRB) was mulled after Beijing Consensus (1995), and started in practice in 2012 by the Ministry of Finance. Such practice should now be extended to entrepreneurship development.

Two, by extracting concessions for female entrepreneurs exporting goods abroad. Bilateral trades must now be oriented toward helping female entrepreneurs. It is easy to provide grants and conduct workshops, something many international donor agencies like to do in Nepal. But what female entrepreneurs need is the level playing field at every stage of the lifecycle of an enterprise. When exporting goods, female entrepreneurs have to go through different tasks which are carried out in male-dominated environment. Finding customers, understanding logistic of shipping goods flawlessly, spotting rising opportunities abroad and grabbing them quickly, and managing foreign currency reserves wisely are among the few tasks in international trade where male entrepreneurs have advantage over female entrepreneurs.  Nepal’s NTIS (2010 and 2016), designed as export promotion policies, both seemed to have failed to distinguish women entrepreneurs from their male counterparts. How about other countries stepping in and providing some help here? Offering language classes, making it easier for entrepreneurs to take part in trade fairs, and helping them understand the preferences of local communities are some of the aspects where Indian, Chinese, the US, EU, Korean and Japanese bilateral help in Nepal could be partly diverted. Alternatively, Nepali government can ask for these concessions in its future trade negotiations with these countries.

KATHMANDU, July 6: Lack of dissemination of proper information along with a number of hindrances including poor market access, poor financial... Read More...

KATHMANDU, June 12: Though majority of women prefer to have paid work, contrary to this, the situation is disappointing as... Read More...

Nepse inches up 4.97 points, while daily turnover amount dips to Rs 1.76 billion on Wednesday
23 minutes ago