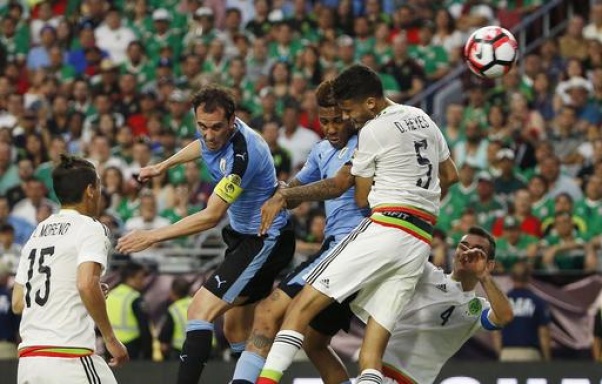 Marquez's close-range shot in the 84th minute broke a 1-1 tie and Herrera's header from just outside the net added another score in extra time.

Mexico's other score was an own-goal by Uruguay's Alvaro Pereira four minutes into the match. Marquez's score came 10 minutes after Diego Godin's header tied it for Uruguay at 1-1.

A vastly pro-Mexico crowd of 60,025 watched the matchup of what are considered the top teams in the tournament's Group C.

The evening began on an odd note when the wrong national anthem was played for Uruguay in the pre-match ceremonies. Copa America 2016 said in a statement that the playing of the Chile anthem instead was "a human error."

The Mexican team, considered a serious challenger to win its first Copa America title, extended its unbeaten streak to 20 games.

Uruguay was without its best player, Luis Suarez, who injured a hamstring in a match two weeks ago.

Marquez's go-ahead goal came after a pass slipped through his legs and to a teammate, who sent the ball back to him for a wide-open shot at the net as the wild, enthusiastic crowd erupted.

Uruguay's Matius Vecino and Mexico's Andres Guardado drew red cards and will have to sit out a match.

Uruguay was down to 10 players after Vecino left just before halftime after kicking Mexico's Jesus Manuel Corona in the knee.

But despite being at a man disadvantage, Uruguay went on the attack earlier in the second half and, after several near misses, tied it at 1-1.

Guardado drew a red card to set up a free kick for Uruguay. Carlos Sanchez sent the ball into the goal box where, in the match's 74th minute, Godin went up in a crowd and headed it into the right corner of the net. It was the first goal Mexico had allowed in its last 252 minutes of play.

The celebrating Uruguayan players were briefly pelted by water bottles from the crowd.

Early on, the own goal came after a near-perfect center pass from just inside the right sideline by Guardado. Pereira and Herrera both went up for it. Herrera missed but Pereira, trying to head the ball over the net, instead knocked it to the left of goalkeeper Fernando Muslera and Mexico led 1-0.

In the pre-match ceremony foul-up, Uruguay's players stood silently, many of them with blank stares, as the wrong anthem was played.

"We sincerely apologize to the Uruguayan Federation, the Uruguay National Team, to the people of Uruguay and to the fans for this mistake," Copa America 2016 said in its statement. "We will work with all parties involved to ensure such an error does not occur again."

Jose Mourinho was finally given something to smile about as a tempestuous trip to the United States ended with a... Read More...

BURNLEY, Oct 2: Arsenal scored with virtually the last touch of the game to beat Burnley 1-0 and extend its... Read More...