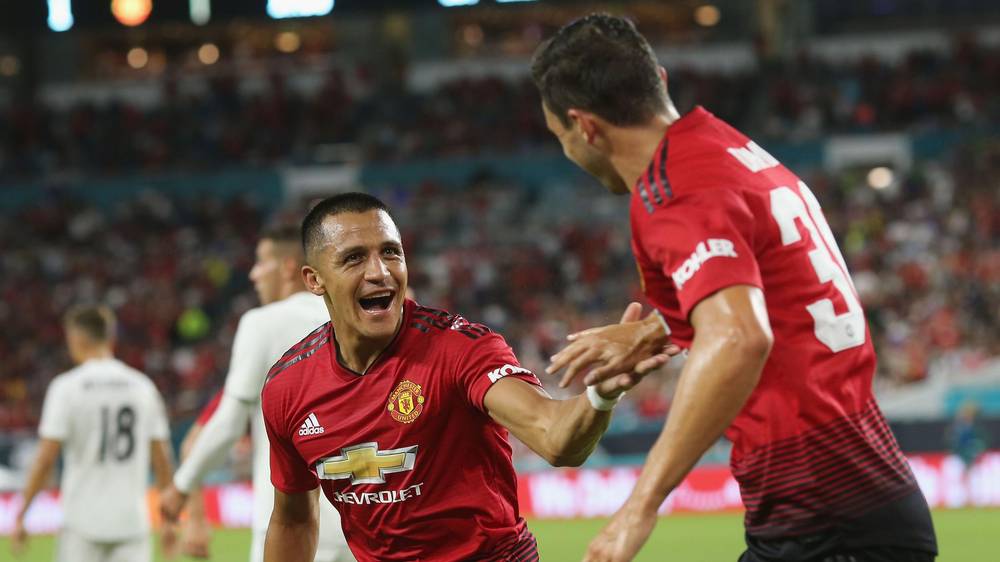 Jose Mourinho was finally given something to smile about as a tempestuous trip to the United States ended with a 2-1 victory over former club Real Madrid thanks to first-half strikes from Alexis Sanchez and Ander Herrera.

Mourinho has cut a miserable figure during their two week trip to the United States, lashing out at a lack of transfer activity while reserving stinging criticism for a number of first team players. But seeing his side establish a two goal lead in the first half was encouraging, as was holding Real at bay after Karim Benezema's goal just before the interval gave the Spanish side hope of mounting a comeback.

An extraordinary outburst last weekend after losing to Liverpool in Michigan has seen question marks about squad morale surface once again.

The Portuguese has been without 12 key players for most of the tour with many enjoying an extended break following the World Cup.

In front of 64,141 at Miami's Hard Rock Stadium, United were finishing off their pre-season preparations against a Real Madrid side just starting theirs.

La Liga starts a week later than the Premier League so new Real manager Julen Lopetegui was able to name the likes of Gareth Bale to start while Germany star Toni Kroos was on the bench.

Spanish international David de Gea was making his first start since returning from the extra time given to him following the World Cup and he was almost beaten in the eighth minute - Bale starting a move which saw Benzema fire just wide from close range.

Brazilian Fred, who was signed earlier this summer for £52 million, was making his first United start and looked comfortable in his new surroundings.

And on 18 minutes, United were ahead. Ander Herrera fed Matteo Darmian and teed up Sanchez who clinically swept the ball home.

It was a Mourinho's side's first real opportunity - and it was taken superbly.

So too was the second goal which arrived on 27 minutes.

Darmian lifted the ball to Mata and once the Spaniard had regained his composure he crossed for Sanchez who was able to divert the ball into the path of Herrera who made no mistake.

Bale curled wide soon after but just before the interval, Benzema tapped in an excellent Theo Hernandez cross to give the vast amounts of Madrid fans in Miami something to cheer.

Bale, a one time target for Mourinho, was withdrawn for the second half as Lopetegui shuffled his pack and one of the substitutes, Martin Odegaard should have levelled on 56 minutes when he blazed over the bar from eight yards.

The Norwegian saw a free-kick saved by De Gea late on but United held firm to lift Mourinho's mood.

It was their first victory in regulation play this pre-season - AC Milan were defeated on penalties in Los Angeles last week.

I will build a heritage road connecting Swayambhu and Hanuman Dhoka: Tourism Minister Shrestha
17 hours ago

NAC to revise its 10-year business plan
19 hours ago

46 dead, 16 hospitalized after trailer of migrants found
1 hour ago
Stockbrokers permitted to operate their own TMS for online trading of shares
3 hours ago

I will build a heritage road connecting Swayambhu and Hanuman Dhoka: Tourism Minister Shrestha
17 hours ago