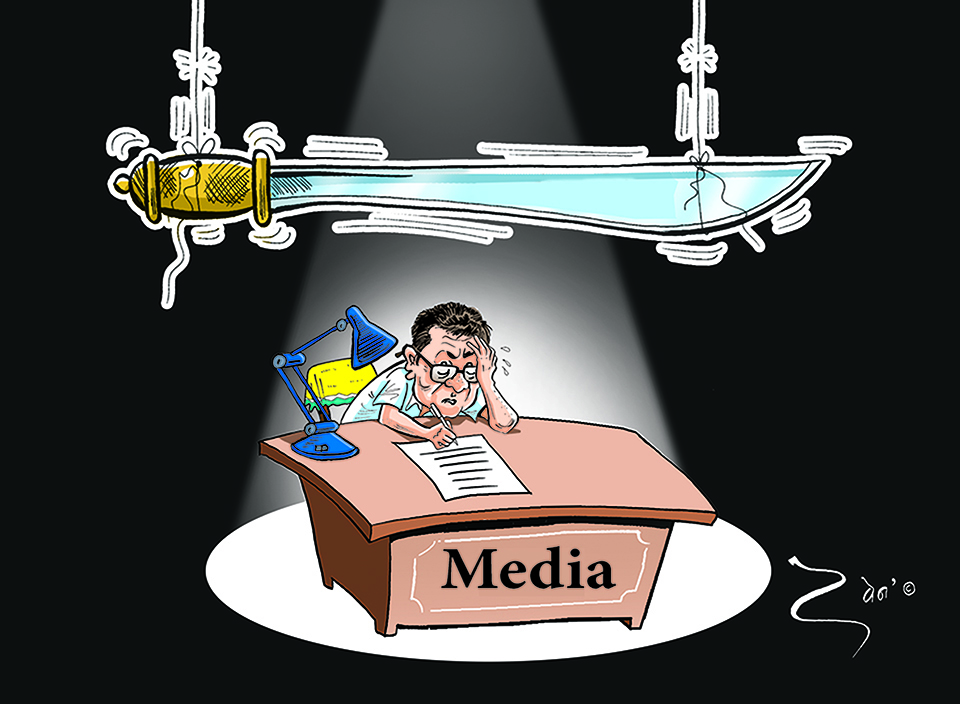 In a modern democracy, citizens feel empowered when they have adequate access to truthful information without which they cannot take wise decisions

Despite a number of epochal struggles for democracy, Nepalis still find democracy a vague idea as to how to utilize it the best way possible. Since democracy is a process rather than a readymade tool to consume, vagueness, to whatever extent, is natural. But making efforts to minimize vagueness by exercising the legally explicit rights in a morally responsible manner is an indispensable task at hand. Morally responsible behavior in democracy is an issue of moral and mental cultivation that develops wisdom. This seems to be a long-term homework not to be taken for granted at all. Above all, democracy, if it is not considered a mere archived text, is a matter of culture to be nurtured from early childhood by parents and teachers.

At the era preeminently characterized by information and communication technologies (ICTs) overcoming geographical barriers, gone are the days when we used to teach people that their democracy was just to queue up and to vote for their leaders, who, in turn, would bless them with prosperity and happiness.

Choice is not a bad idea. But the right choice requires the chooser’s critical and analytical capacity in today’s democratic elections, most of which — to be explicit in global terms — frustrate ordinary masses such as those in Nepal. Peoples’ frustrations ventilated on a global scale can be attributed to many unidentified variables, definitely including rulers’ power-mongering addictions that severely affect the application of merits of democracy. Amidst information blizzards, making the right choices is a mind-boggling exercise. We yet have to convince ourselves that far more remains to be done after elections are accomplished. Perhaps a more rational thing would be to believe that democracy is the good that happens to people after elections, though the intention here is not to undermine people’s legally guaranteed right to choose their representatives.

Equality, freedom and brotherhood have been prescribed as the vital elements for humankind to internalize and exercise for sustaining humanity and co-existential progress in the UN Charter. Democratic constitutions all over the world contain these elements. So does Nepal’s. The exercise to translate the maximum of these equality, freedom and brotherhood elements into daily public life is democracy. Our constitution reiterates this idea.

Enabling citizens to construct a better image of democracy could be a good function of media, while regularly feeding political decision-makers with rich and truthful information is a predominantly vital process toward which press freedom should be directed. For, democracy and press freedom are inter-derivative systems. They thrive due to each other.

Nobody has asked for absolute and indefinite press freedom in Nepal. The nation’s laws punish individual journalists who misuse their Fourth Estately power of accessing, processing and disseminating information to people.

Nepali media have become concerned about the government’s attempt to assume a judicial responsibility by setting up a mechanism under its own control—a proposed approach that runs counter to democracy and press freedom enshrined in our constitution. The umbrella organization of Nepali journalist Federation of Nepali Journalists (FNJ) has strongly opposed the bill. Some top leaders are reported to have assured the FNJ of amending the bill substantially but the government has not said this as yet.

Press freedom can be utilized for the greatest good of people only in a democratic atmosphere. The more mindful and ethical journalists become in their journalistic work, the better utilization of press freedom occurs. However, journalists, media institutions, civil society organizations and citizens definitely need to secure an environment in which neither journalists nor information sources could be suppressed or penalized for the authentic disclosure of possible blockbuster scandals in which the country’s bigwigs may be involved.

Imprisoned journalism—imposed and parroted—can not serve the society and multiple stakeholders in an independent way. In a modern democracy, citizens feel empowered when they have adequate access to truthful information without which they cannot make wise decisions. When journalism itself is viable to keep on functioning democratically, it can ensure media viability. Citizens survive and revive through communication on which they thrive. Journalistic communication is to be geared consciously toward this goal. This is one way to pave the way for media viability. Maintaining political, social and opinion diversity in media coverage is another way to ensure media viability.

Understanding the issue of media viability in a broadly human-centric way is vital for the genuine democratization of society and the development of journalism as a public good. Stakeholders, especially journalists and media entrepreneurs, need to develop a right view of journalism and media entrepreneurship—the two closely interrelated elements with distinctive meanings. Media entrepreneurship involves financial investment and risk management but journalism is a public service as it handles the public responsibility of informing people on current issues and events of public significance. The principled position of journalism on a global scale is that journalism is an independent monitor of power and what goes on in human society. As an independent observer, journalism is always expected to represent people through information gathering, processing and dissemination on a regular basis, which is why it is called the fourth estate, which is instrumental to monitoring power and reporting to citizens so that they could be informed enough to build necessary pressures whenever and wherever needed.

We have a growing number of media outlets, with awfully less diversity and information-richness in coverage. Media outlets across the country can bridge the Himalayas, the Hills and the Plains and contribute to national unity.

We are far removed from formulating the most needed media strategy to make the federal democratic republic work smoothly in the scenario of the latest information and communication technologies (ICTs). Research-minded policy formulation regarding media and communication in the wake of federal republican press freedom is to be sought. Even the FNJ, as one of the concerned stakeholders in this matter, should not be oblivious of this need.