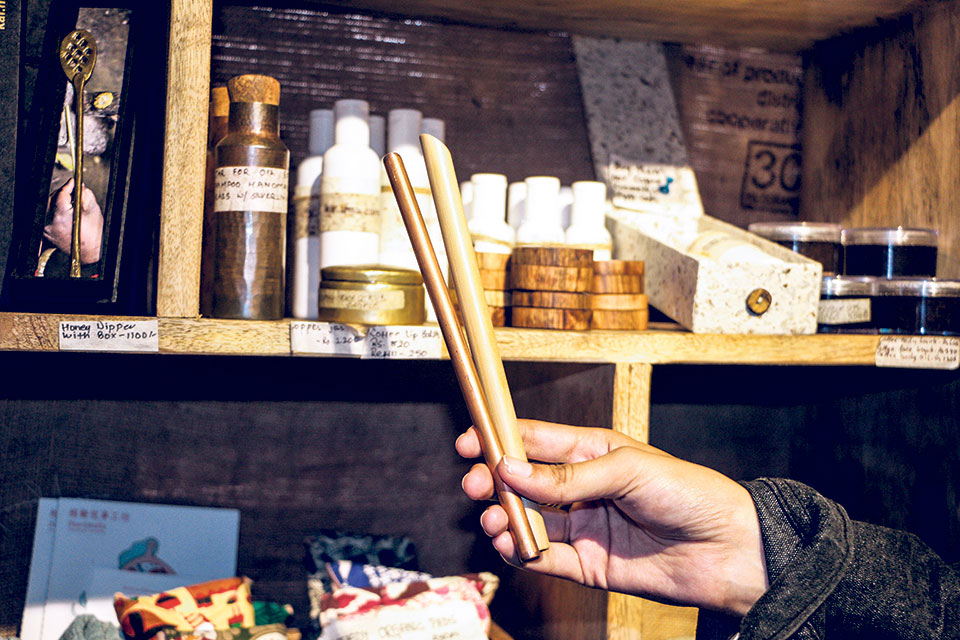 Neetya Karki carries a heavy bag. Besides the essentials, like her wallet, umbrella, sunglasses, and a book, in her dark green tote, the 29-year-old carries a steel tumbler, a double decker steel lunchbox, a fork and a spoon, two cloth napkins, a canvas bag, and, her recent purchase, a bamboo straw. Her bag might weigh a lot but she’s treading lightly on the planet by reducing plastic usage as much as possible, she says.

It’s been a year that Karki has been trying to cut down on single-use plastic. She started with not buying bottled water and one thing led to another. Initially, her friends mocked her for carrying a “tiffin” box but soon enough they too had one in their bags. The awareness that single-use plastic was harmful not only for the planet but for one’s own health too, as plastic leaches into water and food, had many make the switch from cling food wraps or zip lock bags to metal and glass containers.

“I do end up carrying a lot of stuff on a daily basis. Sometimes I have to carry two bags. But the realization that I’m actively contributing towards saving the planet keeps me motivated,” says Karki adding that there have been times when she’s forgotten to grab her steel tumbler and gone an entire day without water but she has not bought a single bottled water for more than eight months now.

Like Karki, Anisha Sharma, a 19-year-old first-year student at UTA, also carries a reusable water bottle so that she doesn’t have to buy a disposable plastic one. She also has a cloth bag with her at all times. That way she can say no to plastic bags while buying fruits and snacks. “It might not seem like much but I feel good when I play my part in reducing the use of plastic that is such a major environment pollutant,” she says.

Single-use plastics like disposable cutlery, water bottles, coffee cup lids, and plastic straws are used for mere minutes but they don’t decompose and remain on the earth for several hundred years. Karki mentions seeing on Instagram a photo of a Mars chocolate wrapper that looked like someone had just tossed it a day before but the date stamped on it showed it was older than her.

According to Plasticoceans.org, 50% of plastic produced is single-use. According to the Ocean Conservancy, plastic has been found in more than 60 percent of all seabirds and 100 percent of sea turtle species. Getting rid of plastic by burning them produces toxic fumes and so we have found no way to get rid of all the plastic that has been polluting the land and the water for the past few decades.

Sujana Basnet, who lives in Kathmandu, says that it’s the younger generation of Nepalis that seems to be more concerned about protecting the planet. Most Nepalis, she believes, are simply not aware about the detrimental effects of plastic pollution. A simple case in point could be the number of bottled water sold in a day in Kathmandu. This scribe questioned vendors at five random shops and they said they sold at least five bottles on average, with the number going up to 10 on a hot summer day.

To combat plastic pollution, Kar.ma Coffee in Jhamsikhel, Lalitpur, recently introduced copper and bamboo straws that can be used over and over again. According to Birgit Gyawali, owner of the coffee shop, there was a time when Kar.ma Coffee used plastic straws. However, they always wanted an alternative for this considering how straws are one of the biggest single-use polluters in the world.

“We had two options – either stop using straws completely or come up with a reusable, long-lasting alternative,” she says. This is when one of her friends recommended using copper to make straws. “So we did that. Metal straws are a simple and effective way to cut down your dependence on one form of single-use plastic,” she says. Kar.ma Coffee also sells bamboo straws that are imported from Taiwan.

At first, Gyawali says, it was difficult for their customers to get used to the fact that Kar.ma Coffee was not giving out plastic straws and that they would have to buy bamboo or a copper one if they needed a straw for their drinks. “But, eventually, people understood why we were doing what we were doing. Plastic pollution was a big issue and most people only needed a reminder that we could play our part to minimize it,” she says. She says that she does see a slight shift in people’s mindsets when it comes to single-use plastic but there is still a lot of ground to cover.

Hriwatch Rai, staff at the online food delivery service 911 Food Express, says there is a need for mass awareness about cutting down single-use plastics. He mentions that, as an online food delivery service, they realize they are using a lot of plastic cutlery on a daily basis but they are yet to find an alternative to this problem. Rai says that no one has ever asked them to leave out the plastic spoons and forks when ordering food. “Even when people are ordering food to have at home, it never occurs to them to ask the restaurant to skip the plastic cutlery,” he says.

Similarly, at Dalle Restaurant, though they don’t use plastic while serving food at the eatery, their hands are tied when it comes to delivering food. Sima Tamang, staff at the restaurant, says that though they use paper and aluminum foil boxes to pack food, they have to use plastic spoons and forks. She believes customers could play their part in tackling this by specifically asking them not to include plastic cutlery in their takeaways.

Sheeja Upadhyay, a student living in Kathmandu, is committed to playing her part as an environmentally conscious teenager. She has switched from sanitary pads to menstrual cups and swapped bottled face washes for soap. She also uses bamboo toothbrushes. This way, she says, she has tried her best to reduce the use of plastic as much as possible.

“If I have to use plastic for something, I make sure I use it over and over again. I use plastic boxes to plant herbs and succulents in my small garden but these are items that will probably not need to be replaced for years,” she explains adding that each one of us has to consciously work on our habit and not opt for single-use plastic when you have other environment-friendly alternatives.

“Be it by carrying your own bag while going to the grocery store or not using plastic spoons and forks in takeaways, it’s the small things that can create an impact in the long run,” she says.

However, all the people this scribe spoke to seemed to agree that the key was to start now. They also seemed to think that thanks to school curriculums teaching about the harms of plastics as well as the art of reusing and recycling becoming popular by the day, the idea of decreasing plastic pollution is slowly but surely getting ingrained in people’s minds.

“It might seem like it would make no difference if you didn’t buy a bottled water or didn’t get a plastic straw in your drinks. But collectively when there are lots of people doing it, that’s hundreds of tons of plastic stopped from being dumped into the ocean and from polluting the earth,” says Basnet. “And that’s a pretty good reason for every person to do what little s/he can,” concludes Karki whose getting-heavier-by-the-day bag says a lot about her commitment of ultimately leading a completely plastic-free life.

The 16-year-old changing the world

What were you doing when you were a teenager? ... Read More...

The plastic in our lives (PHOTO FEATURE)

On World Environment Day, here's some plastic facts that one should be aware about. ... Read More...

5,000 applications for driving license to be processed daily
48 minutes ago