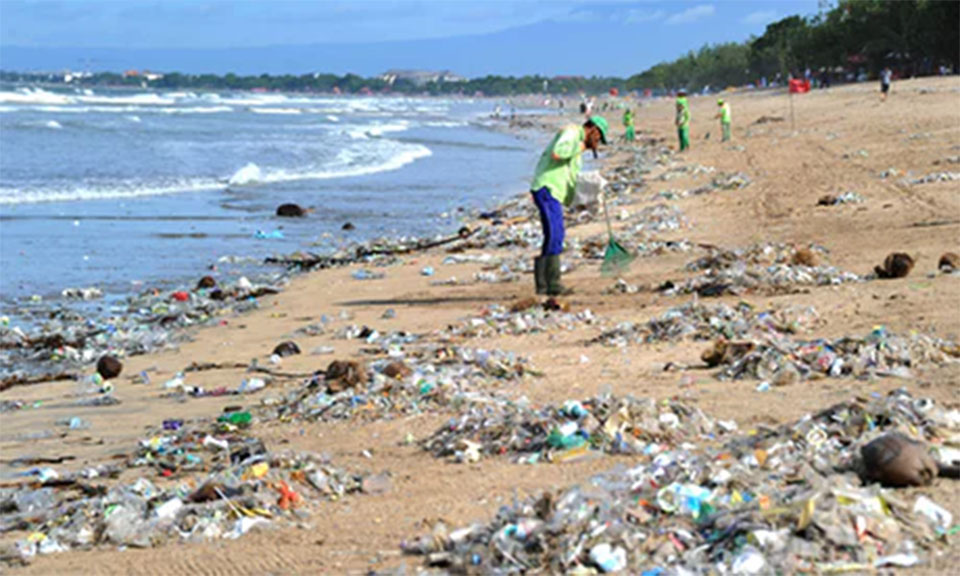 Video posted on YouTube shows water densely strewn with food wrappers, cups and sachets as tropical fish dart in and out

A British diver has captured shocking images of himself swimming through a sea of plastic rubbish off the coast of the Indonesian tourist resort of Bali.

A short video posted by diver Rich Horner on his social media account and on YouTube shows the water densely strewn with plastic waste and yellowing food wrappers, the occasional tropical fish darting through the deluge.

The footage was shot at a dive site called Manta Point, a cleaning station for the large rays on the island of Nusa Penida, about 20km from the popular Indonesian holiday island of Bali.

In a Facebook post on 3 March Horner writes how the ocean currents had carried in a “lovely gift” of jellyfish and plankton, and also mounds and mounds of plastic.

The video shows Horner swimming through the mess for several minutes and also how the waste coagulated on the surface, mixing in with some organic matter to form a slick of floating rubbish.

Manta Point is regularly frequented by numerous manta rays that visit the site to get cleaned of parasites by smaller fish, but the video shows just one lone manta in the background.

“Surprise, surprise, there weren’t many mantas there at the cleaning station today...” notes Horner, “They mostly decided not to bother.”

Rubbish has been inundating Bali for several months now, washing over mainly from the neighbouring island of Java during the annual rainy, or “trash” season.

Indonesia produces about 130,000 tons of plastic and solid waste every day, with about half of that reaching landfill sites, according to the Bali-based, Rivers, Oceans, Lakes and Ecology (ROLE) Foundation.

The rest is either illegally burned or dumped in Indonesia’s rivers and oceans.

With poor government planning and low levels of awareness about waste and recycling, Indonesia is now the second-largest plastic polluter in the world after China.

Several weeks ago thousands across Bali took part in a mass clean up, in attempt to rid the island’s beaches, rivers and jungles of waste, and raise awareness about the harmful impacts of trash.

Rich Horner said that while divers regularly see “a few clouds of plastic” in the rainy season, the slick he identified is the worst yet.

Divers returned to the site the next day, he reports, by which time the slick had already moved on, “continuing on its journey, off into the Indian Ocean”.

Neetya Karki carries a heavy bag. Besides the essentials, like her wallet, umbrella, sunglasses, and a book, in her dark... Read More...

KATHMANDU, Jan 15: Burning waste materials, which is restricted by national and international laws, is a normal phenomena in Tribhuvan... Read More...