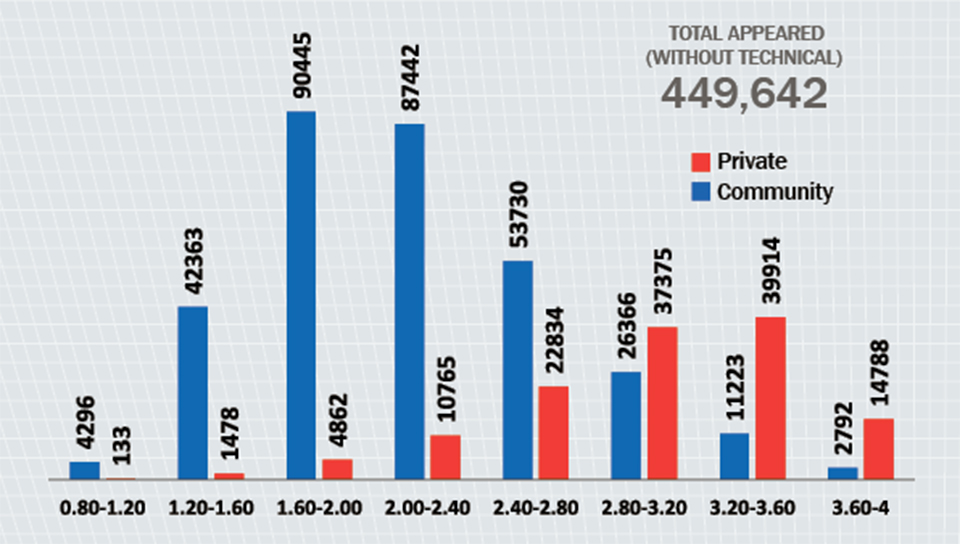 KATHMANDU, June 28: The performance of public schools continues to remain dismal despite decentralization in the education system, the Secondary Education Examination (SEE) results for 2075 show.

The local bodies have been managing public schools since 2017. Their involvement had raised hopes of improved scrutiny of teachers and enhancement in the quality of teaching.

Two years on, the results show public schools lagging far behind the private schools in terms of the grades scored by students.

Public schools account for only 15 percent of students securing GPA 3.60 to 4, or A+, while they make up a whopping 92 percent of those securing GPA 2.00 to 2.40, or C, or below. Grade A+ is considered extraordinary, while C+ is considered average. Grades below C are considered below average although these wouldn’t prevent students from pursuing higher education.

The results point to a widening gulf between public and private educations. Deteriorating quality in public school education has long been an issue.  But many had expected the situation to change after the local bodies were handed the responsibility for managing public schools.

“Some exceptions aside, the local bodies’ involvement in education hasn’t been satisfactory. We are yet to see them prioritize education,” said Rajendra Dahal, the editor of Shikshak a monthly magazine on education.

Experts, however, said it was too early to expect change in a system that has been dysfunctional due to years of negligence.

“Although the constitution has authorized the local bodies to manage local schools, they have not managed to do so,” said professor Vidyanath Koirala.

Similarly, around 41 percent of the 63,741 students scoring 2.80 to 3.20 were from public schools.
The results paint a grim picture of public school education across the country, particularly in Province 2, Karnali and Sudur Pacchim.

The data also shows shocking gaps in the quality of education among the seven provinces.

Province 3 has outperformed all other provinces in term of exam results. Over 57 percent of students scoring GPA 3.60 to 4 are from Kathmandu. Karnali Province, on the other hand, accounted for only 0.83 percent of those scoring the highest grade.

Dahal, the magazine editor, said the provincial government’s apathy toward education was showing in the results.

“The provinces have been pouring all its energy and resources into building roads,” said Dahal. Education quality will change only if the government works to ensure textbooks arrive on time, improve the curriculum and motivate the teachers.

Compared to last year, there has been a slight decrease in the number of students obtaining GPA from 0.85 to 1.20, the poorest grade.

SEE results have deteriorated this year

KATHMANDU, July 28: The results of the Secondary Education Examination (SEE) for the year 2022 have worsened. Due to the... Read More...

Counting of votes resumes in Udayapur-1, UML boycotts
5 minutes ago