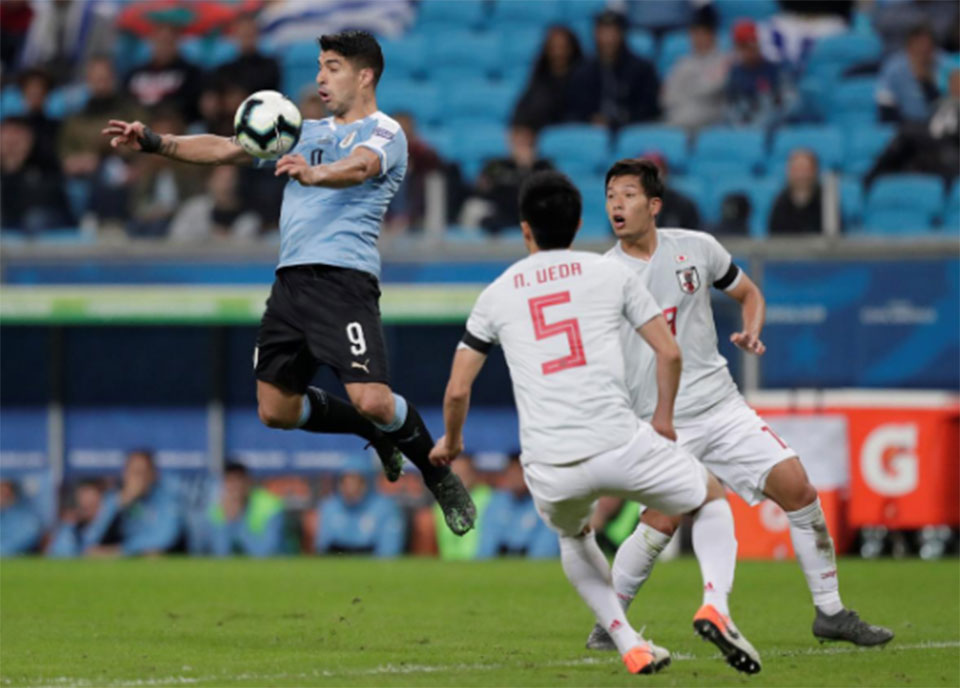 PORTO ALEGRE, June 21: Uruguay twice came from behind to draw 2-2 against a young Japan side in the Copa America with the help of two questionable refereeing decisions and will have to wait until their final group game to book their place in the quarter-finals.

Tournament guests Japan went into the game after a 4-0 defeat to Chile while Uruguay had hammered Ecuador 4-0.

But despite some early close attempts from Uruguay, Japan began to impose themselves on the game and Koji Miyoshi gave them the lead in the 25th minute with a confident finish following a counterattack.

Japan defender Naomichi Ueda, who appeared to be kicked by Edinson Cavani in a dispute for the ball, was penalised to the bemusement of the Asian side.

Japan’s frustrations grew after the interval when they were denied a penalty when Uruguay defender Jose Gimenez appeared to foul Shoya Nakajima, although they restored their lead shortly after without the need for a spot kick.

Uruguay keeper Fernando Muslera came out to claim a cross but could palm it right into the path of Miyoshi, who pounced to put the ball into the unguarded net to score his second of the game.

The 15-time Copa America champions equalised again seven minutes later through Gimenez, who escaped his marker to head home from a corner.

Oscar Tabarez’s side went all out for a winning goal that would have sealed their place in the last eight but were repeatedly denied, with Suarez smashing a shot against the crossbar.

Suarez had come close to scoring in the second minute of the game with an audacious volley from near the halfway line which skimmed the roof of the net, while Cavani clanged the crossbar with a thumping shot in the first half.

“We played well in general but we learned that in tournaments of this quality if you make two errors you can concede two goals so we have to be more careful,” Suarez told reporters.

Uruguay lead Group C with four points, while Japan are third with one.

Second-placed Chile meet bottom side Ecuador on Friday before a showdown with Uruguay on Monday which is likely to decide who wins the group, with Japan facing Ecuador in their final game.

Japan have brought a mostly young squad to the Copa to prepare for next summer’s Olympic Games in Tokyo but Suarez said he and his team mates had not underestimated them.

“They are young and fast but we know they have a lot of quality. They pressed us well and they didn’t let us play the way we wanted.

“We knew what this game could be like, their result against Chile didn’t tell the full story.”

Japan coach Hajime Moriyasu said the result would serve his young side well in the future.

“This draw will help us grow because Uruguay is one of the top teams in international football,” he said.

“This point will help us develop and boost our confidence.”

This govt is comfortable for Nepal: PM Oli
23 hours ago