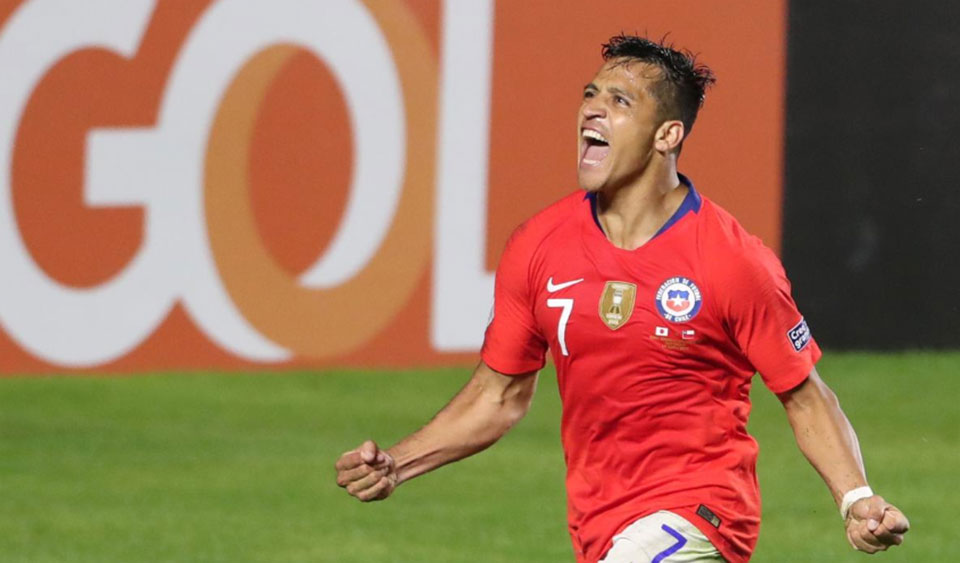 The 2015 and 2016 Copa champions took the lead late in the first half with a towering header from midfielder Erick Pulgar.

Journeyman striker Eduardo Vargas then continued his remarkable consistency for his country by scoring at a fourth consecutive major tournament and doubling Chile’s lead in the 54th minute with the help of a deflection.

Sanchez made it 3-0 with a diving header from close range in the 82nd minute, Chile’s all-time top scorer punching the air in delight after enduring a frustrating season with United compounded by a knee injury suffered in March.

A minute later Sanchez laid on a pass for Vargas to score again, a classy chip which saw him become Chile’s top scorer in the Copa America (12) and replace Marcelo Salas as the country’s second all-time leading scorer behind Sanchez.

Sanchez said he had come through one of the worst periods of his career recently.

“For six weeks I felt worse than I ever have before,” he told reporters. “I struggled in the first half as I felt stifled but in the second half I was more relaxed and played with more freedom and excitement.”

The win put Chile joint top of Group C with Uruguay, who hammered Ecuador 4-0 on Sunday.

Japan, one of two guests in the South American championship alongside Qatar, were fielding a largely young and inexperienced side which suggests they are using the tournament as a testing ground for players ahead of next year’s Olympic Games in Tokyo.

Striker Ayase Ueda missed a great chance to equalise in the first half while new Real Madrid signing Takefusa Kubo missed the target late in the game when the goal was gaping.

Chile are considered outsiders to win the tournament after a downturn in form and results which led to them failing to qualify for the 2018 World Cup.

But Sanchez said they were now on the right track.

“I think we have improved as a team since 2015 in defending and getting on the attack quickly,” he added.

“We’ve won a very difficult game and now we have to think about our next one.”

CHILE, June 13: Chile forward Alexis Sanchez will miss the group stage of the Copa America due to a leg... Read More...