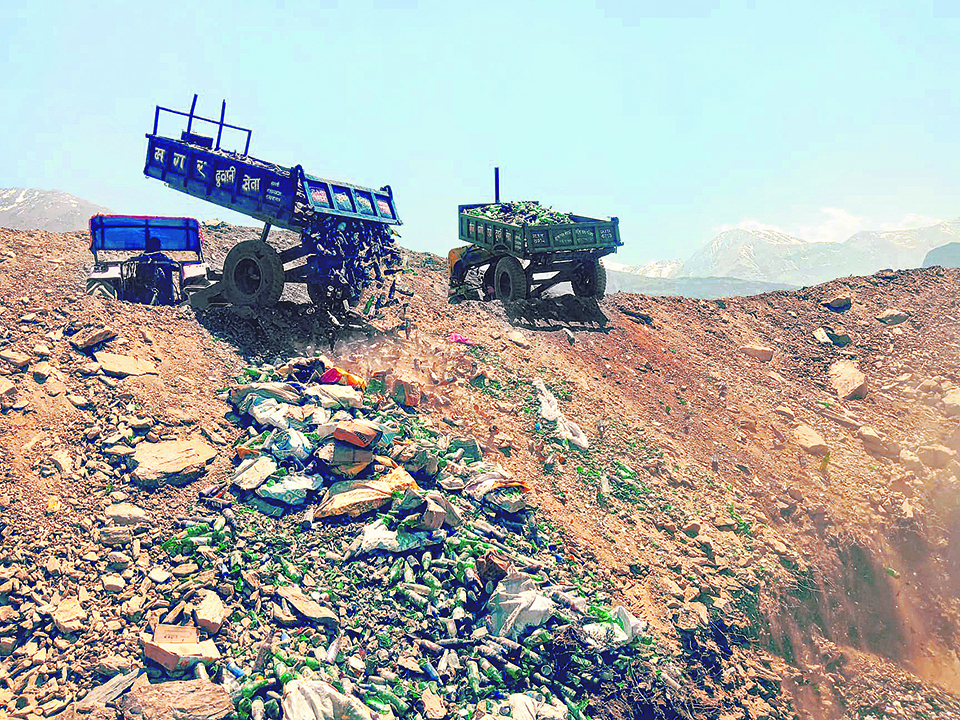 MUSTANG, May 12: Muktinath temple area, a prominent religious destination for Hindus and Buddhists, is being polluted with garbage dumped by pilgrims and visitors. Heaps of waste around the area is left uncollected.

As part of the Annapurna Range trekking route, this temple attracts thousands of tourists also every year. Locals point to the lack of a proper garbage management mechanism at this place and assert that the dozens of hotels and restaurants in the area that directly benefit from the tourist influx should also be proactive in keeping the area pristine.

“Muktinath temple is considered one of the most important religious sites for Hindus and Buddishts. And yet, we have not been able to treat it with due reverence. It is getting dirtier by each passing day,” said Suraj Gurung, a local from Muktinath temple area.

Gurung said that a few visitors would come to Muktinath until a decade ago because it was very tough to reach here. Over the years the density of visitors to the shrine increased manifold due to the ease in transportation to the area. Along with the increase in the number of tourists, hotels and restaurants in the area have also mushroomed.

“Even though the site attracts a lot of tourists every year and directly benefits the local economy, nobody has cared about managing the garbage that the visitors dump during their visit. Visitors, be it pilgrims or tourists drop food wrappers, water and beverage bottles and containers carelessly,” Gurung remarked.

Liquor bottles dumped haphazardly around the temple premises is one of the biggest nuisances for the locals. “Liquor is consumed by almost everyone here. Tourists take it even more. And nobody knows where to throw the bottles. They dump the bottles where they finish drinking it,” Gurung explained.

Liquors are sold off not just by the hotels and restaurants but also by stall operators. This has made the situation worse. Consumers, as they can get to buy liquors anywhere, do not bother to drink and dump the bottles responsibly.

“When it’s available wherever you want it, and you are free to throw off the bottle randomly, cleanliness of the area is out of the question,” Gurung observed. Along with the temple premises, human settlements near the temple have also been affected by the lack of waste management.

Locals banning the use of glass bottles

Considering the deteriorating environment around the temple area, locals are taking initiatives to clean it. They have launched a cleanliness drive which includes a ban on bottles made of glass. Stating that glass bottles are extremely hazardous, they have put a restriction on the use of such bottles.

Suraj Gurung, who is coordinating the campaign, stated that the local hotels and restaurants have supported the ban. “They are not allowed to sell glass bottles. And they have agreed to cooperate,” he said. “We are holding discussion with hoteliers and restaurant owners on the possible ways we can reduce other wastes in the area.”

Locals have permitted the hoteliers to sell liquor in glass bottles, but internally. As per the new regulation, hotels and restaurant owners can sell glass liquor bottles to their patrons but are responsible for their disposal. “If they have to sell liquor that comes in glass bottles to their guests, they can do so in their establishment. But they are responsible for managing the waste on their own. They cannot throw the bottles anywhere or place them in front of their establishment,” Gurung said.

Locals have banned the selling of glass beer bottles but have allowed the sale of beer cans. “Cans don’t break, so there is less mess. Managing broken bottles is extremely hazardous. It is tough to dispose of all the broken glass and makes it extremely hard to clean it,” he said. Similarly, selling of soft drinks is also not allowed in glass bottles. Locals have started selling soft drinks in plastic bottles and tin cans.

“We are also worried about plastics. We have to come up with a permanent solution for managing it. Presently we have only done what is instantly possible,” Gurung said.

Karma Chhiring, the chairperson of Ranipauwa Muktinath Area Management Committee, stated that the area would be declared plastic and glass free area soon. “It has become urgent to do so. We are working very hard to make it happen,” he said.

A growing number of locals are also considering the use of cotton bags instead of plastic bags. Once the ban on bottles takes its course and becomes successful, they are looking forward to banning plastic, Chhiring said.

“We have already held discussions with all the stakeholders. Hoteliers are ready for this. They profit even better when the area is clean, more tourists would come, and they would stay longer,” he said.
According to Chhiring, the local government, as well as NGOs, are also being approached for supporting their initiative. “Muktinath is not just ours; it is a national asset. We have to do everything it takes to keep this place clean,” he remarked.

NC leader Paudel, others released after three hours in police control
21 hours ago