Waste continues to pile up in Muktinath 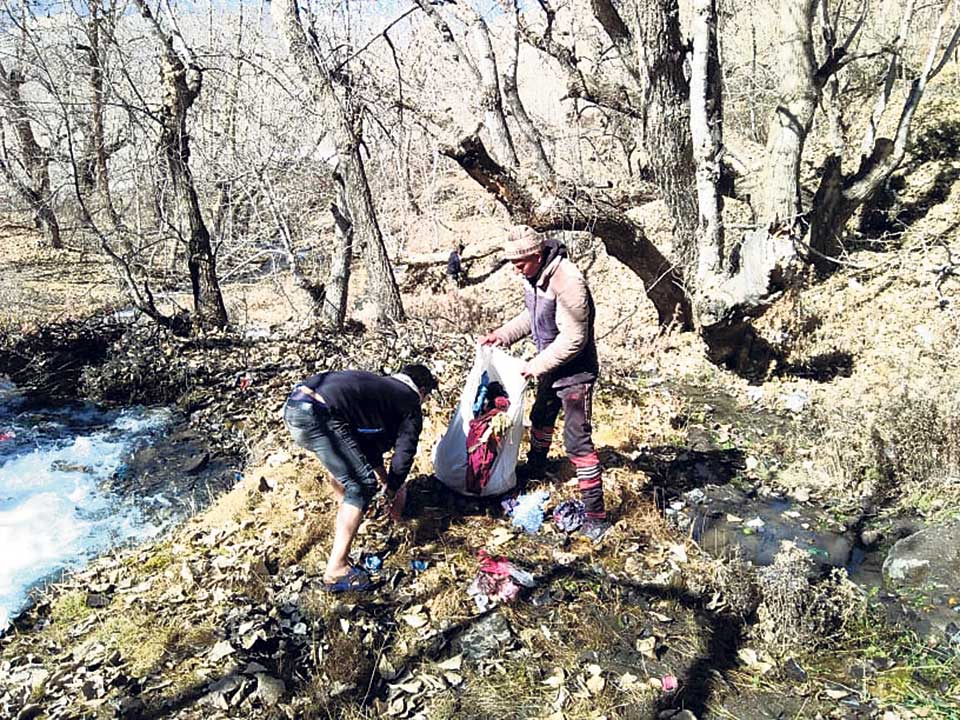 Pilgrims and workers collecting garbage in the Muktinath Temple area this week.

MUSTANG, Nov 3: Every day, thousands of domestic and international pilgrims throng Muktinath, the famous religious shrine in Mustang. In recent years, this place has evolved as one of the most preferred destinations for travelers. Various dignitaries such as Indian Prime Minister Narendra Modi have reached this site to see its mesmerizing beauty.

In the last four years, the number of domestic tourists visiting Muktinath has gone up significantly. However, the increasing number of visitors has added to the pile of garbage around the Muktinath area. A bad odor has started emanating from the dumped waste, making breathing difficult.

Pilgrims coming to this place are found throwing food, flowers, wrappers and even clothes. "Muktinath is losing its beauty and charm due to this garbage," said Prakash Paudel, of Myagdi, adding, "This must be controlled so as to protect the historical importance of this place." He expressed his disgust for those dumping their worn out clothes in Muktinath.

The miserable condition of the temple compelled Prakash, who was there on his one-day visit, to stay one more day and clean the site. The once beautiful temple today looks dirty, thanks to the rotting pile of garbage and hovering flies.

Paudel stressed that the authorities concerned should conduct cleanliness and sanitation programs regularly so that the temple does not lose its charm in the years to come. There are altogether 108 water taps and 2 ponds on the temple premises. It is believed that taking bath in those ponds washes away one's sins. Sadly, those who take a dip in the ponds for purifying themselves leave their clothes in the water.

Around eight sacks of garbage was collected in a day, said Paudel. "It's shameful that those who come here with the objective of washing off their sins leave their inner garments in the religious pond," said youth leader of Mustang, Pema Chedan, adding, "This must be a matter of concern for the temple management committee." According to Krishna Prasad Subedi, chief priest of the temple, there are two workers appointed for clean-up but they are not doing their job properly also because of the negligence of the committee, formed under the leadership of the Chief District Officer (CDO).

However, CDOs keep changing frequently which has made the implementation of rules and policies ineffective here. Fenchowk Chepten Gurung, chairperson of Barahgaun Muktichhetra Rural Municipality, says the situation will change only if the responsibility of the temple is given to the local unit.Caption: Pilgrims and workers collecting garbage from around the Muktinath Temple

POKHARA, May 9: Pilgrims visiting Muktinath, a popular religious shrine in the mountainous district of Mustang, will be banned from entering... Read More...