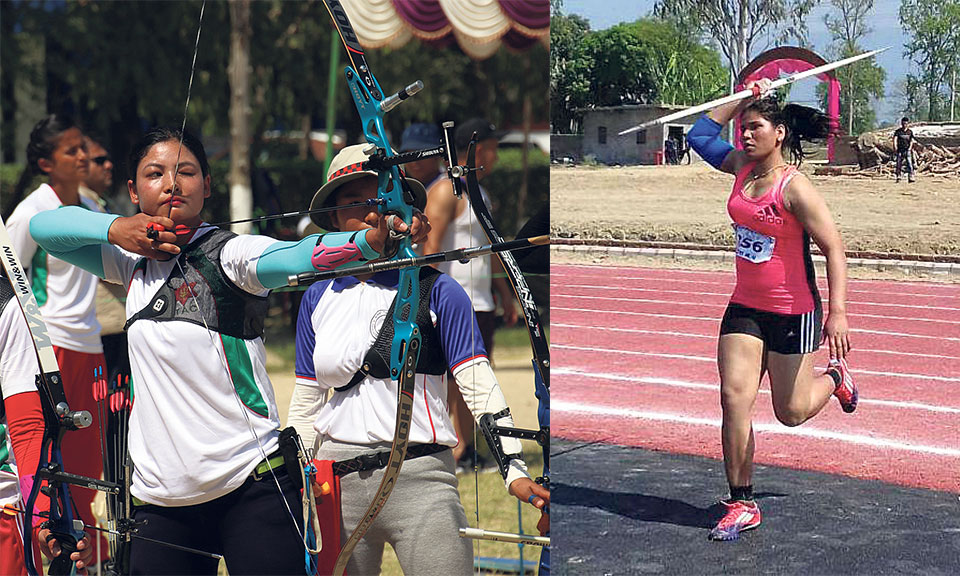 In women’s javelin throw at Beljhundi, Lamagde hurled the javelin to a distance of 44.05 meters to improve her own personal national record of 43.94 meters she had set at the National Sports Council (NSC) Championship in Itahari last year. Laxmi Tharu of Tribhuvan Army Club and Seema Kumari Tharu of Armed Police Force (APF) Club stood second and third respectively.
Lamagde had improved her national record in shot put on Thursday.

In the men’s category, Army’s Rohit Chaudhary threw the javelin to a distance of 53.58 to win the gold, while APF’s Manoj Dagaura and Police’s Birendra Chaudhary finished second and third respectively.

In women’s category, Gandaki defeated Province 5 22-4 and Province 3 15-4, Army beat Karnali Province 54-2, Sudur Paschim saw off Province 2 7-2 and APF overcame Province 1 28-10.
The tournament features nine teams each in both categories including seven provincial teams, Army and APF. The final will be played on April 23.

Archery
The qualifying round matches of the ninth National Archery Tournament has been played in different categories on the first day.

In the women’s recurve, Army’s Gyanu Awale, Aaisha Tamang, Mittra Rai and Annapurna Archery Club’s Bishnu Maya Limbu along with eight other players went through from the qualifying round.
In the men’s category, Kaski’s Mukesh Tamang and Arshim Sherchan, Army’s Roshan Nagarkoti and Nepal Police Club’s Tilak Pun along with 16 other players cleared the qualifying round.

A total of 88 players throughout 10 different categories are taking part in the tournament which runs till Sunday.

Volleyball
APF and Province 3 have registered wins in the women’s category of the ongoing Volleyball Tournament.

Badminton
The final of the mixed doubles of the 40th Badminton Tournament will feature two APF pairs.
The pairs of Puja Shrestha and Dipesh Dhami, along with Jessica Gurung and Gautam Singh Kathayat will take on each other for the mixed doubles title.

Likewise, Army’s Tamang has set the final clash of the men’s singles with his familiar nemesis APF’s Dhami.

After taking a revenge for his earlier loss against Sudur Paschim’s Prince Dahal 21-11, 21-9, Tamang will face Dhami in the final. Dahal had beaten Tamang in the men’s singles of team event. Also, Dhami beat Province 1’s Bikash Shrestha 21-11, 21-15 to reach the final.

Similarly, Army has continued its domination as both Nangsal Devi Tamang and Rasila Maharjan both reached the final. Tamang saw off Province 1’s Sita Rai 21-17, 21-9, while Maharjan cruised to a 21-17, 21-18 sets victory over Army’s Anu Maya.

In the men’s doubles, APF’s Dhami and Bijit Thapa Magar overcame APF’s Suroj Maharjan and Praphul Maharjan 21-13, 21-12 to set the summit clash with Army’s Ratnajit and Nabin, who got past Army’s Pabin Lingthep and Rukesh Maharjan 21-11, 21-19.

NEPALGUNJ, April 20: The first round of the 24th National Men’s and 23rd National Women’s Shooting in the Eighth National Games... Read More...