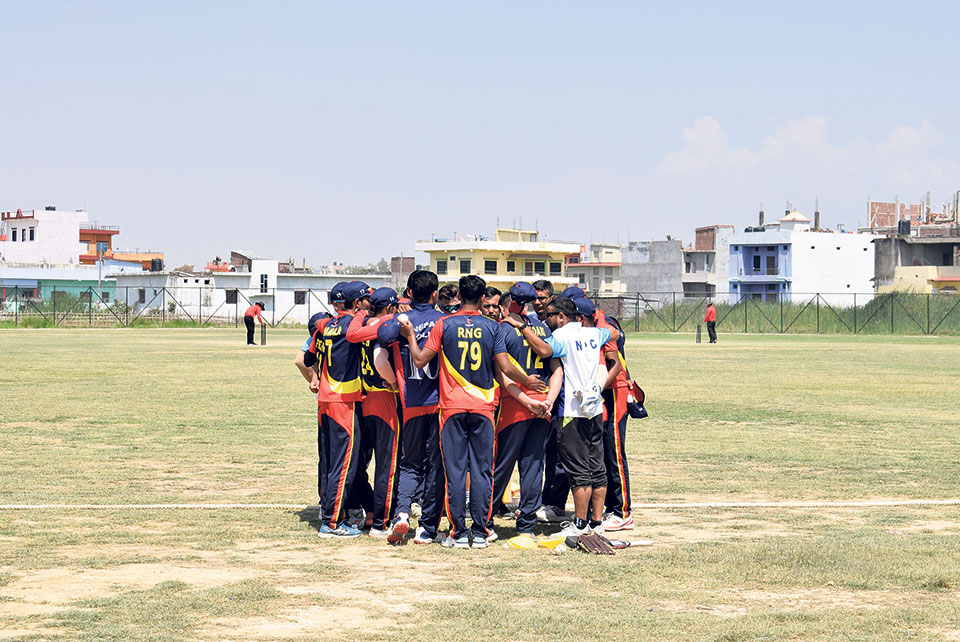 Players of Nepal Police Club gather during their cricket match against Gandaki Province at the Eighth National Games in Bhairahawa on Friday.

KATHMANDU, April 20: Nepal Police Club defeated Gandaki Province by 28 runs to continue its winning streak in a T20 match during the ongoing Eighth National Games held at Siddharth Stadium in Bhairahawa on Friday.

Police Club won the toss and scored 135 runs before getting all out in 19.5 overs. Kushal Bhurtel top-scored with 45 runs followed by player of the match Aarif Sheikh’s 34 and Amit Shrestha’s 16 runs during the first innings.

Gandaki’s Karan KC, Kishore Mahato, Bipin Khatri and Amrit Gurung shared two wickets each.
In reply, Gandaki was limited to 107 runs for the loss of seven wickets in the 20 overs. Aakash Thapa and Suman Ghimire contributed 30 and 28 runs respectively.

Similarly, in the second match of the day played at Bhairahawa, Province 5 defeated Sudur Paschim Province by 22 runs.

Province 5 won the toss and batted first to score 137 runs for the loss of eight wickets in 20 overs. Player of the match Rajbir Singh top-scored with 58 runs for the winning team supported by Suraj Barai’s 33 during the first innings. In bowling, Bikash Agri took four wickets supported by Arun Airee’s 2.

In reply, Sudur Paschim was limited to 115 runs for the loss of nine wickets in 20 overs. Arun top-scored with 35 runs followed by Khadag Bohora’s 32. Sandeep Sunar and Bikram Bhusal shared two wickets each for the winning team.

Province 3 won the toss and elected to bat first but was bundled out for 34 runs in 15.2 overs. APF completed the chase in 5.2 overs.

Juggling between work and family life, working parents play the double role even in this time of pandemic
4 hours ago
Entrepreneurs set various preconditions to resume public transportation
4 hours ago