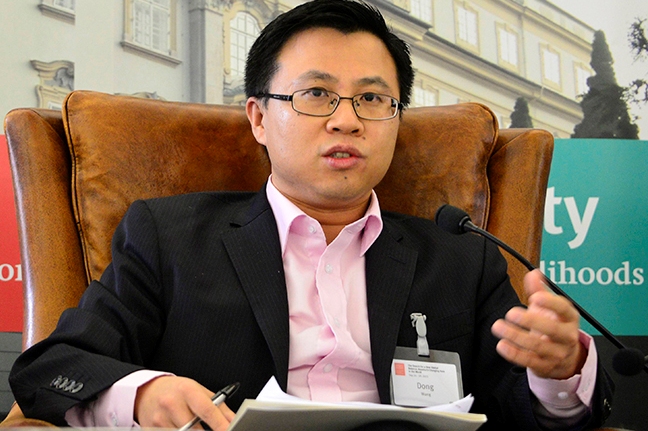 Speaking at a talk program on his latest book entitled "Re-globalization: When China Meets the World Again", Professor at China’s Peking University Wang Dong said that globalization has not come to an end nor is it entering a de-globalization era.

“I argue that globalization is not dead. Rather, globalization has entered into a new phase that can be called re-globalization,” he said during the program organized by Nepal Institute of International and Strategic Studies in Kathmandu.

He was of the view that China is contributing to the re-globalization through launching the mega initiatives like Belt and Road Initiative and Asian Infrastructure Investment Bank.

He also said that China is in favor of inclusive, consultative and balanced type of globalization. “China’s Belt and Road Initiative can help generate economic growth by developing infrastructures in various countries and regions,” the professor said.

While talking about the concept of re-globalization, the professor said that it helps to restore the legitimacy of the globalization.

“Re-globalization helps to bring back certainty in the world at a time when the uncertainty is on the rise after the Trump administration came to power in the United States,” he argued.

In his book, Dr. Wang has given a comprehensive and innovative examination of China's leading role in shaping the dynamics and trends of Re-globalization by honing in on several cases, including Belt and Road Initiative, Asian Infrastructure Investment Bank, and Alibaba.

Wang's new book "Re-globalization: When China Meets the World Again" was launched in China in May last year which argued that the globalization would not diminish, but rather entered a new stage.

"Western countries once thought that globalization is nearly dead, and the world will once again get back to an order dominated by geopolitics. Although overall geopolitics has a tendency to return, globalization will not perish, but will enter a new stage," Wang Dong said.

Wang, who is currently visiting Nepal, is an associate professor at School of International Studies at Peking University in Beijing.

While the produce and proceeds of crime flow seamlessly across borders, justice and law enforcement remain largely trapped, and are... Read More...

My message to Global leaders

Earth is having a fever. Its temperature is rising and it’s already hot, getting much colder in winter. It’s normal... Read More...

How can we improve our export?

Nepali industries have been receiving protection for many years. The protection has resulted in our industries not willing to go... Read More...