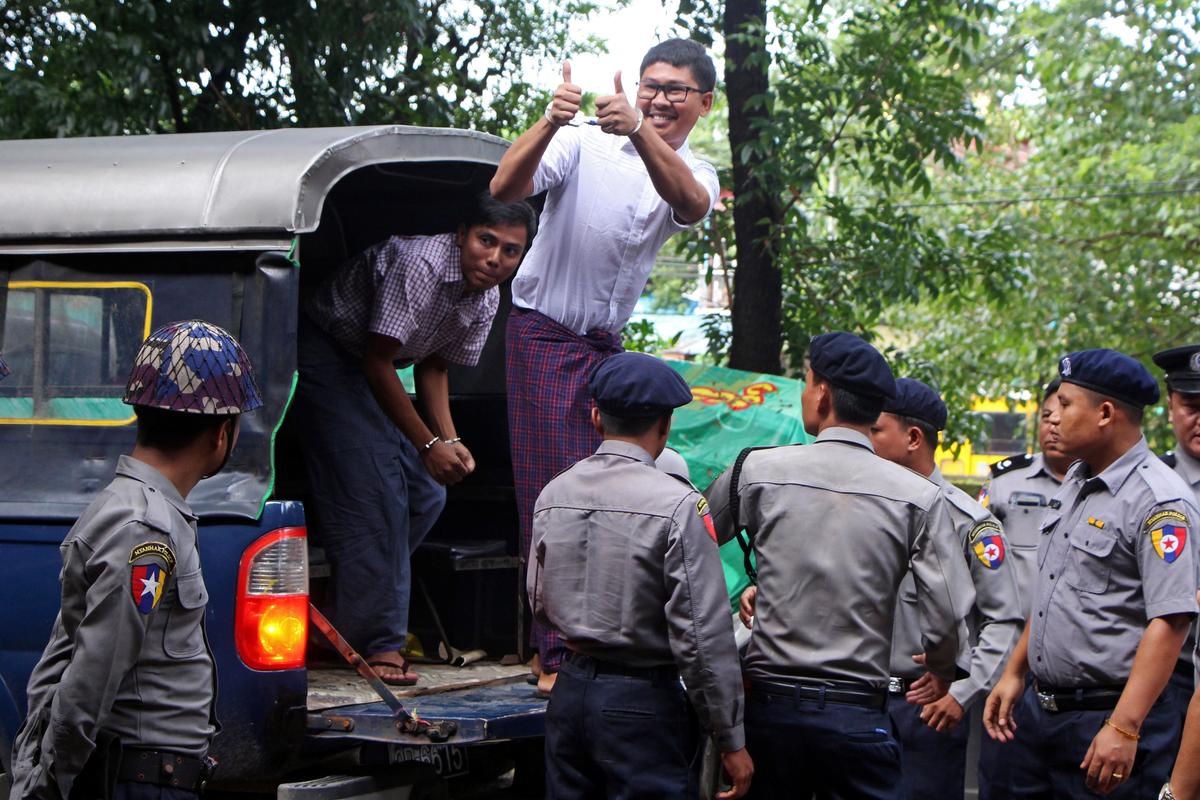 NEW YORK, April 16: Reuters won two Pulitzer Prizes on Monday, one for revealing the massacre of 10 Muslim Rohingya men by Buddhist villagers and Myanmar security forces, and another for photographs of Central American migrants seeking refuge in the United States.

Two of this year’s honorees have been jailed for 490 days in Myanmar for their role in uncovering the killings.

“While it’s gratifying to be recognized for the work, public attention should be focused more on the people about whom we report than on us: in this case, the Rohingya and the Central American migrants,” Reuters Editor-in-Chief Stephen J. Adler said.

In other categories, coverage of mass shootings in the United States and investigations into U.S. President Donald Trump featured prominently. The New York Times and the Washington Post also took two Pulitzers each.

Reuters and the Associated Press were both awarded prizes for international reporting, with the AP winning for its coverage of war atrocities in Yemen.

The Reuters award was for an investigative report that revealed the massacre of 10 Rohingya at the village of Inn Din, in the heart of the conflict zone of Rakhine state in Myanmar.

Two young Reuters reporters, Wa Lone and Kyaw Soe Oo, both Myanmar citizens, found a mass grave filled with bones sticking out of the ground. They went on to gather testimony from perpetrators, witnesses and families of victims.

They obtained three devastating photographs from villagers: two showed the 10 Rohingya men bound and kneeling; the third showed the mutilated and bullet-ridden bodies of the same 10 men in the same shallow grave.

In December 2017, before Wa Lone and Kyaw Soe Oo could complete their story, they were arrested in what international observers have criticized as an effort by authorities to block the report. The report, “Massacre in Myanmar,” was completed by colleagues Simon Lewis and Antoni Slodkowski and published in February of last year.

In the breaking news photography category, 11 Reuters photographers contributed pictures to “On the Migrant Trail to America,” a package of images showing asylum-seekers and other migrants from Central America at the U.S. border.

One photo by Kim Kyung-Hoon showed migrants fleeing tear gas launched by U.S. authorities into Mexico at the San Diego-Tijuana border. In the image a mother grabs her twin daughters by the arm, one in diapers and wearing rubber sandals, the other barefoot, as a teargas cannister emits its fumes.

In another image, an aerial photo, Mike Blake was the first to photograph the detention facility in Tornillo, Texas, where children walked in single file, like prisoners.

Goran Tomasevic captured an image in San Pedro Sula, Honduras, a city with one of the highest murder rates in the world, of a rooster scratching in the dirt next to the slain body of a Barrio 18 gang member. Tomasevic was a previous finalist for his pictures of the war in Syria.

The New York Times won a prize for explanatory reporting of Trump’s finances and tax avoidance and another for editorial writing by Brent Staples.

The Washington Post’s Lorenzo Tugnoli won the feature photography prize for images of the famine in Yemen and the newspaper’s Carlos Lozada also won for criticism.

The Wall Street Journal won the national reporting prize for uncovering Trump’s secret payoffs to two women during his campaign who claimed to have had affairs with him.

Coverage of mass shootings in the United States was also recognized four times.

The South Florida Sun Sentinel won the public service award for “exposing failings by school and law enforcement officials before and after the deadly shooting rampage at Marjory Stoneman Douglas High School,” the Pulitzer board said. Seventeen people died in the massacre at the Parkland, Florida, high school on Feb. 14, 2018.

The staff of the Pittsburgh Post-Gazette won the breaking news prize for its coverage of “immersive, compassionate” coverage of the massacre at Pittsburgh’s Tree of Life synagogue that killed 11 people on Oct. 27, 2018.

Pulitzer administrator Dana Canedy, upon announcing the winners, also offered admiration for a non-winner: the staff of the Eagle Eye student newspaper at Marjory Stoneman Douglas High School for its coverage of the killings.

The Pulitzer board also awarded a special citation to the Capital Gazette of Annapolis, Maryland, for “their courageous response to the largest killing of journalists in U.S. history in their newsroom.” A gunman shot and killed five people there on June 28, 2018.