US military planes land near Venezuela border with aid 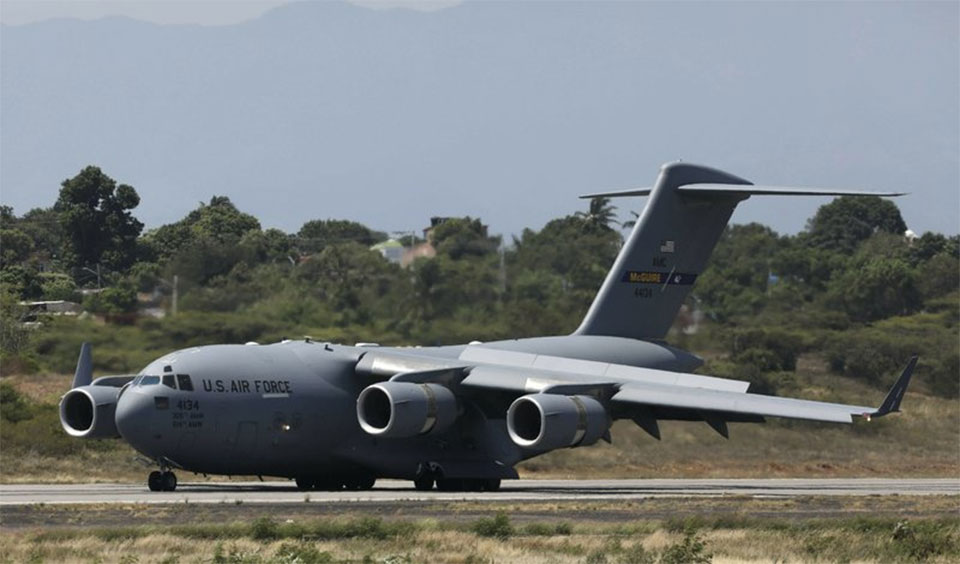 CUCUTA, Feb 17: The U.S. military airlifted tons of humanitarian aid to a Colombian town on the Venezuelan border Saturday as part of an effort meant to undermine socialist President Nicolas Maduro and back his rival for the leadership of the South American nation.

Three scheduled Air Force C-17 cargo planes that took off from Homestead Air Reserve Base in Florida had landed in Cucuta. That border city, swollen by a flood of migrants from Venezuela, is a collection point for aid that’s supposed to be distributed by supporters of Juan Guaido, the congressional leader who is recognized by the U.S. and many other nations as Venezuela’s legitimate president. He has called for the aid.

“This wasn’t the first, and it won’t be the last,” said USAID Administrator Mark Green, standing on the tarmac in Cucuta at a ceremony to receive the aid. “More is on the way.”

Commercial planes had been used for earlier shipments of aid, which is aimed at dramatizing the economic crisis — including hyperinflation and shortages of food and medicine — gripping Venezuela. Critics say last year’s re-election was fraudulent, making Maduro’s second term illegal.

“We are saving lives with these airplanes,” said Lestor Toledo, an exiled politician who is coordinating the international aid effort for Guaido.

Maduro has been using the military, which remains loyal, to help him block the aid from entering Venezuela, describing it as “crumbs” from a U.S. government whose restrictions have stripped his administration of control over many of its most valuable assets.

“They hang us, steal our money and then say ‘here, grab these crumbs’ and make a global show out of it,” Maduro told The Associated Press on Thursday. “With dignity we say ‘No to the global show.’ Whoever wants to help Venezuela is welcome, but we have enough capacity to pay for everything that we need.”

His vice president has alleged, without evidence, that the aid packages are contaminated. Green on Saturday called the allegations “absurd.”

Saturday’s 180-ton shipment includes high-energy food products or hygiene kids of soap, toothpaste and other goods for more than 25,000 people.

Guaido spoke to a crowd of supporters gathered in eastern Caracas on Saturday and vowed to form caravans of activists to reach the border and bring in aid on Jan. 23. He also called for people to gather in cities across the country to receive the aid — and called for the armed forces to allow it into the country.

In the crowd was Anibrez Peroza, a 40-year-old nurse, who said she was ready if necessary to go to Cucuta in a caravan to bring in the aid.

“We have to do something to save so many people who are suffering and dying for lack of medicine,” she said. Peroza wept as she described a dehydrated child dying in her arms for lack of a catheter to rehydrate him.

The U.S. and widespread European recognition of Guaido complicates Maduro’s efforts to find funds to keep his government, and its own food programs, running.

Venezuela hit with new U.S. sanctions after clashes over food aid on border

Ruling NCP denounces US, allies for ‘intervening’ in Venezuela

KATHMANDU, Jan 26: Joining a few other major countries including China and Russia in support of President Nicolas Maduro of... Read More...