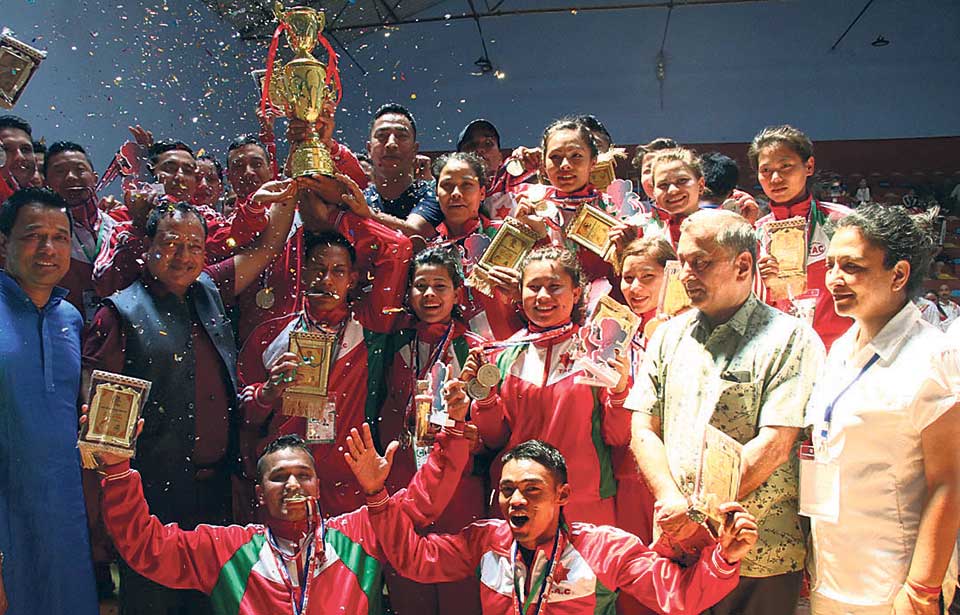 KATHMANDU, April 15: The departmental team Tribhuvan Army Club has become the champion in the fourth National Fencing tournament under the ongoing Eighth National Games on Sunday.

A total of 129 players participated in 12 different categories in fencing which started from April 11.

With the wins, APF has landed four gold in its medal tally. Likewise, Army claimed gold in team event, while the matches for two gold medals will be played on Monday.

In the women’s doubles final, the APF pair of Saloni Tamang and Ashlesha Lisano defeated Prerana Koirala and Anne Mathema 6-1, 6-2 to claim the gold.

Similarly, APF’s Koirala got past Army’s Rawat 6-0, 5-7, 6-2 in super tie-breaker to book her final clash with Bista.

The singles final matches will be held on Monday.

Army, APF, Sudurpaschim and Province 1 have advanced into the semifinals of the women’s team event in the 40th National Badminton Tournament.

Army defeated Karnali Province 2-0 on the first day of the tournament. Army will now take on Sudurpaschim, who beat Province 2 2-0.

Also, APF saw off Province 5 2-0 to reach the semis. APF will face Province 1, who got past Gandaki Province 2-0.

The other departmental team Nepal Police Club, Province 7 and Gandaki Province have advanced into the men’s semifinals of the 18th National Hockey.

Police defeated defending champion Army 2-1 to finish top of Group A and advance into the semis.

Likewise, Province 7 advanced as the runner-up of Group B beating Province 1 3-1.

Province 3 defending champion Bhawana Sunuwar won all her four matches and will now face Thapa for the title.

In men’s team event, Province 3 beat APF 2-0, while Gandaki saw off Province 1 with the same scoreline.