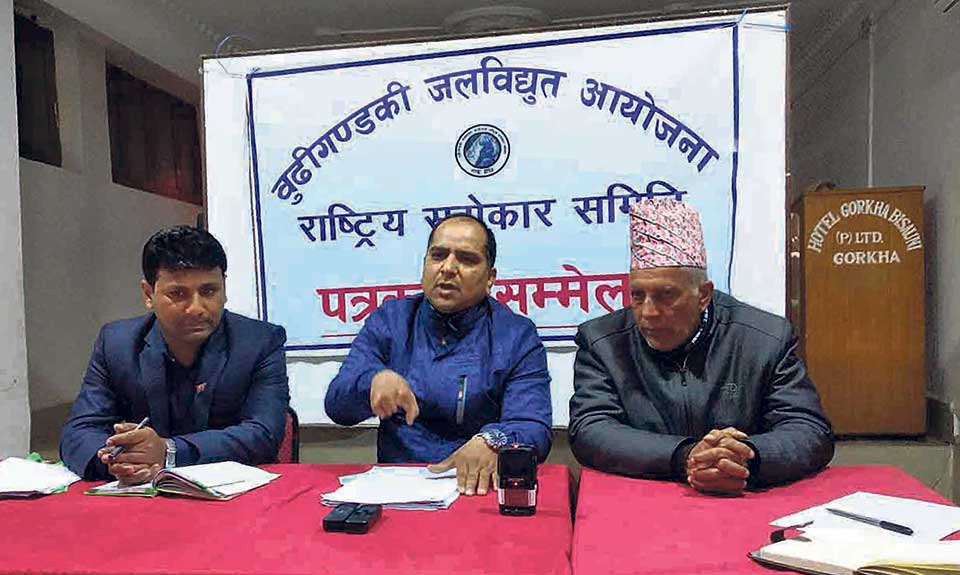 GORKHA, Feb 25: Locals of Gorkha and Dhading districts have raised concerns once again against the snail-pace progress of Budhigandaki Hydropower Project.

Organizing a press meet in Gorkha on Sunday, the National Concern Committee of Budhigandaki Hydropower Project said that the project was not progressing as expected.

The Government of Nepal has allocated Rs 17.37 billion for the project in the current fiscal year, and has planned to give additional Rs 9 billion if the allocated budget was all used up. Till date, the project has spent only Rs 6.15 billion, according to the committee coordinator Hare Ram Dhakal.

“The project is progressing at a snail’s pace. At first they claimed there was lack of budget, and now when the budget has been released, they are finding other ways not to speed up work,” he said.

The committee members have claimed that the project was failing to take up pace due to the negligence of project chief and other officials.

A decision was made in 2016 to provide compensation against the loss of houses, animal sheds, and plants. However, not a single rupee has been given under those headings, according to Dhakal.

“The project had publicly committed to give compensation against those losses, but they are yet to hand out compensation,” Dhakal added.

In the first phase, the project administration had distributed compensation to 62 household in Gorkha and to 33 households in Dhading for land acquisition.

Member of the committee Hari Simkhada said that the project has shown partiality while distributing compensation. “Earlier the project distributed Rs 773,000 for certain land, and now it is giving only Rs 525,000 for the same type of land,” Simkhada said.

Moreover, the project is yet to fix compensation amounts for households of Aarughat and Aarkhet of Gorkha, as well as Khahare Bazar and Aarughat of Dhading.

The committee members claimed that the project administration was holding back from handing out compensation, although it had enough money for it.

“If the project administration does not address our concerns, then we will have to start protests,” Dhakal said, warning that they might start legal case against the project.

As a symbol of protest against the unequal distribution of compensation, the committee had collected signature of 1200 locals from the affected area and submitted to the ministries of energy and home affairs.

Talking with Republica, project chief Krishna Karki said that the work of fund collection, compensation distribution, addressing of the public complaints, and land registration works have been delayed due to lack of manpower.

“We are collecting information from the affected areas, and without doubt, we will spend the entire budget allocated for the current fiscal year,” Karki assured.