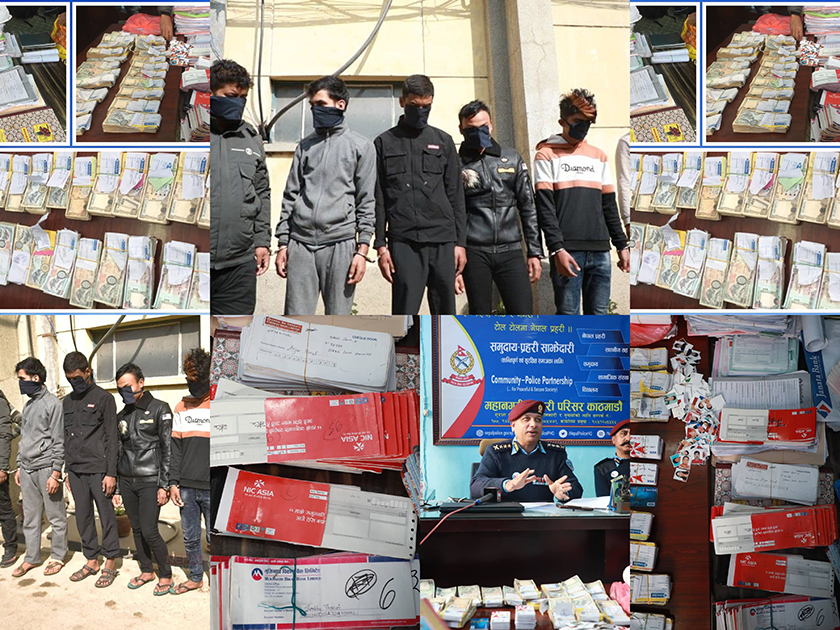 KATHMANDU, Nov 27: Police have arrested a gang of six persons from various places of Kathmandu on the charge of withdrawing money from others' accounts through fake cheques and signatures of the account holders.

According to police, they already withdrew over Rs two million from different banks in the capital.

The arrestees have been identified as Suvash Shreshta, Kumar Tamang, Manish Ghimire and Anjan Baral of Pachkhal, Kavre who are temporarily residing in Kalimati in the capital. Similarly, Suman Poudel of Galkot, Baglung and Govinda Ghimire of Sindhupalchowk were also apprehended. A police team deployed from Metropolitan Police Kathmandu apprehended them from various places of Kathmandu.

Kathmandu Police started an investigation after receiving a complaint from Gopal Man Rajbahak who owned an account in Janata Bank. According to Rajbahak, a total of 1.9 million was withdrawn from his account on Sunday. Although he had not issued any cheque to anyone, a huge sum of money was withdrawn at times. After he lodged his complaints, police started investigations after consulting the concerned bank and the officials of the Nepal Rastra Bank, the central bank of Nepal.

Police have also seized cheques of different banks, account opening forms, and ATM cards from those who were arrested. “After recovering those documents, it is suspected that they might have been plotting for a bigger banking crime,” said Hobindra Bogati, the spokesperson at Metropolitan Police Range. Police have also drawn the employees of NIC Asia and Mukti Development bank into the investigation.

According to the preliminary investigation, the group was found to be applying for new checkbook using a fake signature.

Police made public the arrestees at a press meet held at Metropolitan Police Range, Teku and informed. "We have launched a detailed investigation against them," the spokesperson added.

KATHMANDU, Sept 7: The arrest of former minister and Sadbhawana Party leader Shyam Sundar Gupta on Monday on a charge of... Read More...