A wonderful world of baked goodies 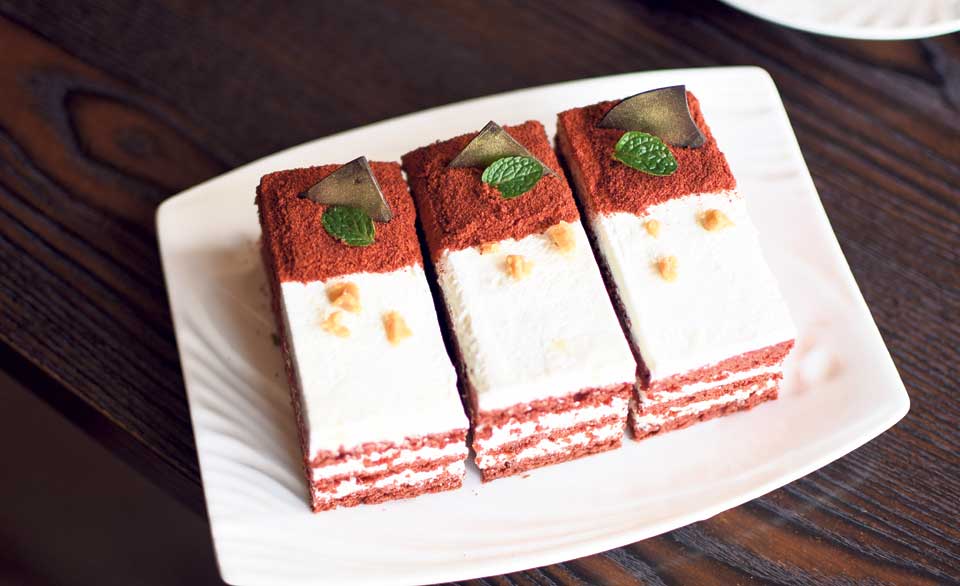 Dessert lovers beware: You won’t be able to stop gorging on these wonderful treats. Nana’s Delights, an artisan bakery located in Patan Dhoka in Lalitpur, has cakes, chocolates, and cookies (in interesting shapes and designs) that are unlike anything you have ever had before. We guarantee that. Funny thing is Aakash Nath Pyakuryal, founder of Nana’s Delight, claims that until about a year ago, they never even thought about making desserts. The bakery is one of the many business ventures under Nana’s Group that also run a chain of hotels in different cities of Nepal besides being involved in the real estate business.

Pyakuryal reveals that when Nana’s Delights first opened at Patan Dhoka, it was only supposed to be a new outlet of their hotel chain. But, this time around, the team decided to make the outlet more like a bread and breakfast place than a full-fledged hotel. One of the reasons for this was because the building they were operating from wasn’t big enough to be a hotel and the other reason was because Pyakuryal wanted it to be affordable.

However, this turned out to be a problem for them because the kind of customers they were trying to attract, mostly backpackers and rovers, were already accustomed to staying at hotels in and around Thamel in Kathmandu. They had also turned the first floor of this building into a café space to complement their bed and breakfast business. But again, no one seemed keen to walk up a flight of stairs to get to the eatery. And that was when Pyakuryal and his team thought of trying their hand at making artisan desserts.

Pyakuryal, who studied and lived in Australia for a while, reveals that from what he had seen dessert culture wasn’t a thing in Nepal back then. So he decided to take up the challenge of developing this culture through Nana’s Delights. During the initial phase of Nana’s Delights, Pyakuryal realized that to make this line of business work he had to approach other restaurants, cafes, and outlets that would be willing to take in and sell their products because their own cafe space was too small and its location wasn’t that favorable either.

He also claims that he is glad the team at the time had such creative and diligent members who could come up with good products even under such pressure. He believes that it was the combination of having a good team and being desperate to try anything to be able to sustain their cafe and B&B that pushed the whole team to keep working hard on developing Nana’s Delights in all aspects. He adds that the team has evolved since then with new members coming in and some old ones leaving.

Currently, Nana’s Delights lists cakes, chocolates, cookies, and desserts as their products. The chocolates and cookies are sold at different stores and marts in Nepal, including Big Mart, Alchi ko Pasal, Little Things, and at two souvenir shops at the departure lounge of Tribhuvan International Airport. Pyakuryal states that seeing Nana’s Delights’ chocolates at stores beside some of the biggest international chocolate brands feels like a huge achievement.

You might have also actually tasted their cakes and desserts at different restaurants in Kathmandu without even realizing it. Pyakuryal reveals that although a number of the restaurants that take in Nana’s Delights’ products make it a point to mention their name or credit them openly and publicly, a few restaurants made it clear that they can’t tell their customers that some of the items featured in their menu are actually from another eatery. “And, honestly, we are okay with that too,” says Pyakuryal.

In the future, Pyakuryal reveals that he wants to establish Nana’s Delights as a well-known brand, at least within Nepal. “You know how a lot of people conjure up an image of a bar of Cadbury Dairy Milk whenever somebody mentions chocolates? I want our brand to be so entrenched in the Nepali lifestyle that they think of Nana’s Delights whenever someone mentions chocolates or cookies,” he concludes.

Nana’s Red Velvet Cake is without a doubt the best Red Velvet Cake we have ever taste. It’s an upgraded triple layered version of their previous two layered one and uses an equal amount of cream cheese and the actual red velvet batter/cake and tastes simply amazing. The Mud Cake melts in your mouth and feels a little like a dream. The Lemon Coconut Cream Cake (which has lemon cake as its base), on the other hand, has a very interesting flavor, because it combines the sourness of the lemon cake and the sweetness of the cream cheese, but it’s pretty tasty even with those contrasting flavors being used together.

Chocolate Truffles
Varieties: Peanut Butter Truffle, Rum Truffle, Hand Roll Truffle and Mix Nut Truffle
Price: Rs 50 each
These chocolate truffles are crafted to perfection. And, surprisingly enough, all of the varieties available at Nana’s Delights do not taste the same and have a distinct flavor of their own.

Cookies
Varieties: Chocolate Chip Cookies and Date Crunch Cookies
Price: Rs 200 (for a pack of eight cookies)
Nana’s Delights’ cookies are irregular in shape and that makes them stand out. Like every other item we tasted at Nana’s Delights, these cookies too are well made and not sickeningly sweet. We liked the Chocolate Chip Cookies more because we are kind of biased towards chocolate chips but we have to admit that the Date Crunch Cookies were also quite tasty and filling.