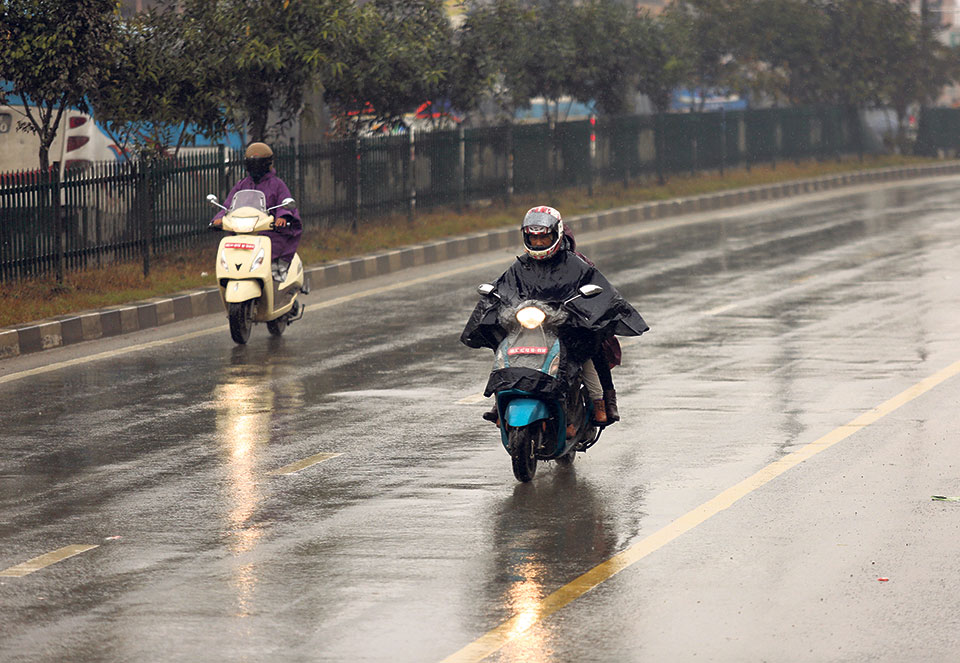 According to the Department of Hydrology and Meteorology (DoHM), the rain and snowfall will stop in the western parts of the country from Saturday. The weather will be clear in Kathmandu and the eastern parts from Sunday.

“The rain will continue with intervals,” said meteorologist Barun Paudel of the Meteorological Forecasting Division. “The western parts of the country will see rain in general and snow in the hills Thursday,” he said adding, “There will be rain and snow in eastern Nepal Thursday night and Friday.”

Snow fell Thursday in the far-western districts including Dolpa, Humla, Jumla, Bajura, Darchula, Doti, according to DoHM. Kathmandu had light rainfall of 3ml as of Thursday afternoon, with Pokhara receiving 7ml and Dang 8ml .

Manang, where the mercury fell to minus 20 degrees Celsius, has witnessed three snowfalls this winter including on Thursday . This is the heaviest snowfall in Manang in the last 15 years. Almost all parts of the district beyond the Himalayas were covered by snow Thursday. Conditions in Mustang are similar to adjoining Manang.

Bajura also witnessed snowfall. The district's Kolti airport has been paralyzed due to snow.

Snowfalls has affected daily life in different districts . Telecommunications and transportation have also have been hit by the rain and snow.