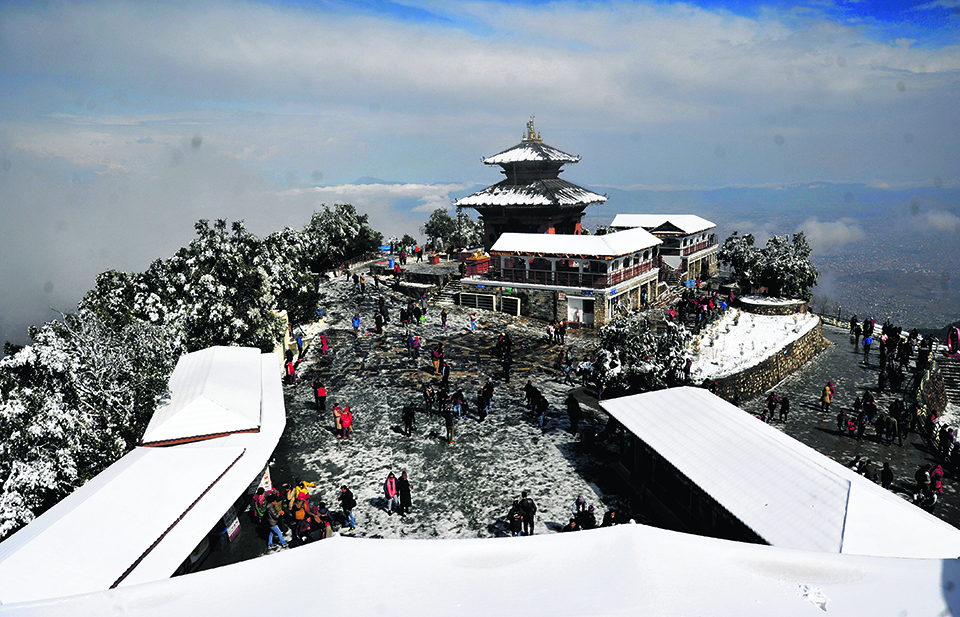 The higher altitudes in the Shivapuri-Nagarjun National Park in particular experienced snowfall after a gap of many years. Nagarkot in Bhaktapur district, Phulchowki in Lalitpur, and the Chandragiri and Champadevi hills were also covered in thick blankets of snow.

Valley denizens and residents of the surrounding hills rejoiced at the sight of snow. There was an increased movement of domestic tourists. Visitors to the Valley’s outer hills increased drastically following the snowfall. The excitement was very evident  in various social media posts on Saturday.

The Valley has been experiencing rainfall of varying strength since Thursday due to the  westerlies. It was torrential on Friday night. The Meteorological Forecasting Division (MFD) said the rainfall measured 21.5 mm in the last 24 hours.

Friday’s heavy rain coupled with thunder and lightening brought power outages for hours in many localities. In the Chhetrapati area, power outages lasted 17 hours.
The Valley’s frigid temperatures on Saturday dropped even further because of the  rain and snow. According to  MFD, the maximum temperature measured just 13 degrees Celsius while the minimum was 6 degrees .

Places beyond the Valley including Lumle, Bhairahawa, Simara and Pokhara  also recorded heavy rain while snowfall continued in the mountain districts.

MFD informs that the ongoing weather system will start clearing up from Saturday night.