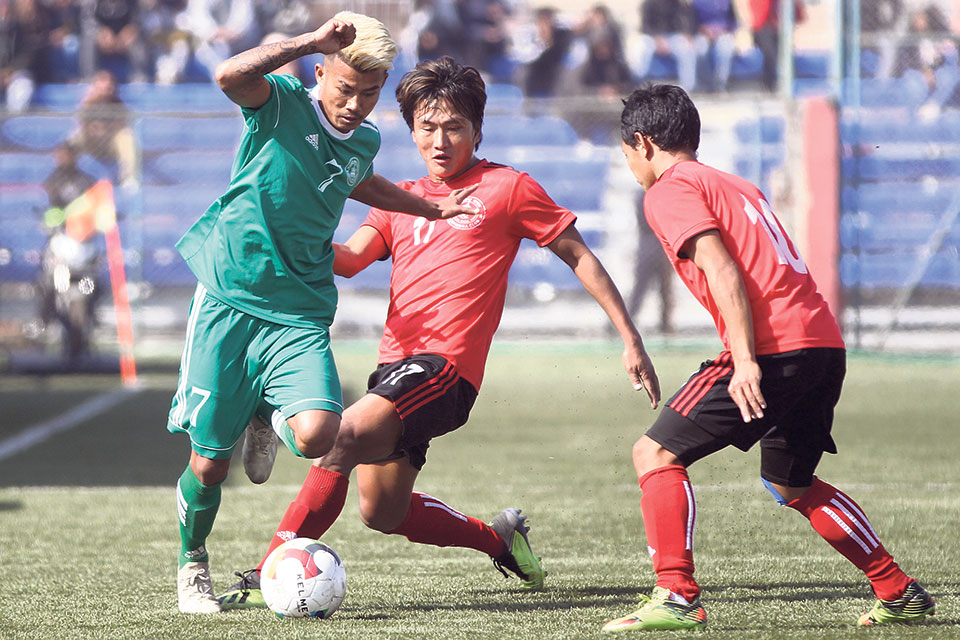 Brigade a point away from points deduction

KATHMANDU, Jan 1: Strugglers New Road Team and Machhindra Club were involved in the most outrageous game of the season as the bottom table clubs shared the spoils of a 5-5 draw in the ongoing Martyr’s Memorial A-Division League in Lalitpur on Monday.

At the All Nepal Football Association (ANFA) Complex at Satdobato, Machhindra could not keep its 4-1 lead and went into the second half with a 4-4 draw. A goal apiece in the second half meant the team shared a point in a thrilling encounter.

Vassadia Dimande gave Machhindra the lead in the fourth minute of the match, but New Road replied instantly in the ninth minute after a terrible mistake by Machhindra keeper Deep Karki when Saheed Gbenga Anifowose passed the ball to him and his lapse of concentration cost the goal.

Machhindra took the lead again just a minute after conceding as Bishal Rai scored one of his brace in the match, while Khamir Glishan Kandangwa made the score 3-1 inside just 28 minutes scoring a wonderful goal from just outside the box.

After just two minutes of scoring its third, Machhindra looked impervious as it bagged its fourth goal through Anil Gurung.

With 4-1 within the first half hour, the result looked inevitable for Machhindra, and it would be a splendid win for the team without a doubt. But, as New Road began exploring its attacking thrust, it managed to get two goals in the first half.

Ashok Thapa was in the thick of things for New Road as he scored a brace in the space of two minutes to bring back the game to its head. First, he converted a simple chance from a good passing display, while two minutes later, he completed his brace flat-footing a terrible Machhindra defense line.
Sushil Lama then converted a free-kick in the second injury-time minute making the score 4-4 in the first half.

Both the teams were trying not to concede any further, so they kept hold of the possession in the game by switching defense into attack faster.

Then, a calm and slow possession game by Machhindra kept it still in charge of the game which could have turned on its head inside the blink of an eye.

That was the case in the second half as Machhindra took the lead for the fifth time, but conceded again in the dying stages.

Machhindra’s Rai scored a delightful header after Uttam Gurung provided a good ball inside the box with a free-kick in the 64th minute. But, its happiness could not last long as Kouassi Jean Didier Ismael Yobue hit a brilliant volley in the 86th minute from outside the box to break Machhindra’s heart.

Machhindra’s terrible defensive performance and the day where keeper Karki could not handle the ball properly cost it the powerful lead. And, all that just to share a point.

After the result, New Road is still languishing at the bottom of the table with six points from 12 games, while Machhindra is a place ahead of New Road with seven points from the same number of matches.
In the other game played later on the same day at the Armed Police Force (APF)’s Halchowk Stadium, departmental team Tribhuvan Army Club failed to climb up to the third place after playing a goalless draw against Jawalakhel Youth Club.

Army had to share a point with Jawalakhel, failing to get past a strong Jawalakhel defense line. Despite creating several chances and dominating the game, Army could not utilize its chances to score.
After the draw, Army can still finish above Three Star, if the latter loses both its remaining games. Army has 22 points from 12 games, while Jawalakhel is safe from the points deduction and has 12 points from as many games.

In the other match played later in Satdobato, Brigade Boys Club registered its second win of the season thrashing Friends Club 3-0.

A brace from Kazeem Adegoke Busari and a strike Abdu Kareem Hamod Nsiah helped Brigade defeat Friends. Friends had to win this game to avoid the last two places which will see the team get its point deducted next season.

Busari scored the first goal of the match in the 16th minute, while he completed his brace in the 46th minute.

Nsiah scored the third goal for Brigade sending the game beyond all doubt with a strike in the second minute of the injury time. After the win, Brigade has nine points from 12 games and a point will secure it from the points deduction, while Friends has the same number of points from 12 games.

Nepal winless in second round qualifiers

KATHMANDU, May 1: Nepal U-19 women's football team went down 2-1 to Myanmar in AFC U-19 Women’s Championship Second Round Qualifiers... Read More...

In pics: People celebrate Gaijatra in Sankhu
11 hours ago

After death of an elderly due to COVID-19, 14 of his family members test positive for virus in Morang
15 hours ago