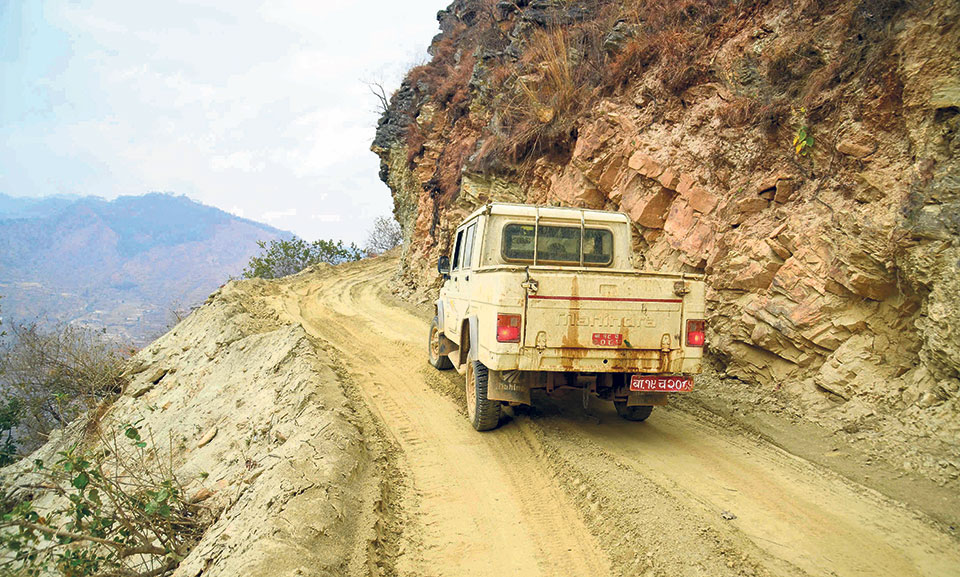 A view of the Ranigaun Block of Koshi Corridor Road. Photo: Giriraj Baskota/Republica

PANCHTHAR, Aug 10: About 55% work of the 148-kilometer-long road of Koshi Corridor has been completed. The road connects the eastern hills to the East-West Highway, with an aim to considerably shorten the distance to Kathmandu.

According to project chief Abhiman Mulmi, work on the 10-meter-wide track is progressing rapidly. “Works including graveling were contracted out in seven packages,” said Mulmi. “Observing the pace of the works, we can say the construction will be completed on time,” said Mulmi.

This is the shortest road that connects Panchthar, Taplejung, Tehrathum and Dhankuta districts to the tarai.

All the packages are moving forward rapidly, according to Mulmi. The work is going on in all blocks. About 135 kilometers of the preliminary track has already been opened. At one place, a three-kilometer stretch has been blocked for digging the road, while in other blocks, tracks will be opened soon.

The total contracts for the project were worth Rs 6.15 billion.

In the Fiscal Year 2018/2019, Rs 3.64 billion was spent on the project. The road is a priority for many districts of the eastern hills. The work has been carried out through ‘Koshi Corridor Hill Road Expansion Project 2’ under the Lokmarga project.

“The work has been satisfactory in all fronts. The contractors are working well and there is excitement at the local levels,” Mulmi said. It is said that the road is crucial to reach bigger hospitals in towns including Biratnagar. The project office has given out contracts to different companies to complete the works in 30 months. Koshi Corridor has been established to directly connect the tarai region with the eastern hilly areas.

As the Koshi Corridor is a national priority project, it has received good support from the government, according to the project office.

One killed, six injured as bus collided head-on with truck

SARLAHI, July 2: One killed and six sustained injuries when a bus collided head-on with a truck in Sarlahi. ... Read More...

URLABARI, Sept 2: A pedestrian died after being hit by a motorcycle along the East-West highway in Patharisanischare municipality-2 last... Read More...