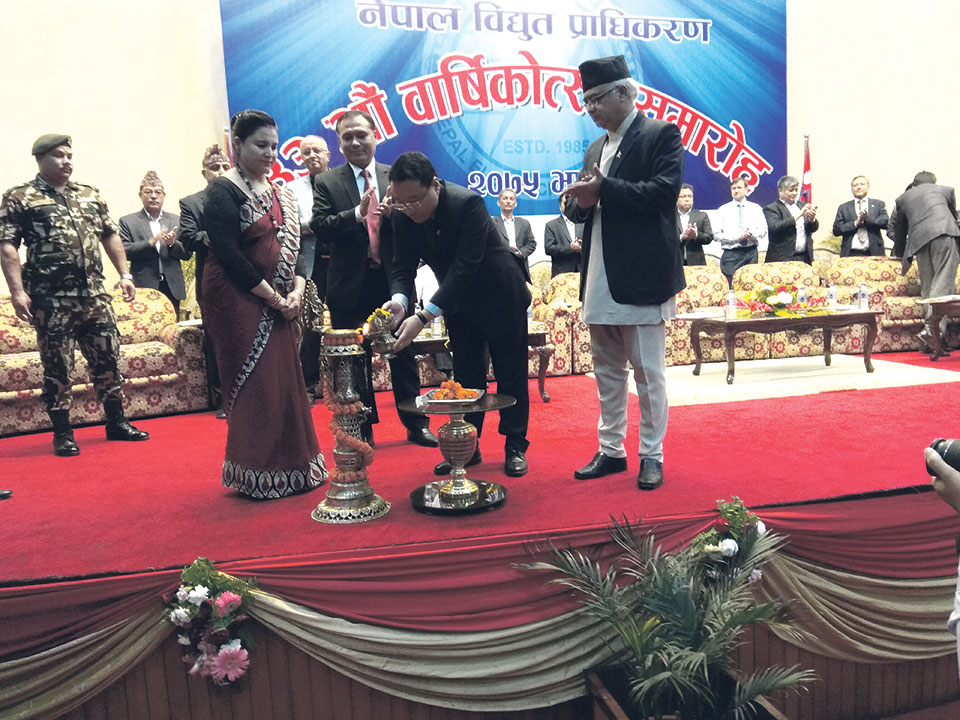 Electricity supply up by 12.79 percent;
NEA’s income increase by 16.98 percent

KATHMANDU, Aug 18: An additional five percent of the population was connected to national electricity grid in the last fiscal year ending mid-July. With this, 70 percent of the population has now power connectivity.
The total number of consumers units of Nepal Electricity Authority (NEA) has increased to 3.55 million, as per the annual report made public by the authority on Friday. Of them, 93.83 percent are households while the remaining 6.17 percent are industrial consumers.

Electricity sales to the households contribute to 45.13 percent of the total revenue of the NEA, while 36.15 percent of the revenue comes from the industrial consumers.

The NEA’s overall annual income from electricity sales and other sources increased by 16.98 percent to Rs 60.48 billion in the fiscal year.

However, the authority’s operating costs increased by 17 percent to Rs 52.62 billion. Despite huge progress in loss control, by nearly 6 percent to 20.45 percent of total available electricity supply and new plant Chameliya Hydropower Project of 30 MW coming into the national grid in April, the operating costs saw a whopping growth.

Speaking at a the 33rd anniversary event of the authority in Kathmandu on Friday, NEA’s Managing Director Kulman Ghising said that salaries paid to new employees, more electricity purchased from the private sector, import from India, and hike in maintenance costs were the reasons behind the rise in operating costs. Because of this, NEA’s net profit declined to Rs 1.01 billion from the net profit of Rs 1.51 billion in FY2016/17.

The NEA has said that it has paid 61.54 percent of revenue of electricity sales to IPPs and Indian suppliers, while price hike of both electricity purchases accounted 19.36 percent growth. The NEA has spent Rs 1.77 billion for other operating expenses, 1.35 billion for paying royalty, and Rs 1.99 billion for electricity transmission.

The interest paid by the authority on long-term loans was Rs 4.08 billion, which was only Rs 3.54 billion in the previous year. Likewise, its expenses for pension, gratuity and health benefits of its employees amounted to Rs 2.5 billion.

The expense for electricity distribution and NEA’s administration was in the tune of Rs 7.82 billion and Rs 1.71 billion, respectively.

On the occasion, Minister for Energy, Water Resources and Irrigation Barshaman Pun stated that plans were underway to build electricity plants by issuing shares to the total 5.6 million households. “Each household will get returns regularly as the senior citizens are paid allowances,” added Pun.

NEA to launch programs to increase domestic consumption of electricity

We refuse to believe that NEA that provided uninterrupted power supply for the last four years under the leadership of... Read More...