5 easy ways to incorporate Ayurveda into your life 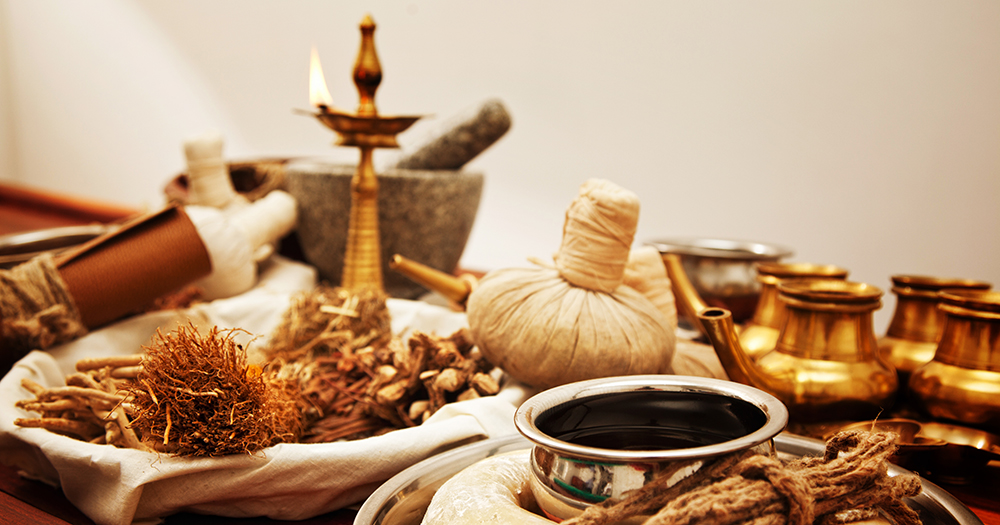 Thousands of years ago, before modern medicine and peer-reviewed journals, a holistic form of wellness developed in India. The idea was pretty simple: Health and wellness are a balance of mind and body, each person is different, and our environment has profound impacts on our health. (Sounds genius, right?)

Well, today, Ayurveda—known as a complementary health approach in this country—is thought to be one of the world's oldest medicinal systems. And many of its broader teachings (the importance of a healthy diet, the power of deep sleep and meditation, tuning in to the body's natural rhythm) are just starting to be supported by those peer-reviewed journals and modern-day doctors. Example: This past October, the Nobel Prize went to scientists studying circadian rhythm, discovering how "plants, animals, and humans adapt their biological rhythm so that it is synchronized with the Earth's revolutions."

True practitioners of Ayurveda benefit from understanding the balance of their doshas (or energies that make us up) and zero in on specific teachings of the health system. But if you're interested in dabbling in it, the good news is that it's super easy to add a little bit of Ayurveda to your routine. Start with these five tips.

Be honest: How often do you lie in bed and scroll an endless Instagram feed? Though addicting, this goes against biology. "Human beings are diurnal animals. This means we sleep when it is dark and are active when the sun is out," says Erin Casperson, dean of the Kripalu School of Ayurveda.

There's good reason to nix the habit and hit the sheets earlier, too. Both science and Ayurveda demonstrate that our non-dreaming, regenerative stage of sleep (called non-REM sleep) happens earlier in the night, she notes. That, in part, is why Ayurveda teaches us to wake up with the sun and go to sleep when it sets.

A simple way to adapt that to modern living? Try to be in bed by 10 p.m. and wake up closer to sunrise, Casperson says. If you're a night owl, exposing yourself to sunlight early in the day and often can help regulate your body's internal clock, promoting an earlier bedtime, finds research published in the journal CELL.

Give yourself a massage.

Abyangha, or self-oil massage, is an important way to detox the lymphatic system (the tissues and organs that carry white blood cells, which fight infections, throughout the body) and soothe the nervous system from stress, says Kimberly Snyder, a yoga and Ayurveda expert and author of the book Radical Beauty, which she coauthored with Deepak Chopra. (Oil massage is *also* just super nourishing for the skin.)

To pick up the habit, she suggests lathering up in coconut oil in warmer months, and sesame oil (not toasted) in colder months. Spend a few moments making long strokes toward your heart from head to toe, then hop in the shower. "The hot water helps some of the oil penetrate transdermally." If you want, do a little scalp massage, which is an important component of Abyangha, too. It's also said to help with hair health and growth. (Related: Ayurvedic Skin-Care Tips That Still Work Today)

Hydrate in the a.m.

When you think of Ayurveda, you might think of hot lemon water—but Casperson says the lemon part is really more of a modern add-on, not something rooted in ancient texts. The real Ayurvedic practice is more about hydration and heat. "When we sleep, we lose water through exhalation and through our skin. So, in the morning a mug of water will help replenish the fluids," she says.

As for the hot part? One of the most important concepts in Ayurveda is the fire element, called Agni. In classic texts, the digestive system is said to be a fire. "It cooks, transforms, and assimilates food and liquid," says Casperson. When water is warm, it's closer to our body temp (98.6°F) and won't "put out the fire" as cold water may, she notes.

But no matter how you take your H2O, the biggest takeaway is to simply drink up. Fending off dehydration from the moment you wake up keeps bad moods, low energy, and frustration (all symptoms of a lack of water) at bay.

Cook your own food.

The problem is, Americans spend more money at restaurants than at grocery stores. "We are disconnected from food," says Casperson. To reconnect, join a CSA, go to your local farmers' market, grow herbs in your kitchen, or plant a garden, she suggests.

Change up your selection of herbs and spices seasonally, too, says Snyder, who suggests keeping cinnamon, cloves, cardamom, and nutmeg on hand in the winter; and mint, fennel seed, cilantro, and coriander in the summer. "Spices can be used like medicine to help balance body and mind."

At its core, Ayurveda is rooted in mindfulness—and the idea that nothing has more power to heal and transform the body than the mind.

That's why practitioners swear by meditation. "It brings you to a state of extended awareness and inner peace that enables the mind to refresh itself and restore balance," says Snyder. Meditation also slows your heart rate, your breath, and the release of the stress hormone cortisol.

Don't have time to meditate? "Slow down—even for a breath," says Casperson. "A few long breaths that fill our entire abdomen can feel as nourishing as an hour-long massage." Set your phone's home screen to an image of the word "breathe" or put a sticky-note on your computer monitor to remind yourself.

When you each know the other is on board, you'll be less intimidated to initiate and more willing to accept... Read More...

‘Live your life with compassion’

KATHMANDU, Sept 16: Born and raised in Kalimpong, India, Bipul Chhetri is probably one of the most popular figures in... Read More...