Kharpan man photo a blast from the past

BHAKTAPUR, May 26: Some three and a half decades ago,  farmer  Dhruba Prajapati was heading for his fields in Bhaktapur. As usual, he carried his two small kids in a kharpan (shoulder bamboo with baskets dangling from either end). Unbeknownst to Prajapati, somebody captured the image in a camera. A few weeks ago, he was able to see the picture.

The photo experience begun two months ago when the kharpan picture caught this scribe’s eye while browsing the Internet. Identifying the man with the kharpan and his kids took a little time.

Prajapati is now 71 and the two little children in the picture are 39 and 37. When they saw the photo,  the whole Prajapati family could not look at it enough.

“My daughter was just four then and my son just two,” said Prajapati beaming. “Now they are grown up with kids of their own.”

But it took Ratnakumari, a 74-year-old neighbor, to clear the Prajapati family of any doubt about who those in the picture were.

“It’s none other than Dhruba,” she said full of excitement. “He used to carry his children to the fields  every day. Look at the face; it has not changed much even now. And the two children, oh how lovely they were!”

Prajapati’s wife Purnamaya would often fall sick. He would often take all three of their children with him to the fields in his kharpan so that they wouldn’t be any bother to her at  home.

“We didn’t have any bicycle or motorbike then,” Prajapati reminisced.

He carries his kharpan even now and works in the fields although he is not as strong as he used to be.

For Ashtakeshari and Suman also, the two children in the photo who are now grown-ups, it was a powerful blast from the past. They recalled how their father would loiter in the fields for hours just to add to their fun.

“I am so grateful to whoever took this photo. Having a photo taken in those days was very rare,” said Ashtakheshari, the mother of a nine-year-old.

Her brother Suman is an engineer and a father of two. Unlike his father, he does not carry his kids about in a kharpan. However, he did work in the fields.

“Times have changed. We have advanced. I used to ride a bicycle and later a motorbike,” he said.

Meanwhile,  Tejeshwar Babu Gwonga, an expert on local culture,  noted that the kharpan was  iconic for Bhaktapur. It was  part of daily  life.

“I too have been carried in a kharpan; the kharpan was a carry-all,” he added.

The chance photographer
Dr Richard F Darsie came to Nepal in 1966  as a USAID malaria eradication expert. He traveled in Nepal extensively, according to his son Richard Darsie Jr, who said in an email that his father passed away at the age of 99 three years ago. “I know he took this photo while he was in Nepal. I have no more idea about it.”

How those in the photo were found

Republica approached Muraj Didiya at the Tourism Information Center, who guessed from the background and the clothes being worn that the photo could have been taken in Thimi, Bhaktapur district.

The photo piqued the curiosity of elderly Thimi locals. It was they who ‘confirmed’ Druba Prajapati and his kids as the faces in this image of yesteryear that the internet age has given a new lease of life to. 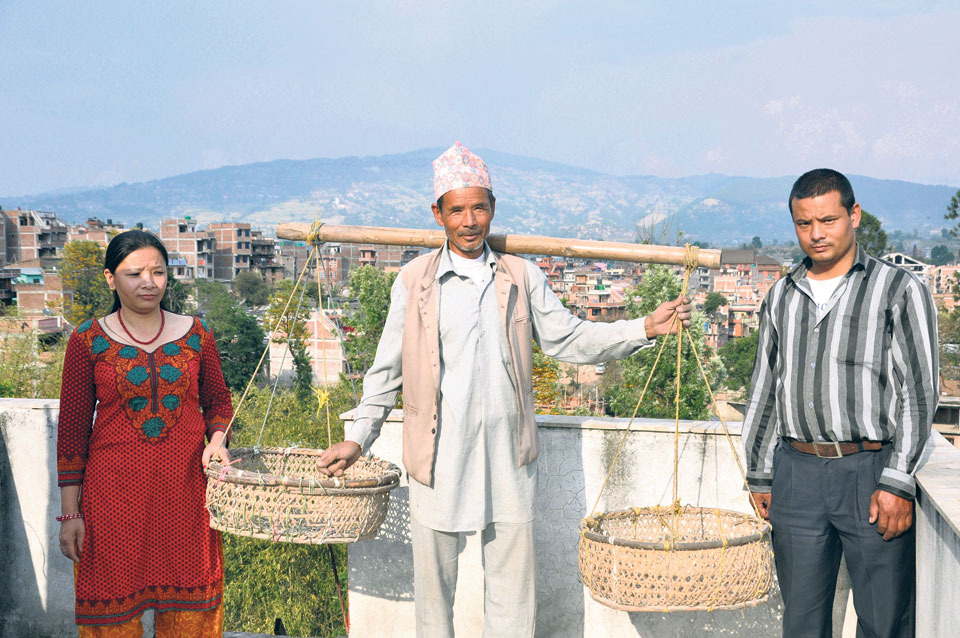