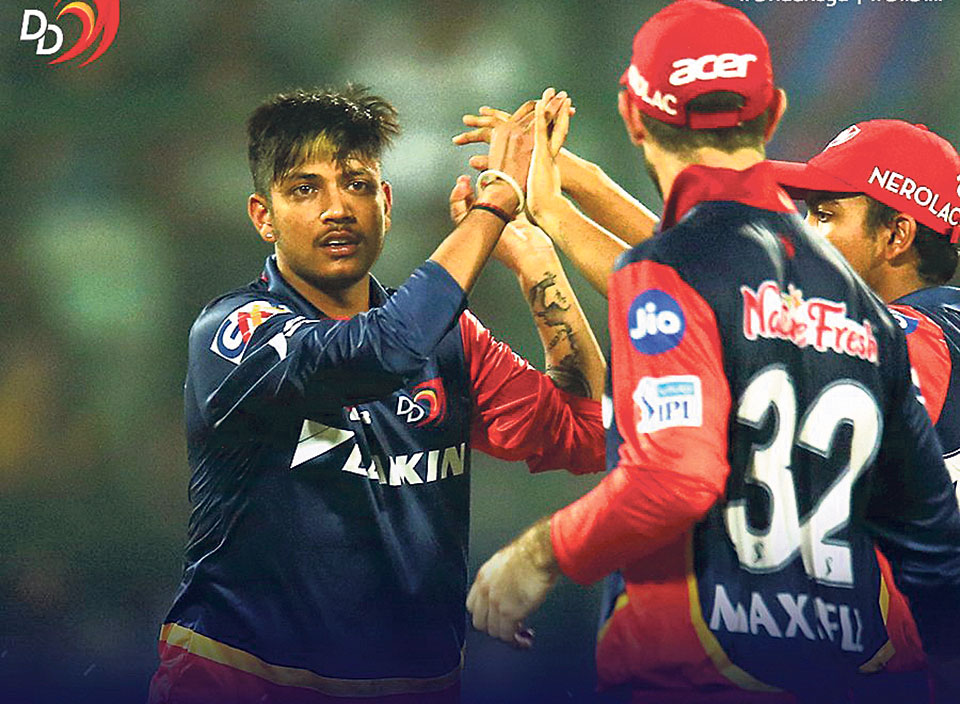 KATHMANDU, May 20: The expectations were multiplied when Sandeep Lamichhane was announced in the Delhi Daredevils playing XI for the second straight game in the match against Indian cricket legend Mahendra Singh Dhoni-led Chennai Super Kings (CSK) in the Indian Premiere League (IPL) on Friday.

Breaking the internet back in Nepal has now become a regular phenomenon every time Lamichhane dons the blue & red outfit for Daredevils. The expectations to achieve something extraordinary like dismissing Dhoni, has now become a realist belief for the cricket fans back home.

The 17-year-old leg spin sensation from Nepal completed his spell at three different juncture of the match exhibiting versatility and grown confidence as well as trust put on by his skipper Shreyas Iyer and Daredevils management. He delivered four overs conceding 21 runs and picking up the crucial wicket of Suresh Raina who has 4,870 runs in 173 IPL matches. Lamichhane conceded only one six in his 24 balls registering 10 staggering dot balls defending 163 runs. The epitome of his accuracy with the ball is not conceding any extras in two matches and eight overs so far in his IPL career bowling at proven T20 superstars like Virat Kohli, Abraham Benjamin de Villiers, Shane Watson and MS Dhoni. Daredevils won the match by 34 runs and Lamichhane was awarded with FBB Stylish player of the match receiving IRs 100,000 cash prize. He tops the ‘most economical bowler’ list of the IPL conceding just 5.75 runs per over, less than run-a-ball ahead of fellow-spinners Mujeeb Ur Rahman, Rashid Khan and teammate Amit Mishra.

Indian Premier League (IPL)’s most successful spin bowler and his teammate leg-spinner Amit Mishra was full of praises in conversation with Star Sports during post-match show. “The best part about ‘Lami’ [Sandeep Lamichhane] is his willingness to listen and learn. He keeps it simple. He executes the plans as foretold and never tries too many things which are a good disciplined sign moving forward, “said Mishra, who has 143 wickets in 135 IPL matches.

Lamichhane’s IPL performance is no less than remarkable anecdote to collective growth of cricket outside the test world as pinpointed by former England captain Michael Vaughan. “Sandeep Lamichhane is a wonderful story. His story is remarkable where he come from. He is sharing dressing room with Ricky Ponting and will be doing similar with more great names in England. He will get a great ovation,” said Michael Vaughan, England’s most successful test captain.

The stature continues to grow for wonder kid from Nepal with every outing impressing the veterans and legends of the game alike. Indian spin legends Laxman Shivaramakrishnan and Anil Kumble on the commentary panel were impressed with the critical part of his bowling action and were optimist about his improvement with more match exposure from such early age. The former world number one fast bowler Irfan Pathan from India went on to tweet the legacy of star-power and fandom Lamichhane can create will help Nepal establish its cricket in the world. “If you want a particular region & its kids to play any kind of sport, you need a hero. For Nepal and their cricket it’s Sandeep Lamichhane,” tweeted Irfan Pathan.