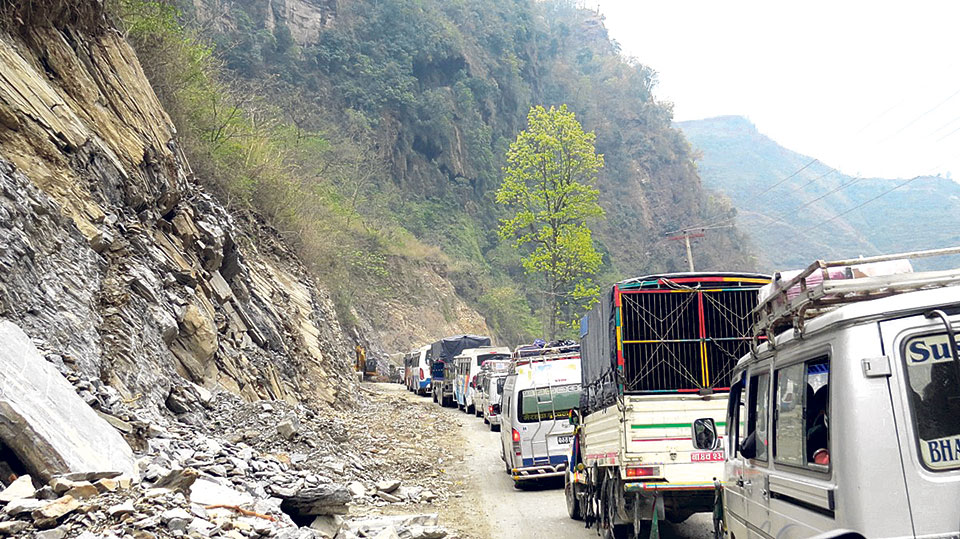 Vehicles along the landslide-prone Naryanghat Muglin road in this recent picture.

CHITWAN, May 9: In the last 10 months 97 people lost life from 195 road accidents in Chitwan. Some of these accidents occurred along the Naryanghat–Munglin road- one of the busiest highways in the country.

“The frequency of the accidents on the road and the toll from them is very alarming. It is very risky and prone to frequent accidents,” said Inspector Santosh Panta, chief of Chitwan Traffic Office. “Traffic on the highway is often obstructed by landslides and vehicles plying on it are at risk of being crushed by landslides,” he added.

Last year, landslides blocked the road for several days. Longest of this block last year was for a staggering 43 hours. In lack of arrangements for a prompt clearing of debris, vehicular moment along the road is affected frequently. According to Panta, presently also the road lacks an efficient mechanism in place to remove debris and to improve road safety measures. “The road is full of sharp bends and occasional land slide debris makes it a risky ride for vehicles,” Panta said.
During last year’s traffic jam, passengers were stuck for days and were forced to suffer from hunger and shelter. Though these issues were reported widely on national media, the construction of the road continues at a sluggish space. The widening of the road block which started three years ago has yet to conclude.

Panta further said that along with vehicles and passengers, pedestrians too have been victim of the road section’s landslides.

“Pedestrian walking along the road have also been victims of the landslides. In the last three years, eight pedestrians have been killed after being hit by landslides,” he stated. “Policemen, who were trying to recover a jeep swept away by landslide, were also killed by another landslide,” he added.
Journey across the highway becomes even riskier during the monsoon and Panta expressed concerns about it.

“Major factors that contribute to most of the accidents on the highway are over speeding, sharp bends, and landslides,” he stated. “During rainy season, there is hardly any day without landslides. Even otherwise, we see dry landslides in this road block,” he added.

Just within Baishak (the current Nepali month), Panta has seen several landslides. Even long before the drenching monsoon season, landslides are already creating menace along the highway.
“I work in this area and in my observation there have been landslides this month even when there was scanty rainfall. Now imagine how it will be when the area will be drenched by monsoon rain?” he said. Even though there are landslides in some part of the road, vehicular moment along both lanes has remained unaffected. “It was blocked for around one hour recently. Small landslides do not create serious road obstruction, but when it’s big landslide, it’s really tough to remove it and handle the traffic congestion,” Panta stated.

“Even though averting landslides might be a different thing or difficult thing, what could at least be done it to have an emergency team on standby to clear debris and resume vehicular movement as soon as a landslide is reported. However, we don’t have resources for this either. No technicians, no machines,” he lamented.

Road widening made it riskier
Accident on this road is not a new thing. However, the ongoing road widening project has made the road more prone to accidents and landslides. As part of the widening project, mountains have been fleshed and this has affected the integrity of the hills that has led to increase in the numbers of landslides.

The base remains weak due to cutting, blasting or clearing of the rocks. According to Govinda Prasad Aryal, divisional engineer of the construction project, hills have been sliced to widen the road. “To widen the road we have sliced hills and even cut down rocks along the highway. This has increased the risk of dry and wet landslides,” he said.

He informed that efforts like rock netting, bolting, anchoring and bio-engineering techniques have been applied to control landslides. “We are working on controlling the landslides. By the month of Asar, we expect to cover most of the sensitive areas by mid July,” he said.

Jalbire, Kalikhola, Chorkhola and Chepangdanda, among other areas are the most landslide prone areas along the road, Aryal said adding that around 85 percent of the road widening is completed.

Although floods are not a new phenomenon in the Tarai belt, prevention measures are hardly taken to avert or minimize... Read More...

BHIMDUTTANAGAR, July 2: As many as seven families were displaced following landslide and flash floods triggered by two days of... Read More...

Khanal demands for reelection in Ilam
14 hours ago