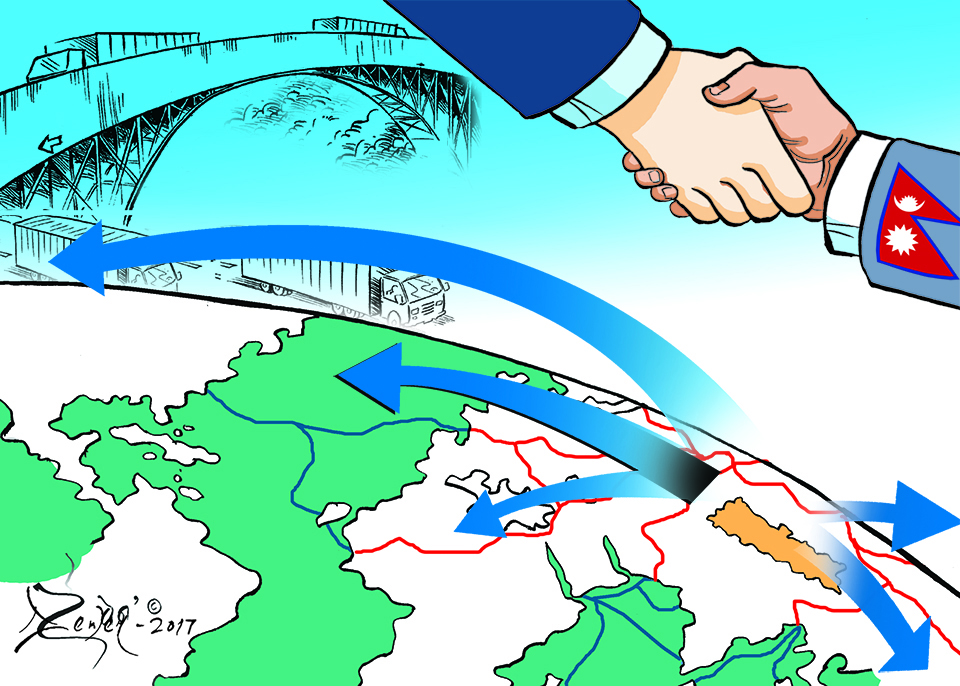 As China remains engaged in improving connectivity in the neighborhood, there is a great optimism about BRI in Nepal

At the historic 19th National Congress of Communist Party of China (CPC) last October, President Xi Jinping said: “It is time for us to take centre stage in the world and to make a greater contribution to humankind.” He had unveiled the ‘dream of the great rejuvenation of the Chinese nation’ after becoming the general secretary of CPC in 2012.  Their common message: Beijing will no longer shy away from world leadership, and will even aim to promote its economic model around the world. Belt and Road Initiative (BRI) followed these declarations.

BRI has two components. The overland belt connects China with Central Asia, Russia, South Asia and Europe. Speaking at the Nazarbayev University, Kazakhstan, on September 7, 2013, President Xi proposed to jointly build an “economic belt along the Silk Road.” He termed it as “a great undertaking benefitting the people of all countries along the route, inhabited by close to three billion people” and representing the biggest market in the world with enormous potentials for trade and investment cooperation.

A month later, on October 2, President Xi in his speech at Indonesia’s parliament talked about the Maritime Silk Road to increase connectivity and maritime cooperation linking Chinese ports with Southeast Asia, South Asia, Africa, the Middle East and Europe. The two initiatives came wrapped in a BRI package.  The choice of the venues for announcement carries a lot of significance politically, economically and strategically.

In a key note speech at the opening ceremony of BRI Forum for International Cooperation entitled “Work Together to Build the Silk Road Economic Belt and the 21st Century Maritime Silk Road” on May 14, 2017,  in Beijing, President Xi called BRI a “project of the century.”  Terming BRI a heritage of human civilization, he underlined the peace and cooperation, openness and inclusiveness, mutual learning and mutual benefit embedded in Silk Road spirit.

BRI is a massive infrastructure plan that envisions a vast network of railways, highways, ports, pipelines and communication infrastructures spanning the Eurasian continent linking 60 countries along with provinces in China’s frontier regions.  It aims at facilitating trade, investment and people to people contacts among others. It is expected to drive the economic development of developing and least developed countries along the road. BRI is said to have inaugurated the next phase of globalization promising “a new foundation for shared global growth, a reverse of the past in which the developed world was the focus of global engine.”

In early 2014, the government of Sushil Koirala welcomed BRI and expressed desire to work in close cooperation with China towards enhancing more connectivity and integration. Following up on that, Nepal signed a Memorandum of Understanding on Framework Agreement in Kathmandu, officially making it a part of the initiative in May, 2017.  Deputy Prime Minister and Finance Minister Krishna Bahadur Mahara led the Nepali delegation to BRI summit.

In his recent visit to China, Foreign Minister Pradeep Gyawali termed BRI as a revival and rejuvenation of cultural and commercial exchanges between Nepal and China. He has expressed the pride of Nepal to work together with China in this historic mission for greater peace, prosperity and harmony.

A policy document issued by Chinese government in March 2015, mentions Nepal in the context of promoting “the border trade and tourism and cultural cooperation between Tibet Autonomous Region and neighboring countries such as Nepal.”

Implementation is easier said than done.  BRI has sparked a variety of responses from governments, commentators and analysts.  Countries—including some ASEAN members, United States, Japan and India—appear divided as to whether they should participate in BRI.  They are suspicious over China’s real intentions.  India says BRI ignores its “core concerns on sovereignty and territorial integrity,” and gives rise to “unnecessary competitiveness”.  EU seems willing to participate for “shaping the outcome from within.” Recently Japan mentioned the prospect of cooperation on a case-by-case basis for projects that “firmly match the international standards of transparency, openness, the soundness of the project and the fiscal soundness of the country accepting the financing, and environmental and social factors.”

Under BRI, China will spend billions of dollars to build ports, pipelines, roads and telecommunication facilities across the countries that have joined BRI. Analysts see it as a strategy “with a clear set of ends, ways and means, to be evaluated on its ability to support China’s geopolitical objectives.”

Having locked in his political dominance in National Congress and having enshrined “Xi Jinping Thought on Socialism with Chinese Characteristics for a New Era” in the party’s constitution, President Xi’s next move will be to secure the country’s economic future and use strategic opportunity abroad.

His real test is how he uses his huge political capital for realization of ‘China Dream’ to “benefit the people of the world.”  Success calls for an inclusive approach. This will depend on how soon political and strategic trust of dissonant countries is earned, detailed contents of BRI unveiled and terms of Asia Infrastructure Investment Bank and new Silk Road Fund revealed.

During his speech at the 19th National Congress, President Xi recommended other countries to draw on ‘Chinese wisdom and follow a Chinese approach to solving the problems facing the mankind.’  This brings the governance model at the front and center of foreign policy. BRI is a major theme of Chinese foreign policy containing both hard and soft connectivity and linking distant frontiers in China to the heartland with highways, railroads, ports and pipelines stretching to the Eurasian landmass.

China is investing and sending its people to security-sensitive and terrorist infected places. Given the geographic scale of BRI, it is bound to confront complex geopolitics.

Though much has been written and discussed and over 100 countries and international organizations have supported the initiative, BRI is still evolving. As China remains engaged in improving connectivity in the neighborhood, there is a great optimism about BRI in Nepal. Infrastructure development is key to progress and prosperity.  It is, therefore, necessary to think holistically and work comprehensively to strengthen national institutions and enhance productive capacity. One-way traffic is no win-win cooperation.

War is no option for India and China: Chinese scholars

There is a popular saying that a teacher affects eternity; you can never tell where their influence stops. And if... Read More...