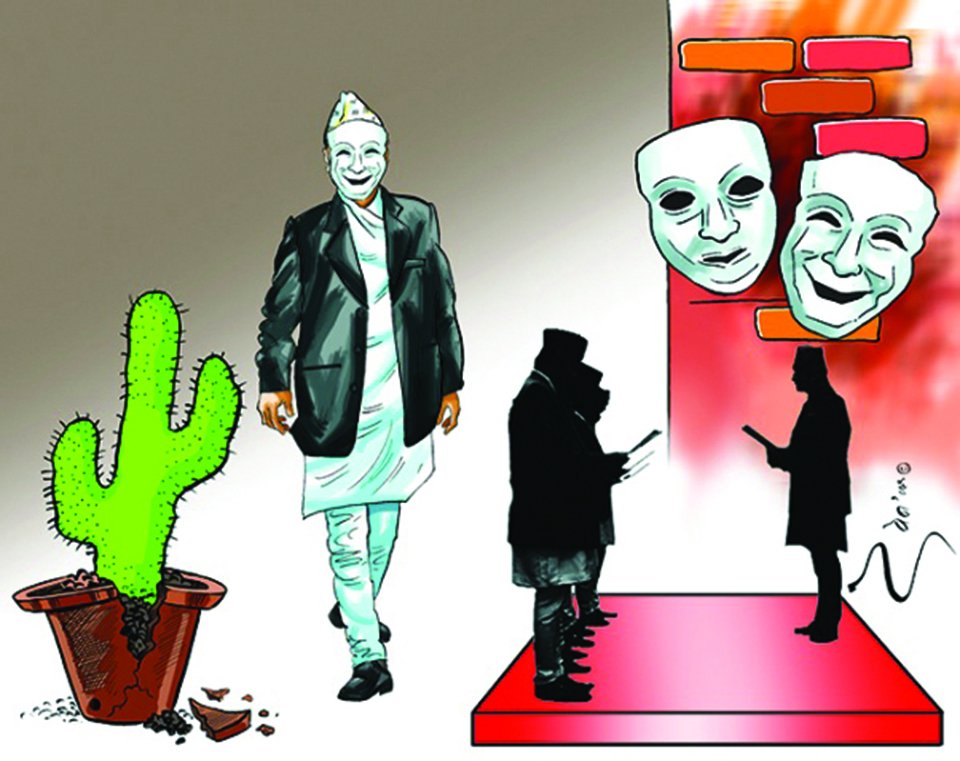 During the multiparty democratic dispensation, corruption got democratized. In federal democratic republic Nepal, corruption seems to have become institutionalized

With Prime Minister K P Sharma Oli and his ministers making pledges that they will neither indulge in corruption nor tolerate anybody doing so, the government declaring zero tolerance against corruption and the PM himself taking direct control over some anticorruption agencies (hitherto left with the line ministries), it sounds like the government is committed to good governance and corruption control. But these promises do not match with performance. Few days back the PM nearly wrought havoc by speaking about legitimizing black money. In the recently published White Paper, the word “corruption” literally appeared only once (on page three). What is the point in making elaborated justifications for “empty state coffer” if you cannot spell out the word corruption?

There are two flaws in government’s mission in eradicating corruption. First, corruption can be reduced, it cannot be eliminated. Therefore, the zero tolerance against corruption is nothing more than a glib for public consumption. Second and more importantly, in a democratic system, anti-corruption often becomes the agenda of the opponents, not that of the political parties in power.

When the government speaks of anti-corruption, something definitely must be happening behind the scene. Corruption, and for that matter anti-corruption, is a double-edged sword. It can be used to defend oneself or conveniently used to gag the opponents. Remember what former King Gyanendra did with his Royal Commission for Corruption Control (RCCC)? Utmost public vigilance is required to fight corruption.

Corruption becomes a means as well as an end in itself. The government’s effort to score three-fourth majority in the House is nothing more than an expression of that desire to institutionalize corruption. With the absolute majority it can literally hang a Damocles’ sword (read impeachment motion) over the heads of constitutional bodies and attain complete state capture. Therefore, the shape of corruption to emerge in the days ahead will be markedly different from the one we experienced during Congressi regime. If Congressi corruption was open, disorganized and market based (monetized) communist corruption will be closed, organized, and parochial and intensively nepotism based.

Once a journo had remarked that prefix “nep” in Nepal is meant to reflect our culture of nepotism (and favoritism). The present government is poised to prove this hypothesis.

Controlling corruption is easier said than done. It is because when you fight corruption, it fights back. The government’s commitment is an easier part. Harder part is yet to come.

Controlling corruption or cleaning the country is very much similar to the way we clean our houses. When we start cleaning our houses, normally we begin from the point from where the stink is coming or look for the dirtiest corners. Invariably, such places would be our toilets, kitchens, staircases, window panes, drawing rooms, ceilings and roof tops.

Based on my personal experiences and the analogy I mentioned above, I list here five Augean stables for the Oli government to start cleaning business.

Corruption in security forces: The number one agenda should be sanitizing our security forces. One does not need to be an economist to understand why Nepal has lagged behind in development. Ask a school going kid: What is necessary for Nepal’s development? Answers will be one or both of these: (a) a large pool of army, police and armed police forces (b) school teachers? Pay heed to this and you will not only get answers to your question but also find where the country is heading towards.

With the police heads regularly charged of big scale corruption crimes one can fairly assume the scale of corruption in police force. What about Nepal Army? Simply because it is beyond the purview of CIAA investigation does not imply it is integral. A simple investigation on the utilization of Rs 40 billion funds with Nepal Army Welfare Fund can trigger whole process of sanitizing Nepal Army. We should note that the Maoists are singularly responsible for bringing the army to this state. First, their insurgency pushed the army to double its size.

Second, in the name of peace process, they did nothing to downsize army. They have even stopped talking about democratization and civilian control of army.

Corruption in foreign employment sector: The next stinking area probably will be our foreign employment business. First, we need to stop glorifying remittance based economy and come down to the reality that things are in chaos in this sector. The poor and destitute youths are being cheated before, during and after they go for foreign employment. My own conservative estimate of 2010 shows Rs 17 billion is draining out of this sector every year. We have even politicized this sector. Congress supporters go to Gulf countries, Maoists to Malaysia and UML supporters to South Korea.

Public procurement and construction works: The third priority area will be controlling “commissions” in the businesses of public procurement and construction works. The Nepali words thekka, thekkedari (contract and contractors) are synonym for corruption. Introduction of e-procurement has done little in controlling musclemen. The sector is entrenched in nefarious networks and breeding organized crimes. It is no wonder that we have more than one-third provincial MPs with thekedari background.

Illicit financing and money laundering: If above three areas of corruption are located within the country, this sector has a direct link with outside the country. In 2017, the Basel Institute of Governance, Switzerland has ranked Nepal at 14th position, out of 146 countries of the world, in its anti-money laundering index.

One can fairly imagine the scale of the problem. Media is keeping a tab on how Ajaya Sumargi is bringing in billions of forex into the country but no one is taking stock of scale of capital flights from the country. The Nepal Trust which is expected to investigate on the property held by the deceased royal family members has so far come up with no result other than finding a plot of land, now and then, here and there. Please note the land does not move out of the country.

Party financing: This sector would have come at the top if we had not completed series of elections. As next rounds of elections are due only after five years, I list this sector at fifth position. If political parties are headquarters of corruption in Nepal then political party financing is the master bedroom. Communist parties, including smaller ones, are the richest political parties in Nepal. The government, so much abrasive of EU elections monitoring report, has not spared a single word on its accusations of vote buying behaviour.

Above list can be stretched to include medical/educational mafia, transport syndicate or private sector corruption in general, but these are big five areas that demands immediate attention. The readers may be wondering why I did not spell out anything on daily bribery cases related to acquiring lalpurja (land ownership certificate), nagarikta (citizenship certificate), driving licence, passport, permits and other public and judicial services. Compared to the five lists above, they amount to petty corruption.

This is not to imply that we should not worry about petty corruption. There is an intense debate over frying small vs big fishes. Let me end here with a quote from the former Chairperson of Transparency International, Jose Ugaz: “The issue here is not of big vs small fishes. If your kitchen is ready, if your pan and oil is properly heated then you start frying fishes.” Let us see what KP is cooking in his kitchen cabinet.