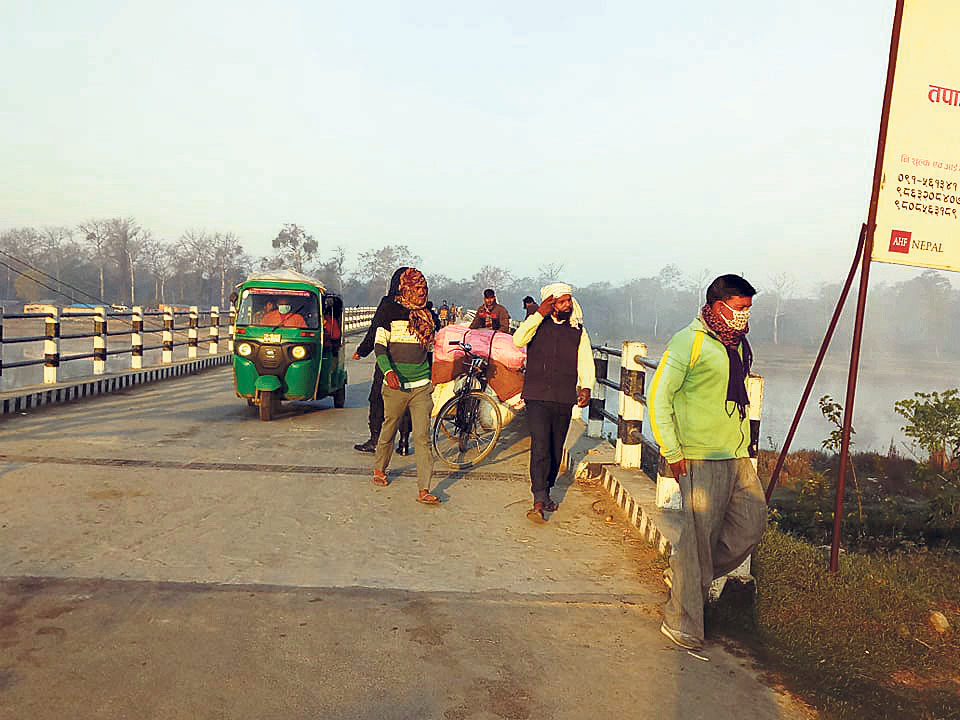 KATHMANDU, March 23: Nepali district authorities have closed border points with India after coronavirus cases and deaths rise in India. The administrations of the districts bordering India temporarily sealed the border points from Sunday morning after thousands of people entered Nepal from coronavirus-affected Indian cities on Saturday. They were alarmed after cases of the deadly virus have been rising in India in recent days.

Administrators in the districts were briefed by officials that along with Nepalis working in various Indian cities, Indians are also entering Nepal hoping that they would be safe here.

Till Sunday evening, seven persons have died of coronaviurs in India, which shares a 1,800 km open border with Nepal. More than 300 cases coronavirus infection have been reported there.

In Banke, the district administration has sealed the Rupaidiha border point for a week. The border was closed from 11 am on Sunday.

“During this period, cross-border movement has been restricted,” Kumar Bahadur Khadka, chief district officer in the district informed after the border closure.

The decision to close the border, according to Khadka, was taken in line with the instruction from the federal government.  The import and export of daily essentials, however, will be continued.

At a time when COVID-19 is spreading in various parts of India, Nepali nationals who are there for employment and treatment purposes have been returning to Nepal via Rupaidiha. Along with Nepalis, Indians are also flocking to the Nepali side, according to border officials. Keeping in mind the influx of Nepali and Indian nationals to Nepal, the local people were demanding that Nepal close the border without any delay.

In Sudur Paschim Province, Gaddachauki border point of Kanchanpur has been closed. Kanchanpur District Administration Office has declared a curfew in the district headquarters requesting the general public not to go out of home. The curfew will be effective from Sunday midnight.

Kanchanpur CDO Nurhari Khatiwada has ordered the local authorities to close shops other than those selling essentials—foodstuffs, water, medicine, petroleum products and -- stoppage of work other than those related to relief and rescue operations.

Businesses and factories will remain closed and the general public will not be allowed to venture out of their homes unless absolutely necessary, said CDO Khatiwada.

In province 5, the Rupandehi District Administration has closed the Belahiya border until further notice. The border point wore a deserted look Sunday following the closure. Belahiya is a key border point.

Indian villages bordering Nepal were quiet on Sunday due to a public curfew announced by the government. Indian authorities had declared a day-long “Janata Curfew”.

But trucks carrying goods and supplies are entering and exiting the border without any restrictions. The drivers and staffers of the cargo vehicles are allowed to enter Nepal only after medical screening.

“The border has been sealed to keep Rupandehi safe from the coronavirus pandemic,” said Mahadev Pantha, chief district officer of Rupandehi.

Long-haul bus service has been suspended in Rupandehi.

Government offices were open to deliver emergency services. Public spaces such as movie theaters and recreation centers and public gatherings have been banned in the district.

Likewise, the Dang district administration has closed all 26 border points with India from Sunday.

Shortly after the closure decision more than 150 people who were entering Nepal Sunday were sent back to India. Health desks have been established in the district.

“We have taken precautionary measures on coronavirus fears. Medical camps are also set up along the border points for health check up,” said Dang CDO Gobinda Rijal.

6000 APF deployed along Nepal-India border amid fear of coronavirus

KATHMANDU, April 13: Amid fears of spread of COVID-19 in Nepal, the government has deployed 6000 Armed Police Force (APF)... Read More...