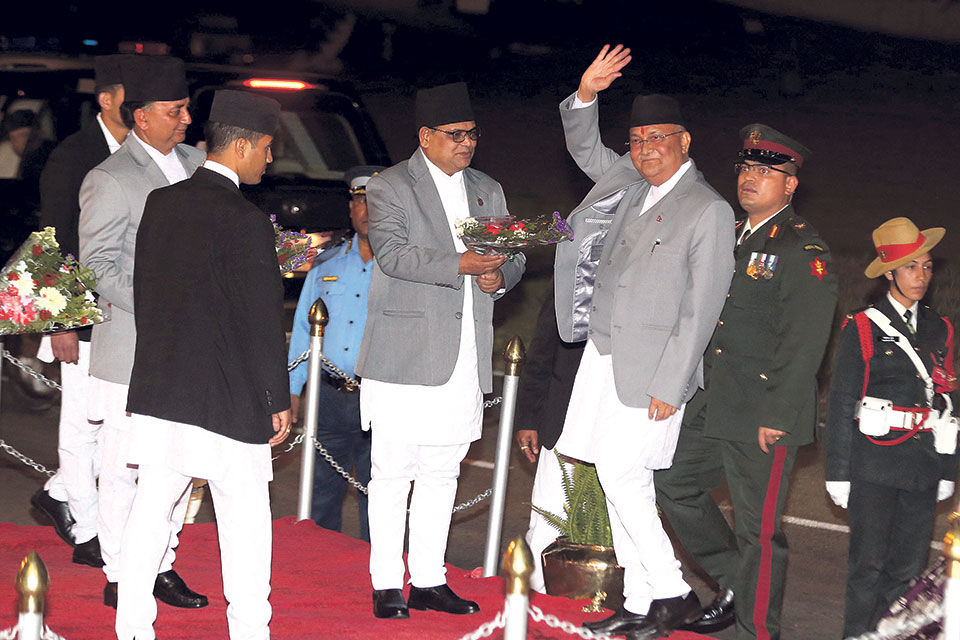 KATHMANDU, April 9:   Was Prime Minister KP Oli’s India visit a success or was it just an addition to ritual junkets led by past ten Nepali prime ministers in as many years?

This is a question that many were asking as Prime Minister Oli returned home on Sunday concluding a three-day state visit to India.

Upon his arrival at the Tribhuvan International Airport in the evening, Oli told media persons that his visit to India was fruitful in achieving the desired goals.

“The visit went ahead in a realistic and fruitful manner. I went to India representing our democratic values (expressed in the elections), India welcomed it,” Oli told reporters, adding that the pictures emerging from the meetings were its testimony.

Talking to media persons on Saturday, Foreign Minister Pradeep Gyawali had described the visit as successful and historic, claiming that the visit had taken Nepal-India relations to a new height.

While it might be too early to tell whether the visit will help in cementing the bilateral ties that was at a historic low following the Indian blockade of 2015, Oli’s visit was certainly an important step forward in increasing connectivity between Nepal and India, say critics.  They said that agreements reached between India and Nepal on connectivity will be a milestone in enhancing people-to-people relations and accelerating economic growth.

On Saturday, India had agreed to give Nepal an increased access to sea through inland waterways and develop “an electrified railway line” connecting Kathmandu with Raxual of Bihar. The agreement on inland waterways and the railway line, which comes two years after China agreed to construct railway connecting Kerung of Tibet with Kathmandu, Pokhara and Lumbini, has been seen as India’s counter to the Chinese railway.
Following a meeting between Oli and Indian Prime Minister Narendra Modi, officials from the two countries had also signed a memorandum of understanding (MoU) on bilateral cooperation in the development and promotion of agricultural sector through exchange of knowledge and technology. The two sides had also agreed to expedite some pending projects.

But Oli’s visit has been criticized for failing to raise the issues of national importance during the bilateral discussions. Critics say that Oli’s visit, in content, was no different from past India visits of ten of the eleven prime ministers who came to power since Nepal became a federal republic in 2008. Except for UML leader Jhala Nath Khanal, all prime ministers who came to power post political change of 2006 had visited India.
Leaders of the opposition parties say Oli had deliberately downplayed the issue of border disputes, land encroachment and trade deficit under the pretext of mending ties with India.

A 12-point joint communiqué issued after the meeting between the prime ministers of Nepal and India did not touch upon the topics like trade deficit, cross-border disputes and several pending agreements including Pancheshwar and Tanakpur.

Former Prime Minister Baburam Bhattarai has welcomed the accords on railway line and inland waterways as positive achievement while stressing on their timely implementation.

Many were expecting that Oli, who leads one of the most powerful governments in recent history, would make land dispute and implementation of pending projects the main agenda during the bilateral discussions.  But Oli said the issues were raised, adding that all discussed issues could not be incorporated in the joint statement due to lack of intensive discussions.

“There has been positive development on all issues (relating to bilateral relations) though some issues were mentioned in writing. There is a need for extensive discussion over these issues,” said Oli.