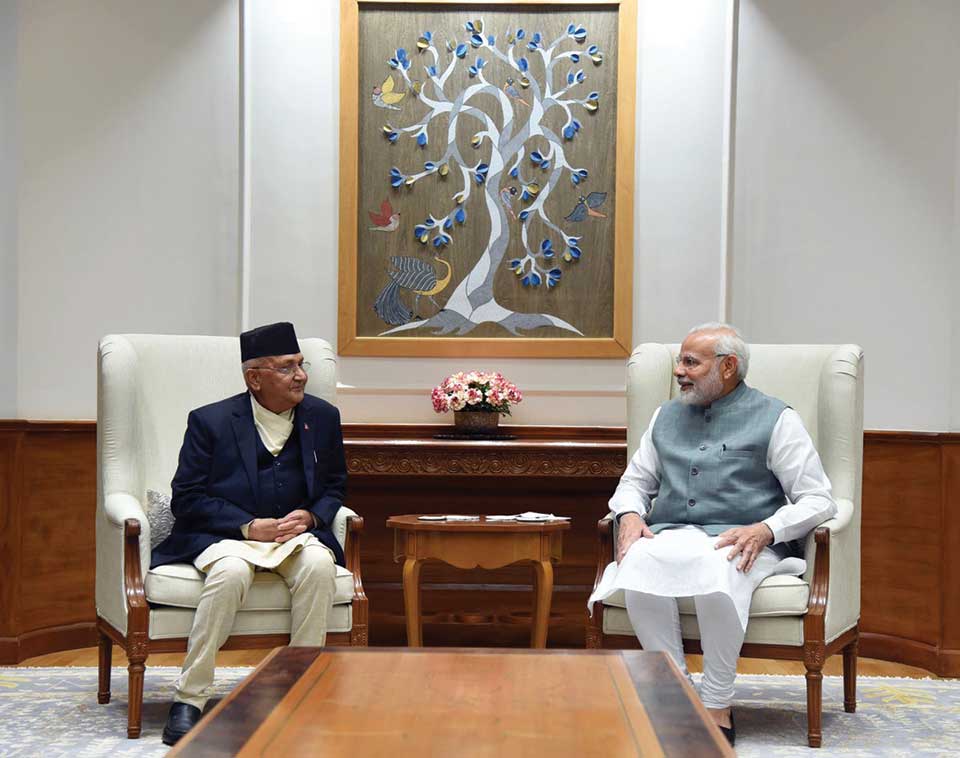 The visit of Prime Minister K P Sharma Oli to New Delhi has created a lot of buzz raising hope of ‘restoring’ national pride and some suspicion as to whether the trip will be one of those running around the mill. Commentaries and expert opinions flooded both newspapers and airtime of both televisions and radios. The narrative built around the visit—both in the run-up to and when visit actualized—is interesting.

A careful observation of these commentaries indicates a very little difference of opinion with every other visit. This visit by Prime Minister Oli was given much hype by the mainstream press, including  ‘experts’,  and was touted as a visit by a very powerful premier with some comparisons running with the first elected Prime Minister BP Koirala.

The intention of this piece is to decipher why and how such narratives are built wherein there is a disproportionate focus on the process and not on the result.

Humiliating treatment meted
out to migrants
on both sides of the border finds scanty mention in larger discourse.

Of course, results in diplomacy are both short and long-term. But, a look at the visits to the southern neighbor by both heads of state and government of Nepal following the declaration of republic suggests it is nothing more than making a courtesy call to the most important external benefactor of Nepali state.

Nepali hype
The hype around visit to India by Nepali actors is a telling point about not just the capacity and the allied factors of the bureaucratic state, but also of the psychological condition of the actor involved. For instance, the unofficial blockade imposed by India has actually boosted the ego of Nepali elite, both traditional and modern, and was reflected in the landslide victory to the ruling CPN-UML in the latest parliamentary elections which among others was contested on nationalist (read anti-India) plank.

The ability to deal with India has been an important source of legitimacy of both bureaucratic state and political actors. Therefore, the Nepali public often equates the ability of the actor with that of the state. This often creates da ilemma in the mind of the politician who has to placate his/her domestic constituency and negotiate with the external benefactor at the same time. The rhetoric by every visiting premier including the incumbent is the result of this dilemma.

The rhetoric and politics around the treaty of 1950 is a good pointer on this. Every prime minster, especially from the left background, has called for revising the treaty at home. But, when it comes to actualizing it, the historical forces that govern the relationship seem to put the issue on back burner.

The authors stress this point even as the there is a group of eminent persons from both countries to rework the treaty, whose recommendations will not be binding on both states.

Surprisingly, important opinion makers, including the press, seem to fall into this trap and support, tacitly or explicitly, rhetoric and narratives of politicians. The key element to keep the narratives afloat is the overwhelming focus on the process.

Concerned stakeholders especially on the Nepali side try to give as much information as possible on how the visit is planned and the decorative importance accorded to the visit by Indian side, most prominently as to who will receive the visiting Nepali dignitary and the body language of the Nepali visiting delegate with that of his/her Indian counterpart.
Of course these nuances are important. But more important are the outcomes and the strategies employed by the Nepali state and the actors to achieve both short and long term goals.

Realigning the focus
Focus of the narratives on the visit should, therefore, be on how to secure mutual as well as an individual state interest. Since the track two approaches have the capacity to create an environment for states to interact on plausible grounds, Nepal-India relations would be no exception to this.

Encouraging these interactions, especially at an academic level, would help build narratives that can offer alternative perspectives. The press and other spaces which are vital in building these narratives in Nepal need to focus here so as to promote and enhance productive outcomes like giving more spaces to opinions of varied Indian academicians and opinion makers who can have influential clout in Delhi. Thus building not just narratives, but also creating important conduits to deal with the relationship.
Narratives often involve diverse and competing actors. This relationship is no exception.

The Nepali press is full of narratives emanating from Delhi and Kathmandu, giving it an elitist tone. But, Nepal-India relationship is not acted out in the capitals alone. Both the irritants and strength of this relationship are built and exist at the cross border level on an everyday basis.

The humiliating act meted out to the migrants (both Nepali and Indians) on both sides of the border is the most telling narrative which finds scanty mention in the larger discourse on bilateral relations. Also, creating a win-win situation for small traders on both sides would add a small but important stone toward smoothening the relationship. A case in point is Nepali ginger farmers who often face hurdle in exporting their products to India.

The fact that these ‘small’ events actually create pent up frustrations which actually affect relations at political level can no longer be ignored.

The narrative behind the viral photo of a polar bear starving, reportedly thanks to climate change, has been called into... Read More...

With much of Europe surrounded by illiberal forces, the EU has been left alone to defend what remains of the... Read More...