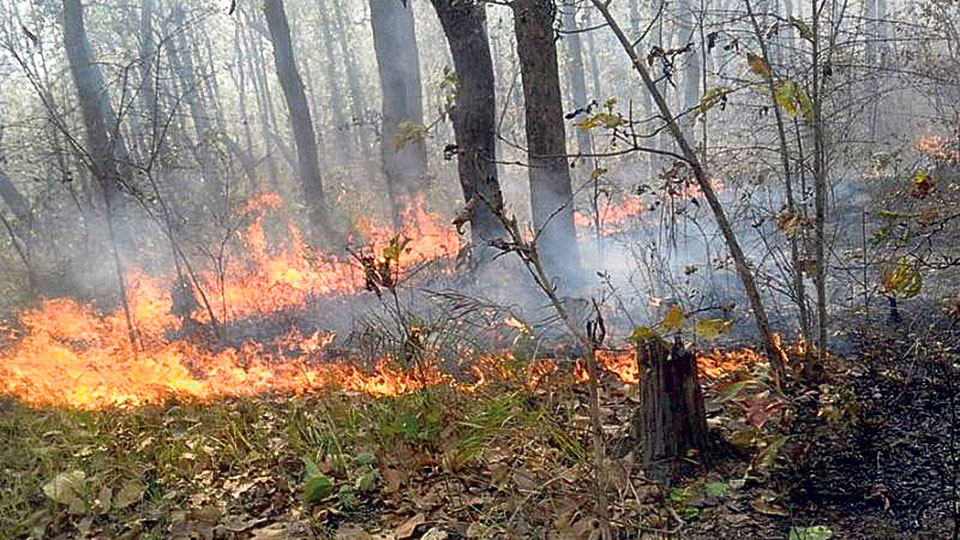 A fire spreading through a community forest in the Chure area in Udayapur district in this recent photo. Photo: Maheshwar Chamling Rai/Republica

UDAYAPUR, March 26: Of late, thousands of hectares of forest along the Chure Range in Udayapur district have been destroyed by forest fires. Community forests in the eastern side of the district are the most affected.

According to locals, over 10,000 hectares of forest have been destroyed by fire in the past seven days alone. Fire has destroyed most of the forest along the Laighat-Kadmaha road section along the Chure Range.

“Those forests are the same ones for which manpower and budget were allocated under the President Chure Tarai Madhes Program,” said Sushil Rai, a local. “Forest fire destroyed much of the forests from Wednesday to Saturday. However, no one tried to douse the fire.”

Community forests in the north of the district headquarters, including Babari, Jalpadevi, Nawaudaya, Chappan and Hariyali among others have been destroyed by the fires.

“When I saw the forest on Saturday, there still were greeneries. However, the next day many parts of the forests were destroyed by fire,” added Rai. Locals said that hundreds of hectares of forest in Katari Municipality ward 1, 6 and 7 have already been destroyed by fires.

Mayor Gyanendra Shrestha of Katari Municipality also acknowledged the impact of forest fire in the region. “In areas where fire brigades can reach, fires have been taken under control. However, the sector forest offices did not try to douse the fire in their areas inaccessible for fire brigade,” said the mayor.

Mayor Shrestha also urged the locals to stay alert stating that there is a high risk of forest fires spreading to the settlements as well.

Assistant Forest Officer Jageshwar Shah said forest fires have become uncontrolled after the rise in temperature and strong winds. “Although we have received reports of forest fires from many areas, we are yet to determine how many hectares of forest have been affected,” he said.

Udayapur has been losing lots of forest areas to unchecked smuggling and fires despite calls from the local communities to take concrete measures to protect the forests.

KATHMANDU, April 5: Fire has broken out in 2,303 hectares of forest area across the country with the onset of... Read More...

Wildfire destroys over 10,000 hectares of forest in Kanchanpur

BHAKTAPUR, Nov 16: A fire that broke out at a plastic factory at Changu Narayan-4 in Bhaktapur district on Tuesday... Read More...

UML General Convention: Voting begins at 4 AM
28 minutes ago