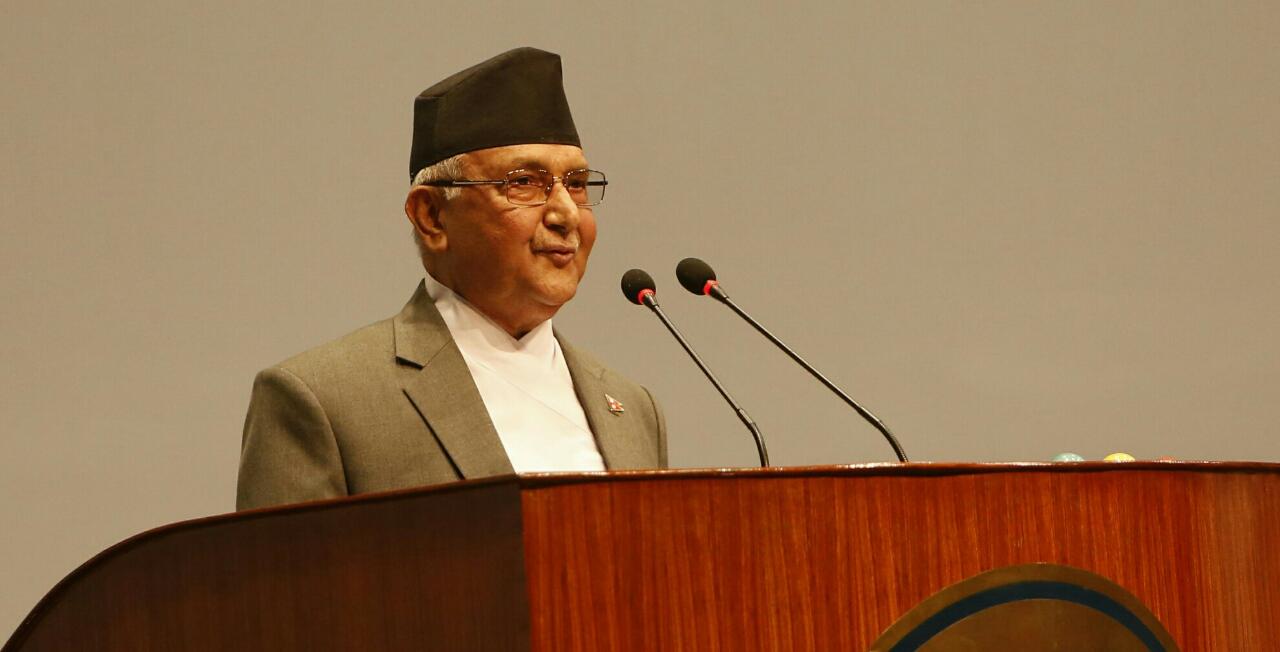 No matter how strong, Oli government must follow constitution, rule of law and democratic processes, which together shape a just and stable society

The year 2017 will go down in Nepal’s history as one of the most important years for democratic exercises. The CPN-UML and the Maoist Center emerged victorious in all three levels—federal, provincial and local—of elections. They were able to cash in on agendas of ‘stability and prosperity’ through the electoral alliances and won with thumping majority. After securing three-fourth majority in the House of Representatives (HoR), Prime Minister Khadga Prasad Oli has become one of the most powerful prime ministers in recent political history of Nepal. The last time we had such a powerful government was in 1959 when Nepali Congress under B P Koirala won two third majorities and formed the powerful government, which could not last for more than a year due to royal coup of 1960.

Having joined hands with Maoist Center and taking Sanghiya Samajbadi Forum (SSF) and Rastriya Janata Party Nepal (RJPN) on board, Oli has formed governments in six out of seven provinces, thus dominating politics nationwide. With this, Oli’s government is at an advantage of making any kind of political decisions that would require two-thirds majority support. There are no obstacles in terms of public mandate. Given the current political makeup, majority government in Nepal can either materialize promise of stability and harmony or could become a threat of impending political disaster. This is because very idea of majority rule does not completely hold true in modern democratic system for many reasons.

The classical idea of majority rule put forth by Aristotle had at its core the concept of poor citizens, who outnumber the rich, forming the government in Greek city-states. This idea of the upsurge of poor for the conduction of politics has been left far behind. Majority governments today are widely the outcome of power-sharing agreements. When this power nexus breaks majority governments fail. This very characteristic poses a major challenge for stability.

The two thirds majority acquired by CPN-UML government undoubtedly is a good opportunity to wipe out past ills and shape a better future. With protracted political instability and transition after the 2006 political change, governments in Nepal did not last for more than a year or so. In the absence of a stable government, Nepal went through a decade long political and economic mishaps.  For this matter, the absolute majority by the current government to rule for full five years is particularly good for the future of the country. People have also pinned high hopes and expectations on this government. There is a feeling among people that journey to stability and development has finally begun. The government can now utilize the mandate to materialize its agenda of ‘stability, prosperity and development.’ Moreover, because of centralization of power, the government can take action against wrong-doers which the past regimes were unable to do in many respects.

On the other hand, emergence of Oli as an all powerful premier does not necessarily give us complete liberty to be at ease. As the political thinkers have maintained ‘power tends to corrupt and absolute power corrupts absolutely.’ So we need to be observant of dangers that could be laid down on democracy by majority rule. Anxieties are already there. Oli government, which now has governments at local, provincial and central levels, has placed its representatives in key constitutional bodies for the next five years.

Besides, the government has also decided to bring powerful state agencies such as Department of Anti-Money Laundering, National Investigation Department, Social Welfare Council, Department of Revenue Investigation, under purview of Prime Minister’s Office.
Perhaps this decision was taken to combat pervasive corruption and irregularities in these institutions, but this gives Oli sweeping powers. He needs to be warned not to use this power to abet corruption, nepotism and partisan preferences.

In such situation, opposition party must work as a powerful watchdog. Opposition parties play a very significant role in a democracy as preventive antidote to governmental slackness and complacence. A strong opposition questions the government of the day and holds it accountable to people.  With Oli’s majority government in power for five years, role of Nepali Congress has become even more demanding and critical.

NC should break free from existing anti-government mindset and keep eyes on every wrong action of the government. NC should stand as a constructive opposition by proposing alternative political strategy. It can be a responsible opposition by guaranteeing transparent and accountable government that serves the public interest and avoid the majority from being tempted in conducting policies that interfere with people’s mandate and interest. For that, it should be observant of the plans, programs policies and roadmap of the communist government. Only by doing so can Nepali Congress keep the spirit of democracy alive and reclaim its lost glory. The big question today is whether NC will be able to fulfill this duty.

It is through mutual accommodation between ruling party and opposition parties that country can actually achieve stability. The government which has promised “rapid development and economic prosperity” must ensure that it takes all forces, including opposition party, into confidence to achieve that goal.

The foremost challenge for Oli’s government is to dispel all suspicions by working in the best interest of people and the country. They should also be mindful of the fact that engagement in any kind of move to consolidate power by undermining democratic institutions will further raise suspicion and mistrust. The three-fourths majority must be utilized for the good of the country and its citizens. No matter how strong, Oli government must follow constitution, rule of law and democratic processes, which together shape a just and stable society.

The author teaches at Department of Conflict, Peace and Development Studies, Tribhuvan University