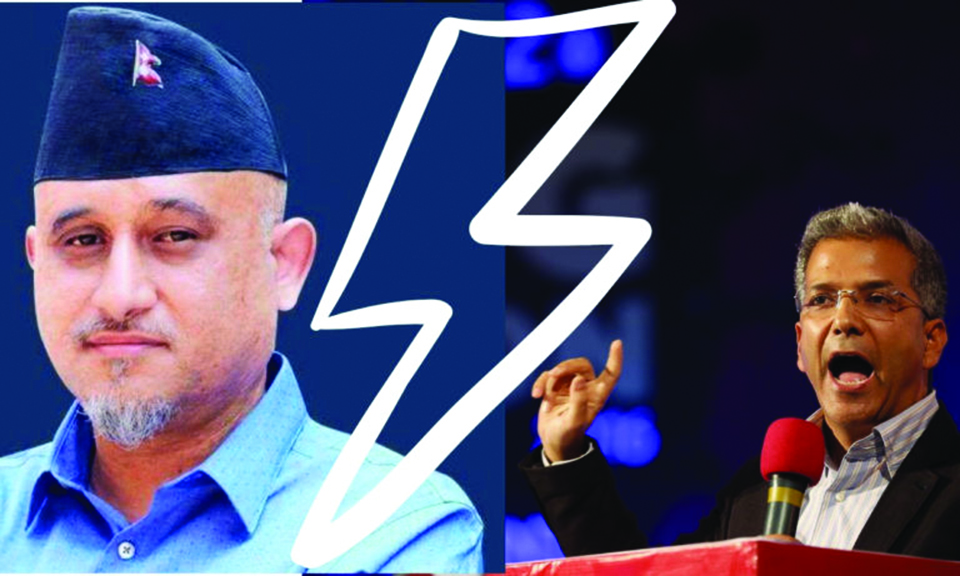 Enthusiasm and expectation abound particularly among youths when some political forces pledge to become alternative democratic forces. With the agenda to challenge traditional political parties,  Bibeksheel Nepali Dal, Sajha Party, and Naya Shakti came into being with an  objective of galvanizing Nepali youth into a single rope  in order to combat hegemony of old political parties, initiate a new political culture of accountability, and take the country out of whirlwind of political instability and shackles of poverty.

With the same goal, Bibeksheel Nepali Dal and Sajha Party came together and merged as Bibeksheel Sajha Party prior to the federal and provincial elections of 2017. The party also succeeded in sending three of its members to Provincial Assemblies.  But within less than two years of its formation, the ‘alternative political force’ of the country broke down. Bibeksheel Sajha Party is now two political entities—Bibeksheel Nepali Dal and Bibeksheel Sajha. The split is unfortunate not just for the party but also for those who looked up to the unified party with high hopes and thought of it as an organization capable of challenging the status quo and usher in new visions and culture in Nepali politics.

Split of Bibeksheel Sajha Party Nepal is concerning because its leaders had vowed to become different from the rest of the political parties. So why do political parties, old and new alike, are not able to stand united? Why cannot they adhere to basic principle of party politics?  Does Nepal lack the culture party politics requires? And is Nepal not yet ready for an alternative political force?

The foremost reason behind erosion in political parties that we have been witnessing is the lack of commitment to political agenda and political roadmap which they themselves have developed.  Second, political leaders are not clear why they are in politics. Are they in it to serve the country and people or serve themselves?

Many cite ideological differences as main cause of split. This is only partly true. It’s natural among leaders within the political parties to have differing views but this alone does not break the party if the leaders are truly committed to the nation and people. When parties and leaders have divided loyalties they certainly split. This applies in case of recent split of Bibeksheel Sajha Party as well.

There is complete mismatch between behavior and belief of political leaders in Nepal. Behavior of political parties is largely influenced by the self-interest, which is why they split. Splits happen also due to tendency of creating personal space in the party. This tendency does not allow consolidation of a political party.  As a result, political parties not just fail to live up to their own promises but also fail in strengthening their institutional base.

Ruling Nepal Communist Party is an example. It rose to power after winning the two-thirds majority support. But what is it doing now? Selling dreams but not fulfilling any of its promises. Reportedly the party is already divided along erstwhile Maoist and UML factions.

The more institutionalized a party is the better it can project a higher degree of organization and thereby maintain internal stability. The concept of institutionalization in this regard comprises different components such as societal roots, the level of organization, internal coherence, and autonomy. In Nepal, all these conditions seem to be in the nascent stage.

Here we might argue that political parties like Nepali Congress and UML (now NCP) have relatively stronger societal roots compared to the new ones. But we cannot deny the fact that the conventional political parties have not been able to rise above vested interests of handful of individuals within the party and groups outside the party whose key concern is to remain in power.  This trait has seeped into ‘alternative’ political forces as well.

An alternative political force should show determination to work with the bottom-up approach and serve the people. It should in no way be about the seizure or concentration of power in few hands but rather about transferring power to the people.

One major reason why political parties—old and new alike—are unable to lead the change is because they are not yet ready to transfer power to the people and are lost in power game within and outside.

Bibeksheel Sajha Party has split into Bibeksheel Nepali Dal and Bibeksheel Sajha. Let us hope that these parties will remain committed to working for the common good of people and the country by reviving their earlier enthusiasm.

Otherwise, they might exist but they won’t be able to make any impact in national politics.