Discontent in PM's party over choice of ministers 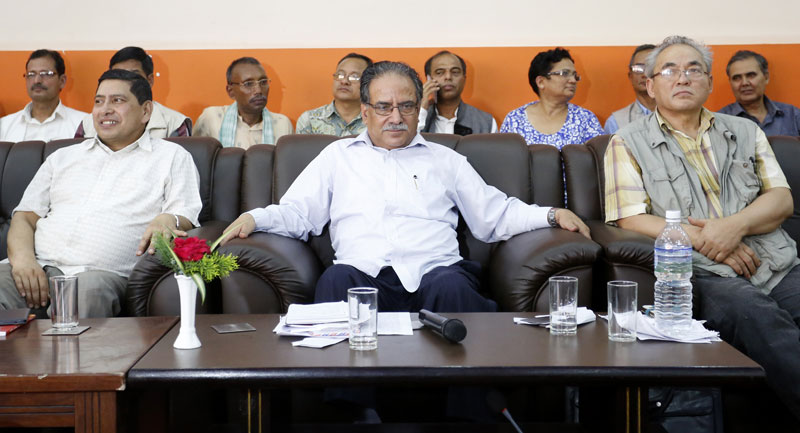 KATHMANDU, Aug 15: Serious dissatisfaction has surfaced within the governing CPN (Maoist Center) as some key aspirants for ministerial posts were not included in the cabinet expansion on Sunday.

The ministerial aspirants from the party expressed dissatisfaction with the party leadership over the selection of  ministers, pointing out that it flouts the spirit of proportional inclusion from different communities and regions.

“While quitting the Oli government, Dahal had claimed that the exit was for a cause, for addressing the issue of  diversity of regions, ethnic groups and minorities, but now it has become clear that it was nothing more than he himself becoming prime minister,” said Maoist lawmaker Prabhu Sah, one of the aspirants from the party for ministerial appointment.

In its effort to ensure the representation of Madhes in the government, the other coalition partner Nepali Congress chose a high-profile position for Madhesi leader Bimalendra Nidhi, but the Maoist party couldn't find any Madheshi candidate for a senior ministerial post, said Sah. Nidhi has been appointed deputy prime minister and home minister.

“I was offered the Ministry of Law, which I have already headed in the past, but I have no interest in that ministry again as it can make no direct impact on the general public,” he said. “If PM Dahal really respects the Madhesi people's demand for representation, he should have appointed me local development minister as that post connects directly with the Madeshi people.”

He also accused the prime minister of promoting leaders from his own coterie instead of going for broader representation and competence.

“It shows that the party chairman hasn't freed himself of his factional mindset and that I am still taken as someone from a faction led earlier by Baburam Bhattarai even though the latter has already left the party and formed his own party,” said Sah.

Simila\ly, Maoist lawmaker Sita Nepali, for whom also a ministerial appointment was much anticipated, expressed dissatisfaction over the party leadership's failure to select ministers based on the principle of proportional representation.

“It is surprising that there is not a single female cabinet minister from our party although it has been championing that very agenda,” Nepali told Republica. “We are not in a decision-making position for selecting cabinet ministers, so there is no choice but to accept the decisions taken by top leaders.”

President Bidya Devi Bhandari has administered the oath of office and secrecy to the five new ministers at a ceremony organized at the Office of the President, Sheetal Niwas.

Prime Minister Dahal has administered the oath of office and secrecy to the four new ministers of state at the Office of the Prime Minister and Council of Ministers.