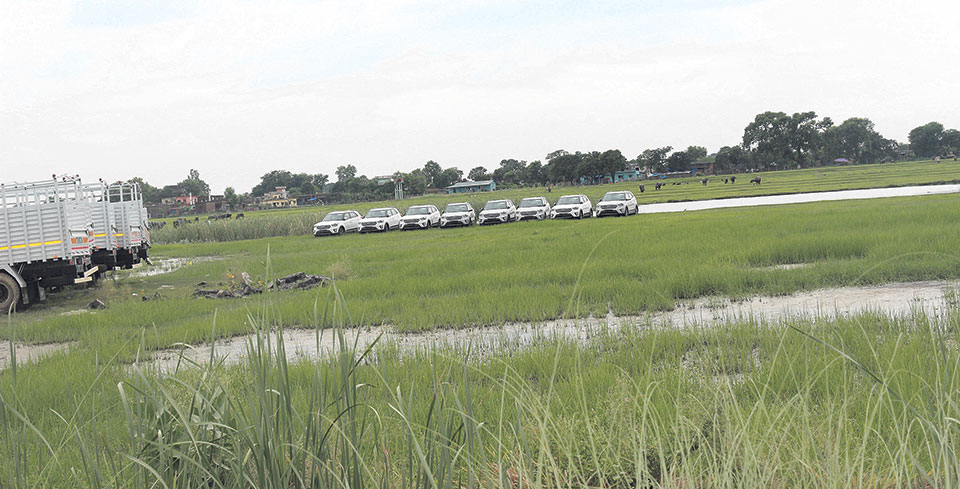 BUTWAL, March 18: Although the land acquisition process for the Integrated Check Post at Bhairawaha was completed seven years ago, its construction work has not yet begun. With the aim to ease cross border trade between the two nations, Nepal and India had agreed to set the ICP at Bhairahawa in 2064 B.S.

The agreement between the two nations was to acquire land from both sides of the border while the Indian Government would finance and give technical support to the project. However, with no interest shown from India’s part on fulfilling this agreement, the project has been left unattended.

The Government of Nepal has already acquired 52 bigha of land for the purpose, according to Town Development Authority (TDA), Bhairawaha. The acquired land has been surrounded with wire fences and a security post building has been constructed, according to Niraj KC, an engineer of TDA.

Out of the total acquired land, 20 bigha is being utilized as a dry port while the rest has turned into a grazing area for cattle. On the other hand, land acquisition for the ICP is yet to begin at the Indian side of the border.

“We have completed all the work necessary from our part, however, the Indian side has shown little interest on completing their share of work,” said TDA Bhairahawa chief, Suresh Yadav. Knowledgeable sources across the border say that the locals have obstructed the government’s actions to acquire land However, the Indian government has been able to restrict construction of any physical structures across the border and the compensation process for the land owners in India is in its last phase.

The Bhairahawa Customs is the nation’s second largest customs point. Every day, hundreds of vehicles carrying goods enter and depart the nation through the Sunauli-Belahiya transit.  Both sides of the transit boasts of a busy marketplace alongside a narrow road through which the containers loaded with goods pass. The lack of a customs office is evident in the bordering area as the customs check has to be conducted in the road itself. As a result, a four to five kilometers long queue of trucks is seen daily.

“Due to the traffic, trucks carrying goods are stuck at the border for days. This increases the cost of import and transportation as additional delay charges need to be paid in such cases,” explained Shanta Kumar Sharma, president of the Customs Agent Association. Due to the additional chargers, importers are opting for alternative transits to avoid additional charges.

Speaking with Republica, Siddharthanagar Federation of Nepalese Chamber of Commerce and Industries stated, “The government must speak with the Indian government in order to begin ICP construction.  As this project concerns economic development of Province 5, both the central and federal governments must make an effort to resolve this problem.”

According to the spokesperson of Ministry of Urban Development, Shambhu KC, there has been a secretary-level meeting between the two countries to commence work for the ICP. KC expressed his confidence towards the commencement of construction work as the Indian side has stated that they were finalizing the design for the ICP.

The primary objective of the ICP is to ease trade and commerce between the two nations. A plethora of services including a bank, customs office, livestock quarantine and customs laboratory are available. This can also curb evasion of revenue due to the high tech scanners. The agreement to set up an integrated Check Post at major transits between the two nations such as Birgunj, Bhairahawa, Nepalgunj and Biratnagar was made a decade ago. Although the Birgunj ICP is in its last stage of completion, the work for the remaining three remains halted.

Preparation in full swing to bring Birgunj ICP into operation

BIRGUNJ, Feb 11: Preparations are in full swing to bring the Integrated Check Post (ICP) in Birgunj into operation. ... Read More...