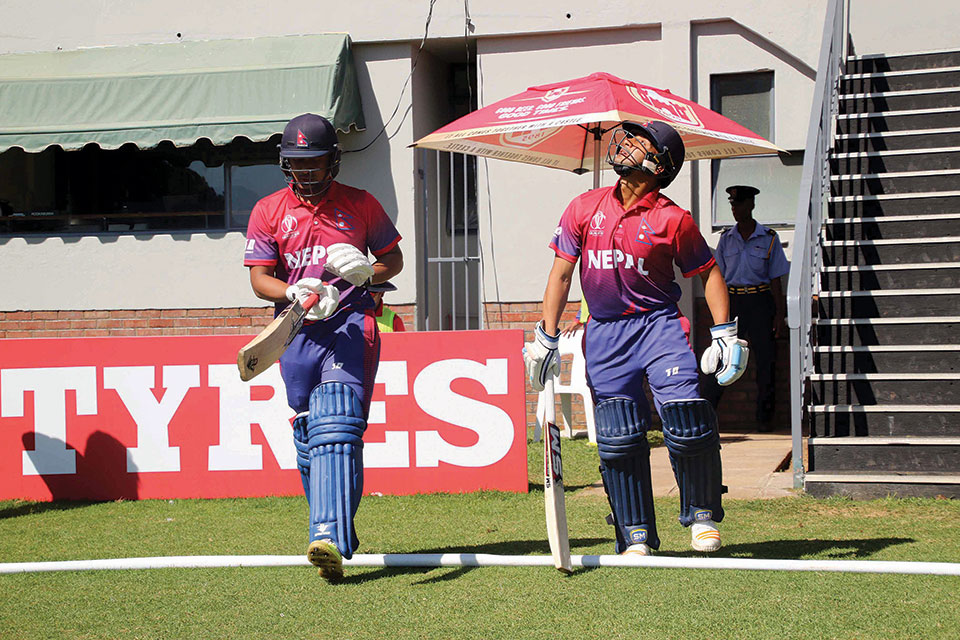 KATHMANDU, March 10: Nepal faces Afghanistan in Group B encounter of the ICC World Cup Qualifier 2018 at Bulawayo Athletic Club, Zimbabwe on Saturday. Both teams are yet to earn a point in the ongoing qualification with Afghanistan’s hopes to reach Super Sixes blurred after their third loss against Hong Kong on Thursday. Nepal can make it to the Super Sixes if the team beat Afghanistan on Saturday and Hong Kong on Monday.

Afghanistan who hardly put a foot wrong in all their triumphs in last decade -- completing every challenge from ICC World Cricket League Division leaps to ICC World Cup qualification to gaining Test status -- has suddenly lost its momentum under the leadership of mercurial Rashid Khan. Afghanistan started the qualifiers as pre-tournament favorites but their regular skipper Asghar Stanikzai remained out of the team due to appendicitis surgery. Rashid Khan replaced him to become the youngest captain in history of ODI cricket. Moreover, Afghanistan’s wicket-keeper batsman Mohammad Shahzad was banned by ICC for collecting demerit points.

Rashid was vocal in post-match conference saying some of the batsmen played irresponsible cricket after their third loss in a row in the qualifier. Similarly, Paras Khadka said Nepal needed to improve batting performances moving forward in the tournament. He also completed 1000 List-A runs for Nepal as he hit first half-century of the qualifiers against Scotland on Friday.

FORM
Nepali bowlers struggled to contain Zimbabwe batsmen in the first match conceding 380 runs in 50 overs. However, Nepal’s batting clicked posting a total of 264 playing full 50 overs. In the second game, Nepal won the toss and elected to bat first to cash in the runs that were in offer from Queens Sports Club wicket. Unfortunately the decision couldn’t benefit the team as the batting failed folding out for 149 runs against Scotland, relatively inexperienced in bowling attack. The bowlers tried their best but couldn’t invade the rear-guard action led by Kyle Coetzer in the middle taking his team home by four wickets. Nepal will look to give a collective performance from both their departments to keep the hope of overcoming a strong Afghanistan.

Afghanistan is struggling to hold their innings together toward the end of overs showing a common pattern of flaw in batting. They lost last five wickets for 63 runs versus Hong Kong (4/132 to 9/195), six wickets for 38 runs versus Zimbabwe (4/156 to 194 all out) and six wickets for 35 runs versus Scotland (4/220 to 255 all out). The team will be wary of another batting collapse in the absence of experienced stalwarts Shahzad and Stanikzai against the consistent Nepali bowling.

PLAYERS
Sompal Kami didn’t pick a single wicket in the opening spell of four overs against Scotland. He dismissed Brendan Taylor and Sikandar Raza in first match in last overs but the damage was already done. He is also missing an opening bowling partner with Karan KC being dropped for the time being. Khadka opened the bowling with Sompal in first game but was proved costly conceding 40 runs in first three overs. Similary, spinner Basant Regmi took the charge in second game against Scotland. In batting, both Dilip Nath and Gyanendra Malla are struggling to stitch any sort of partnership exposing the middle order to new ball. The effects were seen in last game when Dipendra Singh Airee and Sharad Vesawkar were dismissed cheaply to leave Nepal reeling on 4 wickets for 14 runs in 5 overs. With Malla being the experienced between the two, Nepal will hope to see an improved performance against the pace bowlers of Afghanistan.

Rashid has picked up four wickets in three matches so far. Hong Kong kept him wicket-less. Scotland’s Calum MacLeod and Richie Berrington launched array of reverse and sweep shots to take 68 runs from his 9 overs at the expense of latter’s wicket. Zimbabwe scraped through Rashid’s 10 overs conceding three wickets but eventually winning the match. In comparison, off-spinner Mujeeb Ur Rahman, touted as the next big thing in Afghanistan cricket, has picked up eight wickets in three matches and might posses more threat to Nepal batsmen on Saturday. Added responsibility of captainship has hampered Rashid’s on-field performances but a quality cricketer can always bounce back to haunt Nepal. Afghanistan needs a big win and its bowlers will be key against the fragile Nepali batting lineup.

PROSPECT
Scotland sealed their qualifications with 6 points from 3 games and Zimbabwe is looking good to go with 4 points after 2 games. They lead the points table. For Afghanistan to qualify for the Super Sixes, the team needs to beat Nepal and hope for Zimbabwe and Nepal to beat Hong Kong in their respective final matches. In that scenario, all three of Afghanistan, Nepal and Hong Kong will be on two points and the team with better net run rate will advance into next round.

“If we can gain something in the Nepal’s game, and then something happens between Hong Kong and Nepal, anything can happen. But the way we played in the last three games, it’s not what you expect from Afghanistan,” said Rashid Khan, after their third straight loss of the qualifiers.

Nepal, simply, needs to win both matches against Afghanistan and Hong Kong which will put them in Super Sixes. However, if Nepal lost on Saturday and won against HK on Monday, the chances to advance to the next round will get slimmer with a poor net run rate currently languishing at the bottom of the points table.

A contest between Nepal’s poor batting versus Afghanistan’s strong bowling can be matched by Nepal’s consistent bowling against Afghanistan depleted and out-of-form batting. Both teams will look to bowl first with rain predicted late afternoon in Bulawayo.