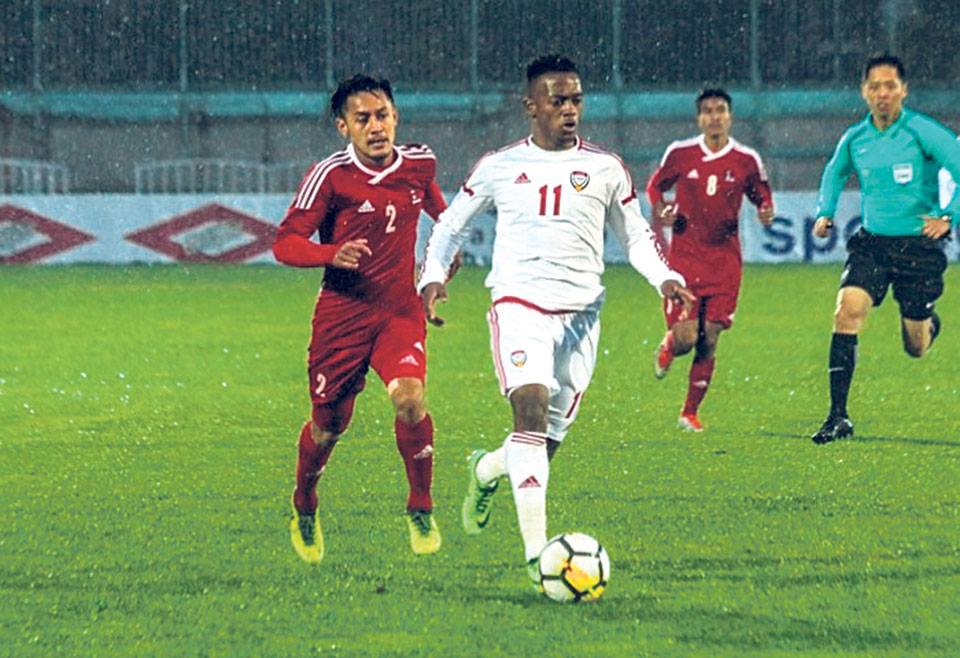 KATHMANDU, Nov 5: Nepal suffered third straight defeat in the AFC U-19 Championship 2018 Qualifiers, as it went down 1-0 to United Arab Emirates (UAE) on Saturday.

Khalfan Hassan Al Hamad’s goal was difference between two sides in Group A match.
Nepal had an opportunity to level the score in the last moment but Abhisekh Rijal, failing to capitalize a penalty, dented the SAFF U-18 Champion’s hope of earning the first point of the tournament.

Defeat to UAE at Dolen Omurzakov Stadium, Bishkek, means Nepal’s hope of securing its berth in the final round of the championship has ended.

Nepal had started the qualifying campaign with a 2-0 defeat to Kyrgyzstan and faced 4-0 loss to Bahrain in the second match. Tshering Lopsang’s side will now take on Oman on Wednesday in the last group stage match.

Nepal, which had conceded six goals in the first two matches, made comparatively stronger UAE waiting until the 71st minute for an opening goal. This time as well, Nepali defense line was the culprit as none of the defenders in the box threw strong challenge to stop Hamadi charging the shot from danger zone.

Winning team’s midfielder Khaled Mohammed Alblooshi made brilliant pass to Hamadi on the right side. The goal-scorer picked and slotted the ball into the right side of Nepali net.

Nepal had a chance to produce an equalizer in the 89th minute, when the referee gave a penalty for a foul committed by UAE’s goalie Suhail Abdulla Almutawa on Rejin Subba in 18-yard. Winger Abhisekh Rijal stepped up but failed to score from spot-kick as Almutawa saved the weak shot. Rejin had collected the ball coming from re-bound, but again Almutawa denied.

Nepal, which hasn’t scored a single goal in the tournament, finds itself in the bottom of the points table. UAE, with six points from two matches, stays at the top with superior goal difference to Kyrgyzstan, which also has equal number of points.  In the first draw of the day, Kyrgyz recorded 2-1 win over Bahrain to extend its points tally to six.

Bahrain and Oman are in the third and fourth places respectively with three points each from two matches. The two Arabian teams are only separated by goal difference.

KATHMANDU, Dec 16: Nepal suffered a one-run defeat against host Sri Lanka after it failed to hold its nerve in the... Read More...