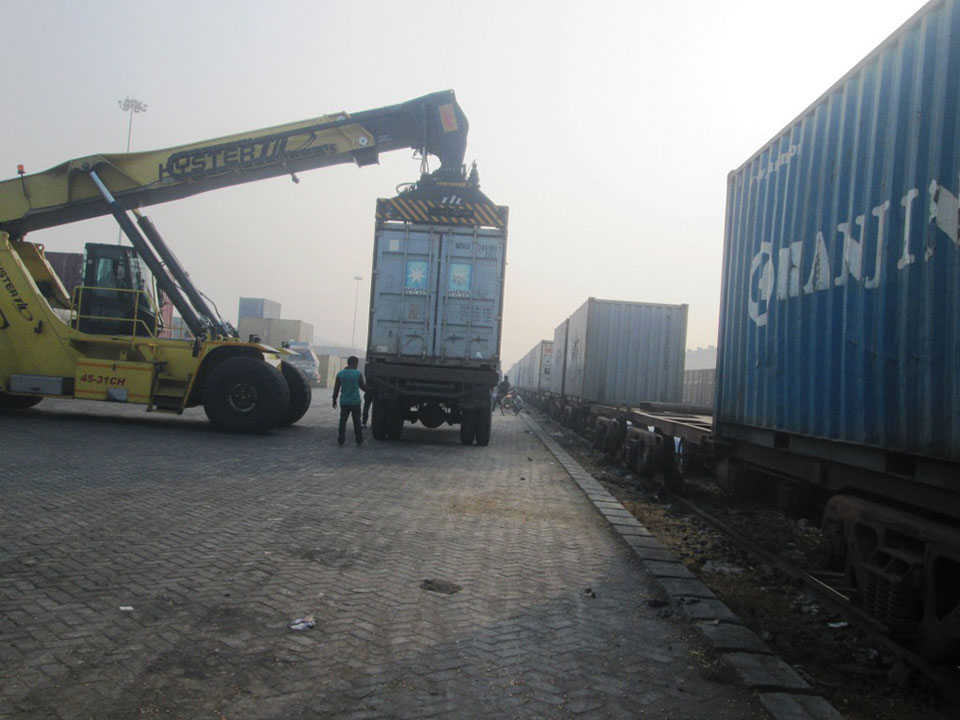 A crane unloads container from a freighter train at Sirsiya dry port in this undated photo. Photo: Republica

BARA, Feb 26: Himalayan Terminal Pvt Ltd, which oversees the management of Sirsiya dry port in Birgunj, is charging random fees in the name of handling and parking charge, traders say.

They said that the company has unilaterally started charging 10 percent more on handling fee fixed by the authorities.
According to Nepali importers, the company has started levying new fee without informing importers and the government.

“Earlier, it used to charge Rs 107 per ton of for transportation of goods via dry port,” Pradeep Kedia, former president of Birgunj Chamber of Commerce and Industry (BCCI), said. “But now they are charging Rs 118 per ton without giving us any information.” He added that importers have been forced to pay an additional Rs 20,000-27,000 per rack of goods.

The company is also charging Rs 400 for vehicle parking.

Sirsiya dry port is the only facility in the country to import goods from India and other countries via railway. Most of the goods come here via Kolkata and Vishakhapatnam ports of India.

Around 75 to 82 racks of goods are being transported into the country via Sirsiya dry port. The increased free means importers are forced to pay more than Rs 2 million every month, Kedia told Republica.

The dry port was built with an assistance of US$ 802 million from the World Bank to facilitate Nepal's import-export trade.

Kedia further said that they have already notified the government about the random fees levied by Himalayan Terminal. “We have sent a letter to the Ministry of Commerce and Nepal Intermodal Transport Development Board. But the government authorities are not taking any action,” he added.

Industries in Birgunj-Pathlaiya corridor, Hetauda corridor and other industrial areas import more than 60 percent of their raw materials from this dry port.
Meanwhile, Anibesh Kumar, senior manager of Himalayan Terminal Pvt Ltd, said that they have increased handling charge by 10 percent as per the existing rule. “Importers are opposing this because they seem to have misunderstood the rule,” he added.

According to Kumar, Himalayan Terminal holds the license to operate the dry port for five years starting January 2015. As per the contract, we can increase fee by 10 percent after three years.

Commenting on parking fee, Kumar said the company was charging fee after finding that vehicles were being there for more than one day.

Goods imported from India, China, the Philippines, Singapore, Thailand, Italy, USA and Germany, among others, enter into Nepal via this dry port.

KATHMANDU, July 7: The private schools have been charging admission fees for grade 11 against the rules. The schools are... Read More...

KATHMANDU, May 16: Private medical colleges under Tribhuvan University have breached the rules by charging additional fees which exceed the ceiling... Read More...

KATHMANDU, Jan 30: MBBS students under the Institute of Medicine (IOM) staged a protest at Maitighar here Monday against the... Read More...