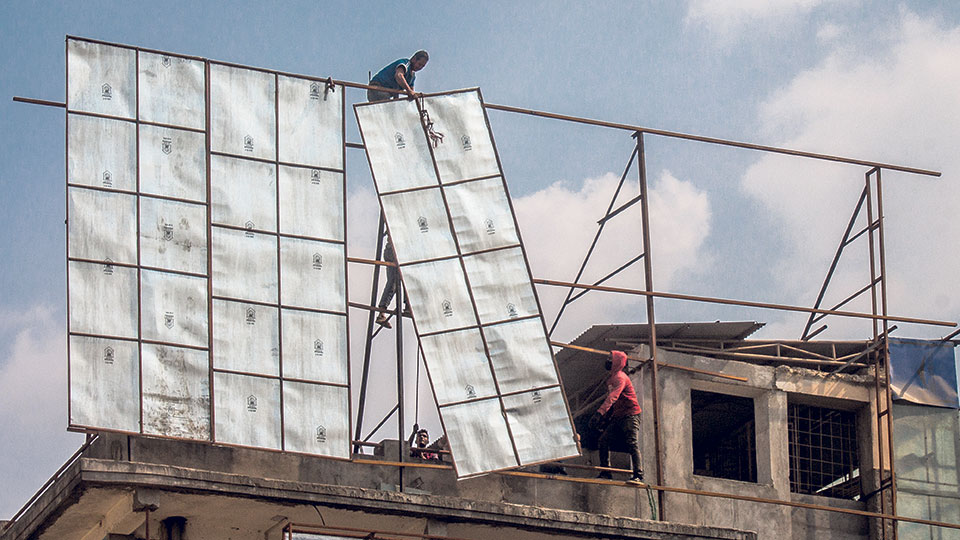 BHAIRAHAWA, Feb 20: Locals of Tilottama Municipality have launched a protest against the Department of Railways (DoR) after the latter sent its staffers to different parts of the municipality survey the area for laying down tracks of East-West Railway line.

The survey work was halted for nearly two years following protest by locals of Butwal.
Locals say they launched the protest after some people, identifying themselves as representatives of DoR, surveyed the area and erected pillars. Pillars have been erected at Shivachowk, Devisthan, Naya Mill, Dasnambar and nearby areas of Tilottama Municipality Ward No 1 to 4.

Tikanidhi Gautam of Shivachowk in Tilottama-1 said that few people entered into his compound last week and erected pillars, claiming that they were the member of survey team deployed by the DoR. “They told me that the track, which was supposed to pass through Kalikanagar of Butwal, will now be built in Tilottama,” added Gautam.

Locals like Gautam said the survey team reached the area without giving any prior information. They said that around 5-7 kilometers in Tilottama-1 to 4 have been surveyed. 'RWBM' have been inscribed on the pillars, while signs like 'RNR1' and 'R2' have been pasted on electricity poles and trees, among others.

Meanwhile, locals have formed a struggle committee including representatives of all political parties. The committee has uprooted the pillars and removed signs pated on electricity poles and trees, Madhavlal Devkota, a member of the struggle committee, told Republica.

The DoR has already prepared Detail Project Report (DPR) for Tamsariya (Nawalparasi)-Butwal section of the East-West Railway. After knowing that the railway track passes through Kalikanagar of Butwal, locals of Butwal had protested against the DoR. Due to pressure from political leaders of that area, there was a proposal to change the track to five-seven kilometers southward toward Tilottama.

Prakash Bhakta Upadhyaya, the senior divisional engineer of DoR, said that the department has not conducted any survey in Tilottama Municipality. “Our staffers only made a field observation to see if Tilottama Municipality is feasible for the railway project. But we dropped the idea because the area has densely populated villages,” Upadhyaya told Republica. “The Kalikanagar area is suitable for the project.”

Upadhyaya also said that the project will be affected if locals of Butwal do not stop their protest.

The East-West Electric Railway Project that links Kakarbhitta of Jhapa with Gaddachowki of Kanchanpur is a national pride project. According to the DoR, engineering survey in most of the places in Kakarbhitta-Bardibas-Butwal and West Butwal-Lamahi-Gaddachowki is at the final stage.

BANKE, March 15: Survey for a railway connect that connects Indian town of Rupaidiya with Kohalpur of Banke has begun. ... Read More...

BANKE, Mar 15: Survey for a railway connect that connects Indian town of Rupaidiya with Kohalpur of Banke has begun. ... Read More...